The Indianapolis Public Transportation Company, known as IndyGo since 1996, is a municipal corporation that provides bus service to the metropolitan Indianapolis area. 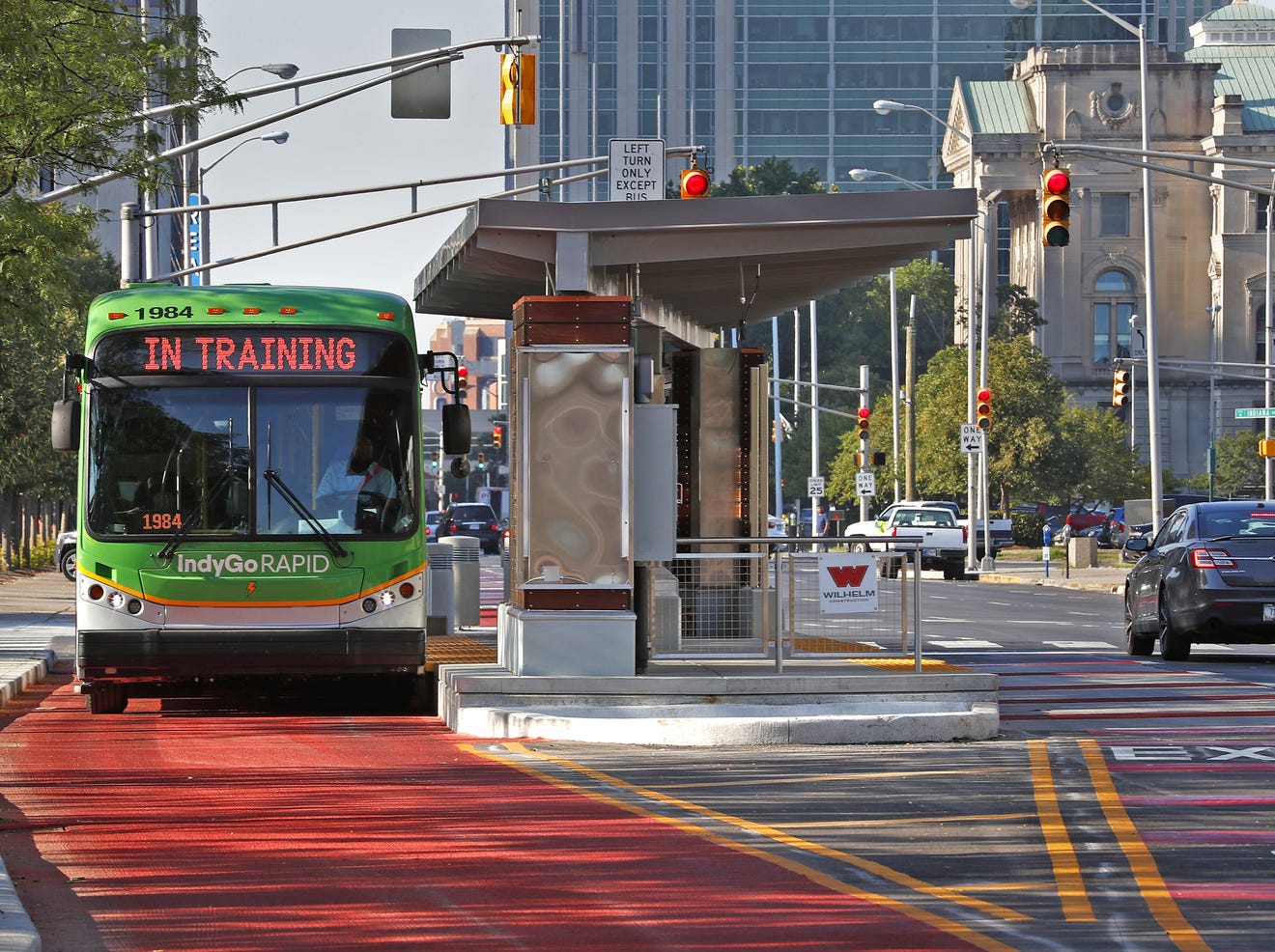 Throughout the 1970s and 1980s, Metro’s ridership fluctuated. Beginning with a ridership of 12.8 million in 1975, the system’s usage peaked in 1984 with 15.5 million passengers. In the 1990s, a steady decrease in riders occurred, reaching a low annual ridership of 7.6 million passengers in 1992. That same year, Metro cut many express routes and downtown services to avoid a budget shortfall.

With the system’s rebranding as IndyGo, express routes were reinstated to increase the number of passengers and to attract new riders from outlying areas of Marion County and surrounding counties. New express routes were added to Greenwood, Carmel, and Fishers. Express service was also added to the Indianapolis International Airport in 2007. However, by 2010, all express lines were discontinued or merged with preexisting fixed routes.

In 2012, IndyGo’s number of passenger rides had declined to 8 million annually. In an effort to improve connectivity, IndyGo broke ground in 2014 on a new transit center in downtown Indianapolis. The Julia M. Carson Transit Center opened for service in June 2016 and allowed for a more centralized transfer system.

In 2014, the Indiana General Assembly passed a law that had direct implications for public transit in Indianapolis. It put in place provisions to hold a referendum in Indianapolis for mass-transit projects. It also added a clause that required IndyGo to establish a nonprofit foundation and to raise privately 10 percent of its operating costs, or an estimated $5 million and $6 million annually.

In 2017, the Indianapolis City-County Council passed a measure allowing for a 0.25 percent income tax increase to spend on mass transit. This tax increase, along with a Federal Transit Administration Small Starts $75-million grant, spurred the creation of Indianapolis’s first bus rapid transit system. In 2018, construction began on the first phase of this plan—the Red Line. The Red Line services the central portion of Marion County, starting in Broad Ripple and traveling south to the University Of Indianapolis. 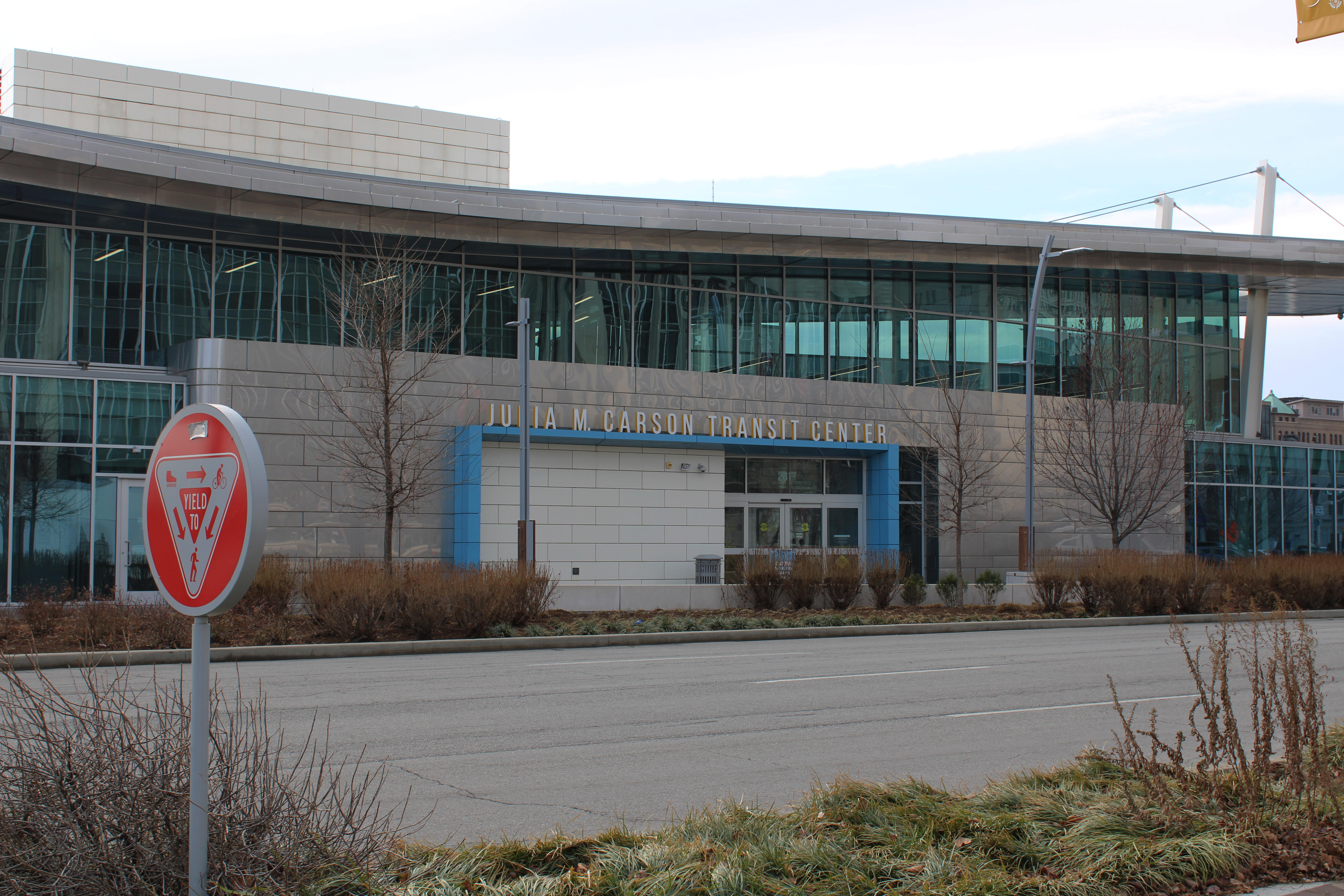 Revenue service on the Red Line began operating in September 2019. By 2020, IndyGo operated 31 fixed routes using 212 buses servicing roughly 7,000 stops, as well as a paratransit service known as Open Door. Serving customers with disabilities who are not able to take advantage of fixed routes, its ridership in 2019 was 8.5 million passengers.

The COVID-19 pandemic led to an overall decline in ridership of 51.8 percent from 2019 to 2020, from over 9.2 million in 2019 to around 4.8 million in 2020, which mirrored the experience of public transit systems across the country. IndyGo eliminated fares in response, but it also had to cut some of its services. In June 2020, it had to postpone its plans to begin a new efficient grid network, improved frequency, and longer service hours because of the effects of the virus. 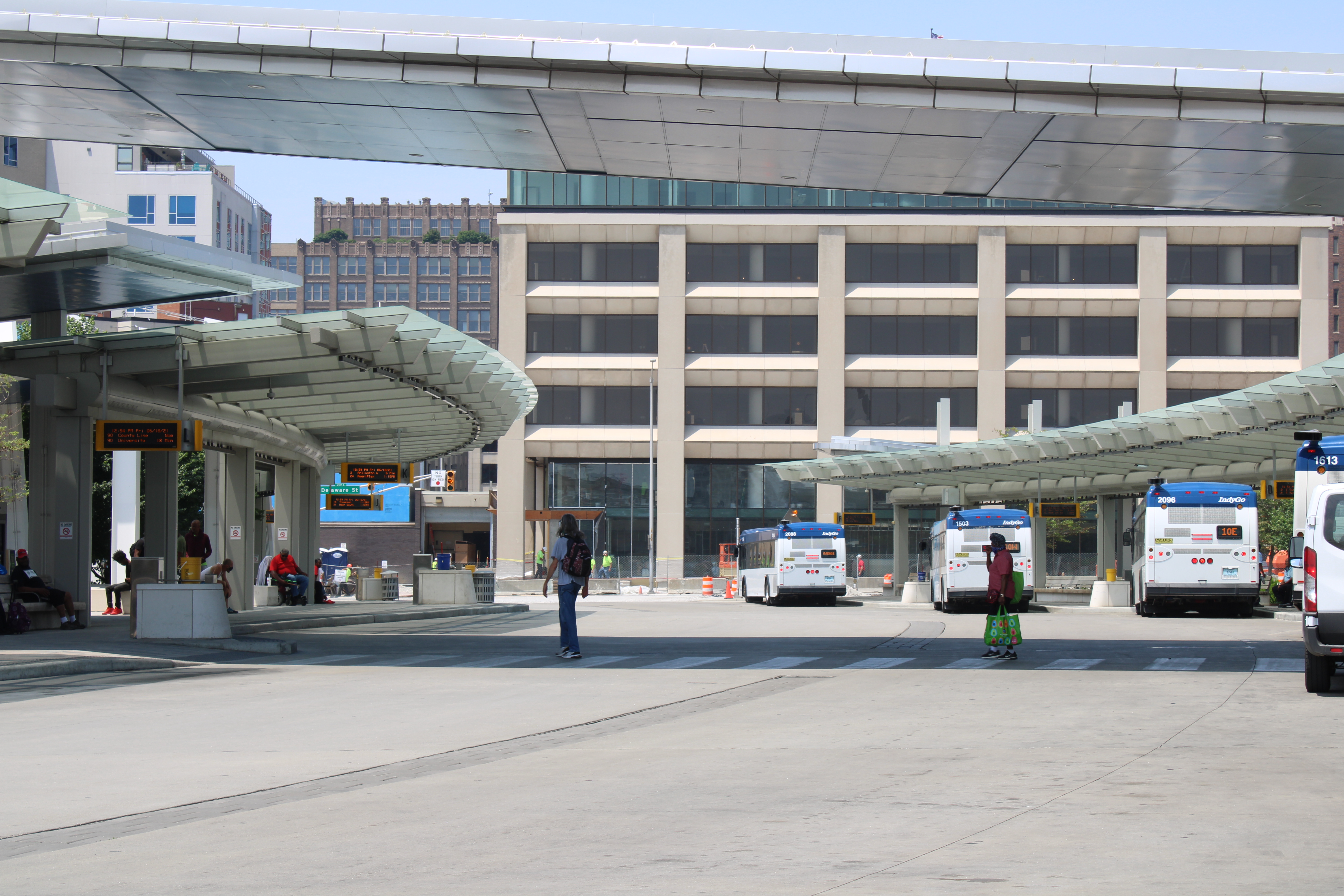 Passengers on their way to their bus stop at the downtown transit center, 2021
Credit: Jenna Auber
View Source

Ridership on the Red Line followed the same trend. When the service began in September 2019, ridership reached nearly 246,000, but during the month of May 2020, at the height of the pandemic, only about 51,000 people rode the Red Line. The new electric buses, moreover, failed to provide the 275 miles per charge promised. The manufacturer paid for the installation of three additional charging pads in 2021.

In late December 2020, IndyGo purchased the eastside headquarters of defunct trucking company Celadon Group for $3 million to provide more functional space for staff and bus operations. IndyGo purchased more property in January 2021 to move its Open Door paratransit operations to the Haughville neighborhood on the city’s near-west side.

Planned expansions of IndyGo’s rapid transit system, serving Lawrence on the Purple Line, and an east-west service to the Indianapolis International Airport on the Blue Line, are scheduled to begin in 2022 and beyond.

As part of IndyGo’s continued effort to provide transit access to its customers, it launched an on-demand pilot project in May 2022.  Called IndyGo Connect, the service provides an affordable way for customers in southeast Indianapolis to book a shared ride in a private car that will connect them to the city’s existing public transit system.