Stokely-Van Camp is the successor to Van Camp Packing Company, an Indianapolis packer founded in 1861, and Stokely Brothers and Company, a Newport, Tennessee, canning firm founded in 1898.

Gilbert Van Camp began a canning business in the Fruit House Grocery Building on Missouri Street in Indianapolis in 1861. The company was among one of the first canners in Indiana. The fledgling company obtained its first major contract when it sold provisions to the Union Army.

By 1882, the G. C. Van Camp & Son Packing Company (incorporated 1875) was producing 8 million cans of pork and beans a year from its factory in the 300 block of Kentucky Avenue. In 1890, Van Camp began a series of full-page advertisements in national magazines, pricing his product at six cents per can. 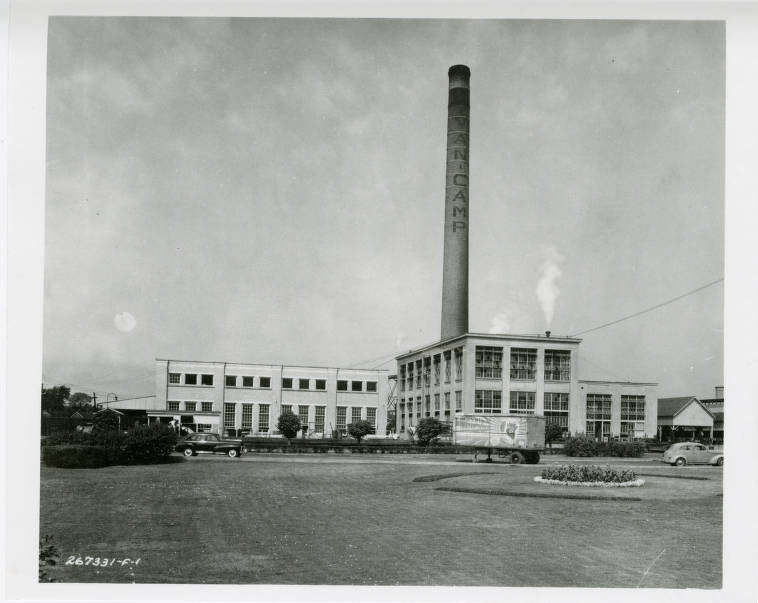 Gilbert’s son Frank is credited with adding tomato sauce to the Van Camp pork and bean recipe sometime in the 1890s, which put Indiana on the map for what previously was known as Boston baked beans. Early in the 20th century, Van Camp also began production of Worcestershire sauce and canned extra-fine tomatoes.

In 1898, Anna R. Stokely invested $3,000 in a cannery along the banks of the French Broad River in east Tennessee. She and her sons James R., George, John B., and William Burnett Stokely installed a steam engine to cook tomatoes grown on family farms prior to canning. Crates of canned tomatoes were then shipped by barge to market. Around 1908, George traveled to Indianapolis to learn about modern canning procedures from the Van Camp company.

After serving in World War I and graduating from the University of Tennessee, Knoxville, William Burnett Stokely Jr. joined the family firm, Stokely Brothers and Company, becoming its treasurer. In June 1929, he moved to Louisville, Kentucky, as president of the company. Four years later, he relocated to Indianapolis where the Stokely firm had purchased the assets of the Van Camp Products Company and Van Camp Packing Company. Stokely served as president and chairman of Stokely-Van Camp, Inc., and its numerous subsidiaries.

In 1944, Stokely-Van Camp, Inc., became the official corporate name. By the 1960s, Stokely-Van Camp owned and operated more than 70 plants in 17 states, Canada, and Venezuela. The company’s flagship plant at 2002 South East Street was one of the world’s largest tomato packing facilities. In 1967, the company acquired the rights to produce and market the now-successful Gatorade line of beverages.

The 1980s brought significant changes to Stokely-Van Camp. The company sold its frozen food section to United Foods in Tennessee in 1982 and signed a licensing agreement for its fruit, vegetable, and tomato products with the Oconomowoc Canning Company of Wisconsin in 1983. The next year, food giant Quaker Oats, in a spirited bidding war with Pillsbury, acquired Stokely-Van Camp.

In 1985, Quaker Oats sold the Stokely label to the Oconomowoc Canning Company, which changed its name to Stokely USA and markets canned vegetable products under the Stokely label. In 1993, Red Gold, Inc., headquartered in Elwood, Indiana, purchased the Stokely brand of tomatoes and its production facility in Paulding, Ohio. In 1995, Van Camp’s was sold off to ConAgra. Gatorade and Quaker Oats were, in turn, bought by PepsiCo in 2001.