Although not recognized for its ethnic diversity, Indianapolis attracted periodic waves of foreign immigrants in the 1830s to 1850s (Germans and Irish) and the late nineteenth and early twentieth centuries (Eastern European). Local residents responded in contradictory fashion by promoting assimilation but also by expressing themselves at times in a protectionist, racist, and hateful manner.

Nativism, or an antipathy toward aliens, their institutions, and ideas, was evident in Indianapolis during the 1850s. It appeared in the guise of the American Party (also known as the Know-Nothings) that sought to protect the nation against an invasion of foreigners, paupers, and Catholics. Members were concerned that Irish and German immigrants (who were predominantly Catholic) were acquiring greater political power, especially within the Democratic Party.

Compared to cities like Cincinnati, however, Know-Nothingism in Indianapolis was fairly mild. Nativist sentiments were heightened briefly during the October 1853 visit of exiled priest and Italian patriot Father Alessandro Gavazzi, who warned Americans against the supposed Papist threat. Likewise, while naturalized Irish and German voters demonstrated against temperance legislation, Know-Nothing sympathizers called for electing only native-born Americans to political office and enacting more stringent naturalization and immigration restriction laws. In response the local Democratic Party, which garnered political support from naturalized voters, condemned any organization “that would aim to disrobe any citizen, native or adopted, of his political, civil or religious liberty.”

Although foreigners posed no threat to Indianapolis, nativism still permeated society. In 1856 the City Council adopted a resolution allowing German pupils in local schools to have instruction in their own language. School trustees opposed the policy and never implemented it. Consequently, Germans (primarily Freethinkers) organized the German-English Independent School in 1859 to educate their children in German and to preserve their native culture.

Few Germans enrolled their children in the public schools—a decision that brought public criticism—but Germans defended their system of bilingual education as actually hastening the Americanization process. By 1869 the Indiana General Assembly recognized the value of German when it authorized German language instruction in public schools if parents petitioned for it. 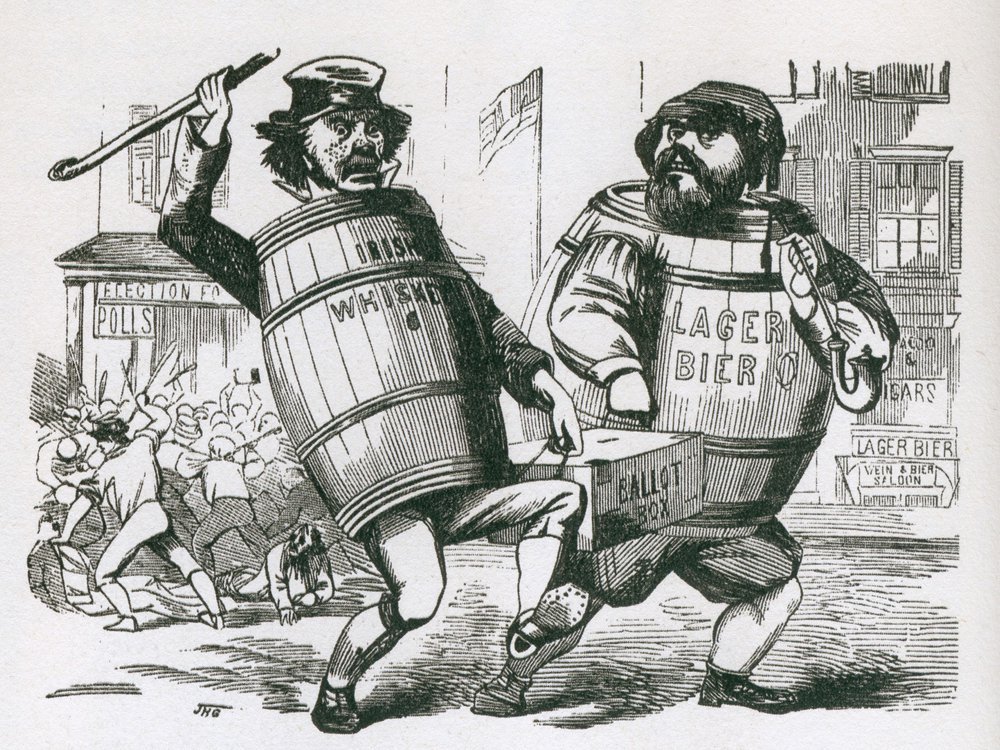 The Civil War proved to be a unifying force in the city and allowed the Germans and Irish to demonstrate their loyalty by raising companies of troops to serve in the Union army. During Reconstruction, however, ethnic tensions resumed as the newly freed and enfranchised African Americans (who supported the Republicans) confronted the predominantly Democratic Irish. The Democrats’ anti-Black sentiments were countered by anti-Irish attacks in the Republican-oriented Indiana Journal, which criticized the Democrats for importing “Irish tramps,” “Hibernian heifers,” and “Romanish herds” to vote in local elections. The arrival of eastern European immigrants in the 1880s and 1890s intensified nativist sentiments in Indianapolis.

Scattered incidents by the American Protective Association (APA), an Iowa-based organization devoted to excluding Catholics from public office, elicited responses from the secular press repudiating the use of religious intolerance in politics. Likewise, Rev. Oscar C. Mcculloch of Plymouth Church strongly condemned the prejudice against Catholics that many Protestants held.

By the early 20th century large numbers of southern and eastern Europeans had moved to Indianapolis to work in the city’s industries, settling primarily in Ward 12, known as the “Foreign District,” bounded by Washington Street to the north, Ray Street to the south and the White River to the west. Local leaders, including John H. Holliday and James A. Collins, founded the immigrants’ aid association (1909) and the Foreign House, a settlement house that served the needs of recent immigrants and assisted them in assimilating into American society.

In his paper “The Life of Our Foreign Population,” Holliday argued that immigrants should abandon their cultural separateness and assimilate quickly. Through the settlement house’s Americanizing programs on domestic chores, personal hygiene, and cooking, immigrants could attain an “American” standard of living. The most successful program was the night school, which taught English, academic subjects, citizenship, and vocational education. While supporters of the settlement house clearly considered immigrant culture to be useless in American society, many immigrants resented the intrusion of the settlement into their family life and turned to their ethnic community to resist Americanization.

World War I heightened nativist feelings that had lain dormant for some years. Many Indianapolis Germans chose to support their homeland in the conflict. Their decision fueled anti-German rhetoric, symbolized by Lucius Swift’s caustic anti-German paper read before the Indianapolis Literary Club in October 1915.

When the United States finally entered the war Americanization of the nation’s foreign-born population became a top priority. The locus of that activity, however, shifted from the settlement house to the public school, thereby reflecting Americanization’s change in emphasis from benevolence to patriotism. As schools fought to prevent disloyalty and sympathy for the German cause, citizens fiercely opposed the continued presence of German language courses in the schools. In January 1918, the Board of School Commissioners passed a resolution declaring that “public schools…should not assist in perpetuating the language of an alien enemy in our homes and enemy viewpoints in the community.”

Nativism intensified during the war and took its toll in the German community. The Indianapolis Star of December 7, 1917, filled two pages with the names of 800 unnaturalized German residents who resided near munitions production sites, thus suggesting their threat to national security. In June 1918, the Telegraph And Tribune (with roots back to 1865) suspended publication. Some Germans anglicized their names and those of their institutions (Das Deutsche Haus became the Athenaeum) to avoid the nativist-inspired vandalism of their property. The vast majority of the German American population, however, did not change their names. To prove their loyalty and assuage their critics local Germans joined the U.S. military and actively participated in bond drives. Even after the war’s end local opposition to German culture remained strong. This continuation of anti-German sentiment was expressed most overly in state legislation. In January 1919, the Indiana General Assembly banned German from Indiana’s schools.

Among the largest public events held in Indianapolis during the war was the Americanization Day Parade of July 4, 1918. Organized by the Marion County Council of Defense, the parade was intended for “all loyal citizens, no matter of what extraction, to show their Americanism and patriotism.” Thousands of people swelled Monument Circle where segments of the community, especially the foreign-born, were symbolically placed within the parade to demonstrate their assimilation. Germans who had traditionally celebrated “German Day” in October marched with the American flag as the “Friends of German Democracy.” Slovenes attired in folk costume marched with the banner, “Slovenians: We Are For America First, Last, and All the Time.” Romanians sponsored a float representing Uncle Sam’s victory over autocracy.

The spirit of “100 Percent Americanism” permeated the city in the postwar years. Indianapolis became the home of the American Legion, a veterans organization founded in 1919 to foster patriotism. The Indiana State Board of Education declared October 24, 1919, to be “Americanization Day.” With the 1920s “Red Scare” antiradical nativism evident in the war expanded to include anti-Semitism and increased the pressure for Americanization.

Although the Federal Bureau of Naturalization called for communities to mount a “full, red-blooded American campaign” to convert adult foreigners to American citizens, the American Settlement (formerly the Foreign House) emphasized how immigrants already shared American values and had improved their lot in life. To show the success of Americanization, the local press reported in 1925 that “there is no unrest, no red [communist] problem at all among these people.”

Thousands of Indianapolis residents joined the Ku Klux Klan in its “100 Percent Americanism” campaign, which appealed to patriotism, Protestantism, and racial purity. Although they opposed African Americans, the Klan’s principal targets were Catholics for their alleged immorality, anti-democratic tendencies, and allegiance to a foreign power, and Jews for their predominance in the economic sector. Upon gaining control of state and local governments in the mid-1920s, the Klan pursued a legislative agenda of Americanization and education, an effort that faded with the eventual demise of the Klan.

By the 1930s local leaders of Americanization no longer viewed immigrants, their cultures, and religions with grave suspicion. Given the marked changes in the foreign community, Americanization had apparently succeeded in instilling the proper values among the immigrant population and creating, as one newspaper reporter concluded, “a class of useful, loyal, and intelligent American citizens.” This was most obvious during world war II as the number of antiforeign incidents was minimal compared to earlier decades Nativist sentiments again surfaced during the Korean War.

Since the 1990s, the Indianapolis metropolitan area has become more diversified with an influx of immigrants from Latin America and Asia. Nativist sentiments have since continued to surface periodically, usually accompanying periods of national crisis—the Iranian hostage crisis, the Persian Gulf War, and 9/11, for example. In the late 2010s, there was a resurgence of antisemitism. In July 2018, the synagogue of the Congregation Shaarey Tefilla in Carmel was vandalized. There also have been some incidents that reflect anti-Islam or Islamophobic sentiment.