Likens was lying on a soiled mattress on the floor of an empty upstairs bedroom. Her body was covered with cuts, severe bruises, and a variety of open sores—some from over 100 cigarette burns, peeling scald marks, and missing skin. She had two black eyes, shredded lips, and fingernails broken backward. Further, Likens’ body showed evidence of malnutrition. A “3” was branded on her chest, and the words “I am a prostitute and proud of it” were etched into her stomach. The official cause of death was a subdural hematoma from a blow to the temple, but shock and extensive injuries contributed to her death.

Jenny Likens approached the investigating officers and offered to make a statement, provided she was immediately removed from the home. 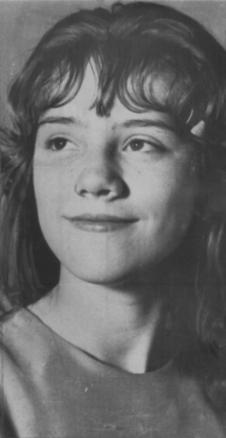 Over the next several days, police took the entire Baniszewski family and eight neighborhood children into custody. Anna Cisco, 13, Michael Monroe, 11, Randy Lepper, 11, and Judy Duke, 12, were charged with injury to a person. All would later be released under subpoena as state witnesses. Baniszewski’s youngest children Marie, 11, Shirley, 10, James, 8, and Dennis Wright Jr., 1, were placed in separate foster homes.

In December 1965, a grand jury indicted Gertrude Baniszewski, her daughters Paula, 17, and Stephanie, 15, and her son John Jr., 12, and two neighbors, Coy Hubbard and Richard Hobbs, both 15, on charges of first-degree murder.

The highly publicized April 1966 murder trial drew national attention. The testimony revealed that Gertrude Baniszewski had supervised and assisted her own and other neighborhood children in the daily torture of Likens. Sylvia Likens spent the last weeks of her life shut in the basement of the house without access to food or water. Neighbors who were aware of Likens’ condition in the Baniszewski household had not interfered.

Gertrude Baniszewski pleaded not guilty by reason of insanity. She was found guilty of first-degree murder and sentenced to life imprisonment. The judgment was reversed on appeal in 1970, and a new trial was ordered with a change of venue. The 1971 retrial again found her guilty of first-degree murder. In 1985, she was granted parole, despite a public petition protest that raised over 40,000 signatures. She died in Iowa, from lung cancer, on June 16, 1990, aged 60.

The corner home of Gertrude Baniszewski where Sylvia Likens was tortured and murdered. Two houses to the right is the home of Richard Hobbs.
Credit: David Brady, IndyStar
View Source

Paula Baniszewski was found guilty of second-degree murder and was sentenced to life imprisonment. Also granted a new trial on appeal in 1970, she pleaded guilty to involuntary manslaughter in the 1971 retrial and was sentenced to 2 to 21 years. She twice escaped from prison and was granted parole 2 years later.

Stephanie Baniszewski, who voluntarily testified for the state, was granted a separate trial, found not guilty, and released. Coy Hubbard, Richard Hobbs, and John Baniszewski Jr. were all convicted of manslaughter and sentenced to 2 to 21 years. They served 18 months and were released on parole in 1967.

Coy Hubbard died on June 23, 2007, from a heart attack. Richard Hobbs died of lung cancer on January 2, 1972, at the age of 21. John Baniszewski Jr. lived in relative obscurity under the alias John Blake. He became a lay minister, frequently hosting counseling sessions for the children of divorced parents. He died of diabetes on May 19, 2005, at the age of 52.

In 2007, An American Crime, a movie based on the Likens’ murder, debuted at the Sundance Film Festival. That same year, Starz Home Entertainment released The Girl Next Door, adapted from the 1989 horror novel of that name by Jack Ketcham which also is loosely based on the notorious murder.

House of Gertrude Baniszewski Where Likens was found on October 26, 1926