During the 19th century and into the first decades of the 20th century, beer brewing in Indianapolis, as in the rest of the United States, was predominantly a German enterprise. William Wernweg, a contractor for the National Road bridges, and John L. Young, trustee of the Fifth Ward, established Indianapolis’ first brewery in 1834 on the southside of Maryland near West Street. In 1840, it was purchased by René Faux and John Philip Meikel. Within two years, Faux opened Indianapolis’ second brewery on the eastside, at Washington Street and College Avenue. At that point, J. P. Meikel bought the old “Carlisle House” on the corner of Washington and then California streets to establish his brewery, which operated until the Panic of 1873. These and other early breweries produced what was called “strong beer”—neither ale nor lager.

The first successful brewery in the city, which gained popularity with its lager, was established in 1859 by Christian Frederick Schmidt and Charles Jaeger. In a few years, Jaeger sold his interest to Schmidt, at which time the brewery had annual sales of about 1,500 barrels. The marked superiority of this bottom-fermented beer, the development of taverns as “tied-houses,” plus the concentration of troops in Indianapolis during the Civil War, were major factors in the success of the Schmidt Brewery. When C. F. Schmidt died in 1872, his widow Caroline operated the business with the help of her brother William Fieber until his death in 1874 and then by herself until her death in 1877. Her sons, John W. Schmidt and Edward Schmidt, then took over. They are noted as the first U.S.- born citizens to operate an Indianapolis brewery. By 1886 Schmidt Brewery had agencies in Terre Haute, Crawfordsville, Columbus, Brazil, and Shelbyville, Indiana, and Danville, Illinois.

At the time of the Civil War, Frank M. Wright and W. S. Downer opened Indianapolis’ first “Ale House” at what now is North and Blake streets. In 1865, Casper Maus & Co. opened at the corner of West New York Street and Agnes (renamed University Boulevard). Both are recognized with markers on the Indiana University-Purdue University Indianapolis (IUPUI) campus.

In 1863, Peter Lieber, with his brother Herman and Charles Mayer, bought the Gagg & Company brewery that had been founded in 1859. In 1871 the Lieber Brewery was relocated to Madison Avenue, south of Morris Street (the Eli Lilly and Company campus). Lieber’s beer was bottled by Jacob Metzger and Company in a plant across the street from the brewery. (Prior to 1890 the Internal Revenue Department required that the bottling of beer had to be separated from the brewery proper by a street and that the beer had to be barreled and a tax stamp applied before transporting it to the bottler.)

In October 1889, the Schmidt and Lieber breweries combined with the Maus Brewery to form the Indianapolis Brewing Company, which was owned by an English syndicate. Initially, the three breweries all continued to operate, with the general office and bottling operations located at the Schmidt plant. In 1900 the Indianapolis Brewing Company’s Dusseldorfer beer won a gold medal at the Paris Exposition. It also won the grand prize at the Louisiana Purchase Exposition at St. Louis in 1904 and the gold medal at Liege, Belgium, in 1906.

Breweries emerging at the end of the 19th century included the Home Brewing Company (1891) established by William P. Jungclaus, August Hook, and others, at Cruse and Daly streets and, at the corner of Ohio and Missouri streets, Joseph C. Schaf’s American Brewing Company (1897). In 1914, Schaf founded and sponsored ABC’s professional baseball club. J. C. Schaf is cited as the first native-born to found a brewery in Indianapolis. Charles Krauss, John J Giesen, and Victor Jose established Capital City Brewing Company in 1905.

On January 17, 1920, the 18th Amendment to the U. S. Constitution went into effect, banning the manufacture, sale, and transportation of alcohol, including beer made at home. In 1934, following Repeal on December 5, 1933, Richard Lieber, already known as the “father of Indiana’s State Parks System,”  unsuccessfully tried to re-establish Indianapolis’ brewing industry. In 1989, a new Indianapolis Brewing Company opened as a production brewery for a brief interlude. 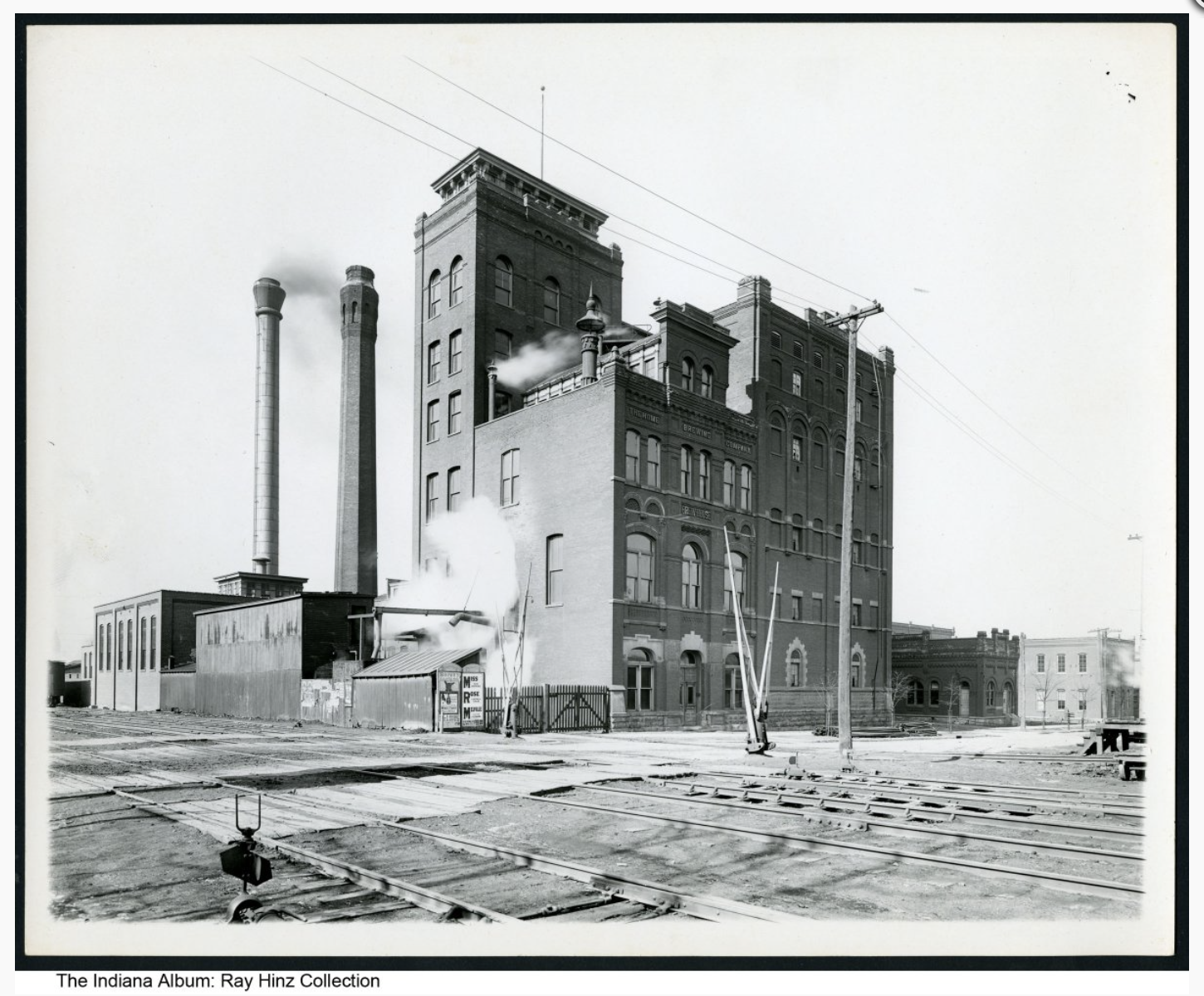 With Circle Centre Mall in 1995 came Alcatraz Brewing Company, followed by Rock Bottom Brewery and Restaurant in 1996, and The RAM Restaurant and Brewery in 2000, as downtown Indianapolis’ craft beer destinations for the emergent sports and conventions industries. Other craft brewpubs briefly opened in various neighborhoods. In 2004, Ted Miller and his wife Shannon Stone, with backing by former Broad Ripple High School classmates, opened Brugge Brasserie as a Belgian-themed brewpub. It fell prey to the effects of the COVID-19 pandemic and closed in 2020.

After Bier Brewery and Taproom opened in 2010 at 5133 East 65th Street, alongside Great Fermentations Homebrew Supply and Education (1995), a succession of neighborhood-centric production breweries with taprooms followed. Of special note is Indiana City Brewery, in the original bottling building of Home Brewing Company. By 2020 almost every Indianapolis neighborhood has had access to a craft beer tasting room and/or brewpub as a gathering place.

While the Indiana State Fair (ISF) Brewers’ Cup Competition has had international recognition since 1999, it was not until 2014 that the Brewers of Indiana Guild, established in 2000, brought craft beer back to the Indiana State Fair as a Grand Hall Exhibition, thereby lifting the 1947 ban on beer at the fair.