The morning of February 8, 1977, Anthony G. “Tony” Kiritsis, 44, a real estate developer, entered the office of Richard O. Hall, president of the Meridian Mortgage Company, and took him hostage with a sawed-off 12-gauge shotgun. Kiritsis wired the shotgun to Hall’s neck, with a “deadman’s switch” from the trigger to his own neck.

Kiritsis forced Hall out of the building and through downtown streets in near-zero-degree weather, the entire walk surrounded by police and journalists. Kiritsis then commandeered a police car and forced Hall to drive to Kiritsis’ Crestwood Village apartment. He told police the apartment was rigged with explosives, chained Hall in the bathroom, and held him captive for nearly 63 hours.

Kiritsis had purchased a 17-acre westside property in hopes of developing a shopping center. His $130,000 mortgage with Meridian Mortgage was due on March 1, 1977, and he accused the company of having deliberately sabotaged his project. For Hall’s release, Kiritsis demanded an apology and $5 million compensation from Meridian Mortgage, as well as a promise of no state, federal, or civil prosecution. 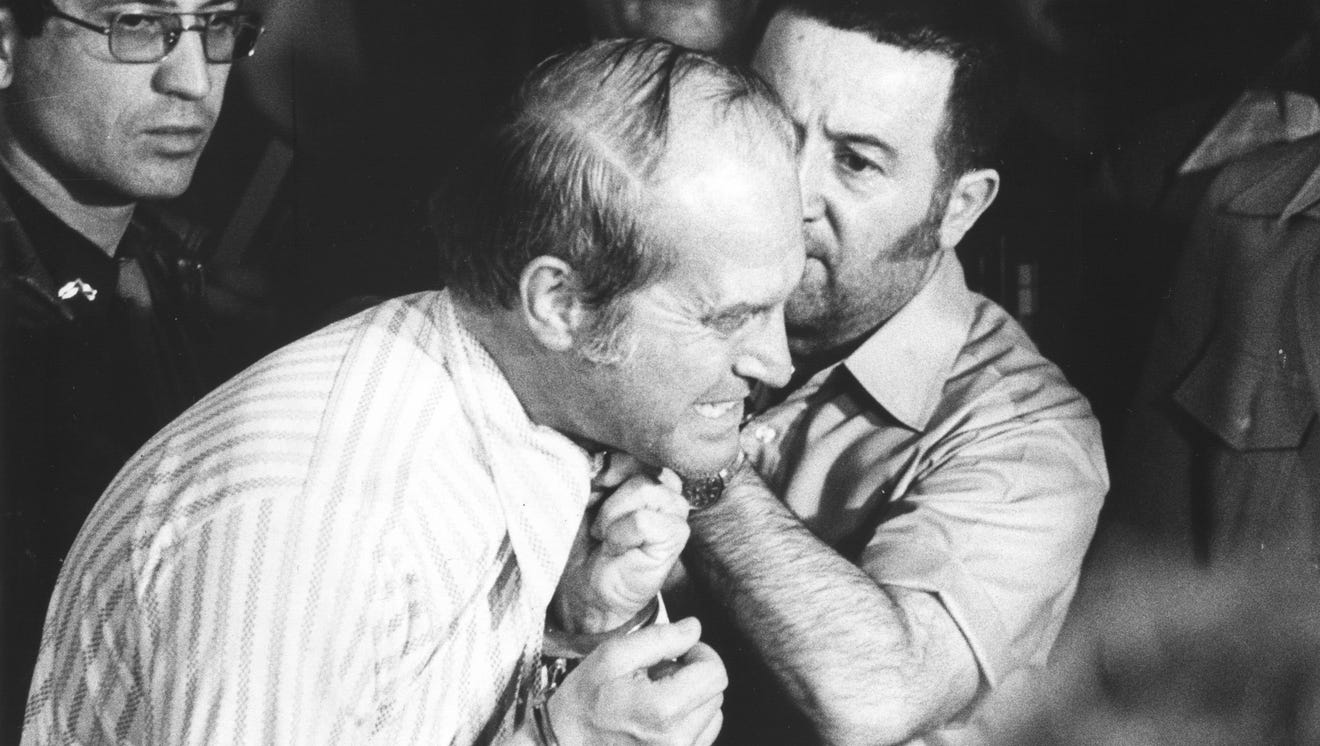 The sensational event drew national news outlets to Indianapolis to cover the potential murder-suicide. Listening to the coverage, Kiritsis was upset about the inaccuracy of the reporting. He reached out to Fred Heckman at Wibc, who at the time was called the most trusted newsman in Indianapolis, to tell his side of the story.

In an effort to diffuse the situation, Heckman searched for, recognized, and exposed the humanity of the entire situation. In a taped conversation, Kiritsis bared his feelings to Heckman. To demonstrate his sincerity to help, Heckman broadcast the recording, which enabled him to fully gain Kiritsis’ trust. Teaming with the FBI and other law enforcement agencies, Heckman remained on-air to negotiate the safe release of the hostage. 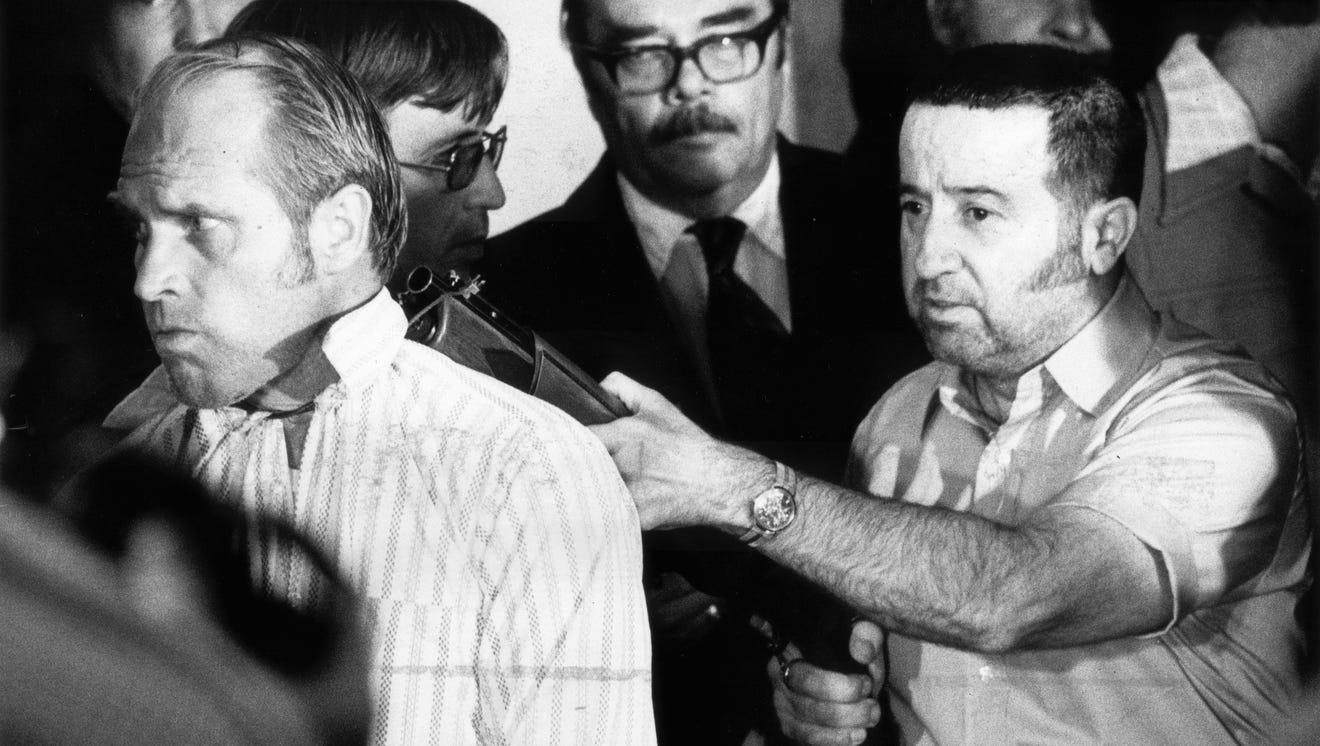 On February 10, when assured his demands had been met, Kiritsis led Hall at gunpoint to the building’s lobby where he delivered an obscenity-filled, 23-minute monologue, carried live during prime time by all Indianapolis television stations. Afterward, he released Hall and was immediately taken into police custody.

Eight months later, Kiritsis was tried on charges of kidnapping, armed robbery, and armed extortion. On October 21, 1977, he was found not guilty by reason of insanity and two weeks later was declared incompetent and turned over to the State Department of Mental Health for commitment to an institution. In December, Kiritsis was found in contempt of court for refusing to submit to a psychiatric examination.

From November 1977 to June 1981, Kiritsis was held in various state hospitals. He was then sent to the infirmary of the Indiana State Reformatory on another contempt citation for refusing to be examined; January 1, 1985, was the deadline set for compliance with the court order. Following a new court order that he submit to a medical examination with or without his consent, the Indiana Supreme Court ruled in January 1985 that Kiritsis could not be forced to undergo such examinations against his will. Following two more years of detention in state hospitals, in 1987 he agreed to see a psychiatrist outside the state system.

Released in January 1988, after spending 11 years in state custody, Kiritsis continued to live in Indianapolis in the early 1990s. He was released when the state could not prove he was a danger to society or mentally ill. He returned briefly to the public eye in 1990 when he filed 101 lawsuits in Marion County Superior Court against virtually everyone who had been involved in his case since 1977.

On January 28, 2005, Kiritsis died in his home from natural causes. In 2017, Richard “Dick” Hall published a book, Kiritsis And Me, about his experience during the 68 hours with Kiritsis.

Apple Podcasts featured actor Jon Hamm as Fred Heckman in an 8-episode podcast chronicling the life-or-death hostage crisis released on February 22, 2022. The podcast brought renewed attention to the case but included some misperceptions. It suggested that Hall and his father indeed somehow cheated Kiritsis. This is not true. The Halls followed all business rules and regulations in their dealings with him. The final episode of the series depicts a scene in which Kiritsis called Heckman from the courthouse telling him that he was a “free man,” which implies that he was freed immediately after the jury found him not guilty by the reason of insanity.

A few months after the podcast was released, on May 20, 2022, Richard Hall died following a brief illness.