The concept for the Indianapolis Zoo first emerged in the 1940s when newspaper columnist Lowell Nussbaum began voicing his dream of establishing a zoo in Indianapolis. Through his column “Inside Indianapolis,” which first appeared in the Indianapolis Times and then in the Indianapolis Star, Nussbaum campaigned for a zoo, spurring community leaders into action. By 1944, he and other founders had begun discussing potential sites for the facility. Their ideal Zoo would be supported by admission, in-park sales, contributions, and memberships, which remains true today. 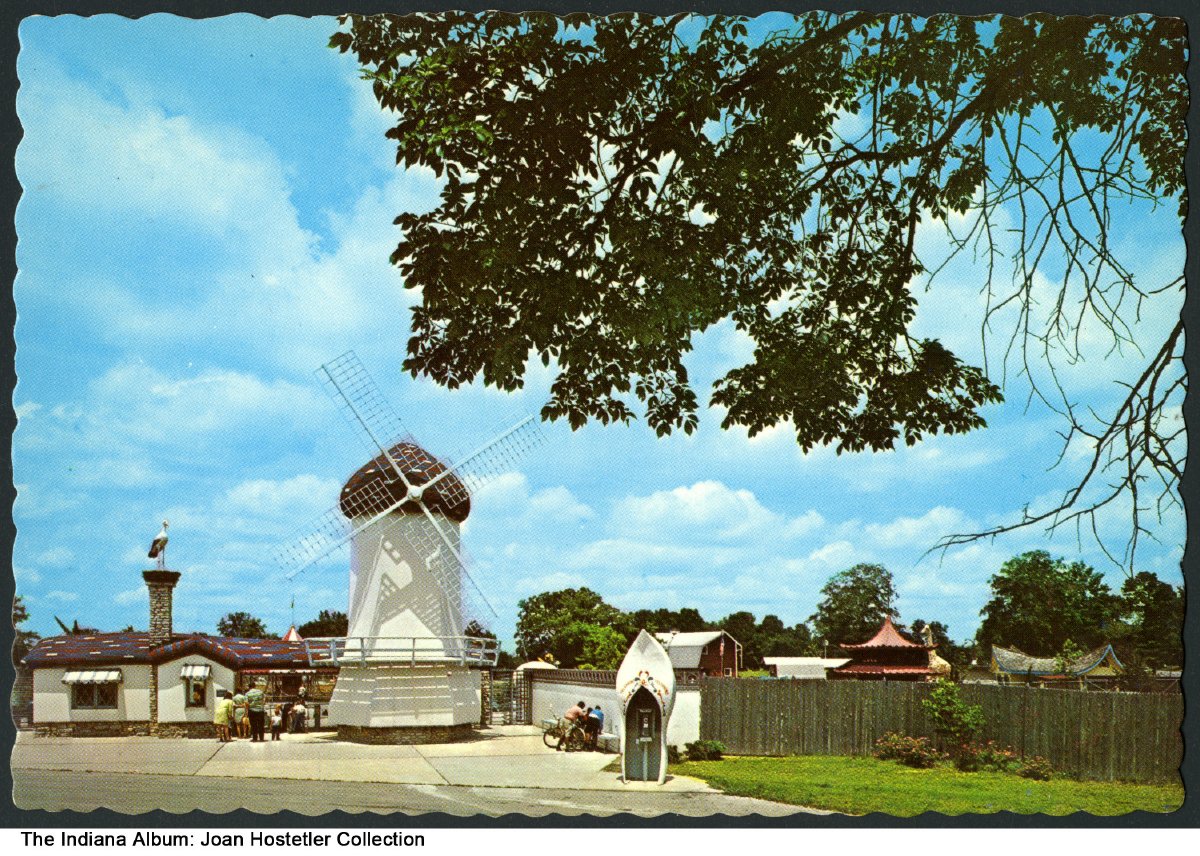 Momentum for the Zoo slowed during World War II, but Nussbaum and the other founders persevered by collecting animals, planning exhibits, and finalizing the location for George Washington Park. Construction began Aug. 6, 1962, and the first Zoo opened at its original East 30th Street location on April 18, 1964. After following his dreams through to reality, Nussbaum later became known as “the father of the Indianapolis Zoo.” ​ ​

The original Indianapolis Zoo was called the Washington Park Children’s Zoo and exhibited an Asian elephant, penguins, camels, tortoises, buffalos, and more. Visitors especially loved the Dutch windmill at the entrance as well as giant replicas of a giraffe and a blue whale, which were icons of the old Zoo. In its inaugural year, the Zoo welcomed 270,000 visitors. 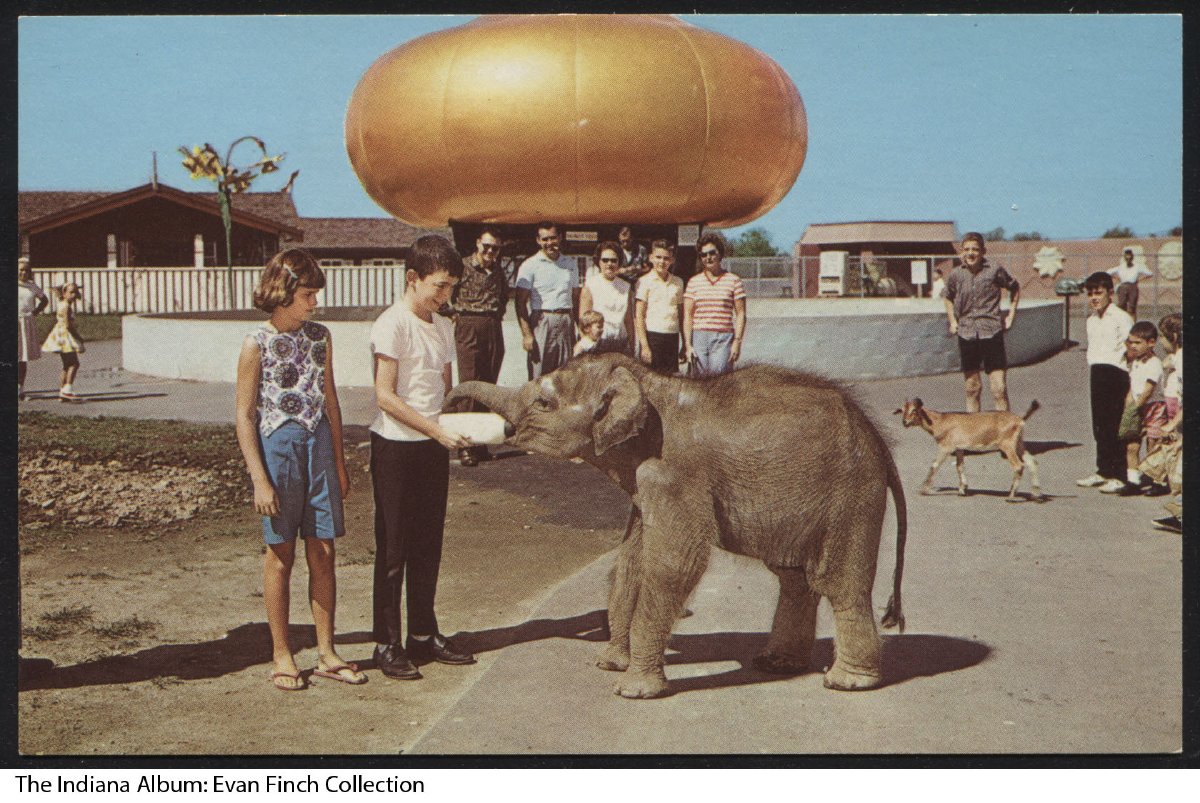 Postcard of children and an elephant at the Indianapolis Zoo, ca. 1965
Credit: The Indiana Album: Evan Finch Collection
View Source

Over the next 22 years, the Indianapolis Zoo encountered many additions and changes partly through donations of personal “pets” such as monkeys, large cats, zebras, wallabies, and alligators, among other species; the collection had doubled in size by the Zoo’s 20th anniversary. Having outgrown the original idea of a children’s zoo, the Indianapolis Zoo needed a bigger site. ​

A vision for a new, world-class zoo began to emerge in 1982. In addition to having more space, zoo officials wanted the new location to be in a more visible and accessible site in the heart of Indianapolis to attract more visitors. They found the ideal location in the newly incorporated White River State Park. The zoo’s founders also knew it would be important to preserve natural habitats, showcase diversity in species, and observe natural behaviors to help save endangered species in the wild. Central to this plan was the concept of a cageless zoo, one with exhibits that simulated the animals’ natural environments. Since the inception of the Indianapolis Zoo in 1964, the institutions had become more than just a place to see animals; they were reconceptualized as centers of animal conservation and education.

The new facility broke ground in September 1985. During 1987, the zoo management staff had the unique challenge of operating and closing down the original zoo while overseeing the preparation of the new facility. The Washington Park Zoo closed on November 1, 1987, as a part of the transfer to the new facility in White River State Park. In late November and early December 1987, the actual move of the zoo’s 500 animals took place. The new Indianapolis Zoo was the first attraction to open in White River State Park on June 11, 1988.

By 1991, the Indianapolis Zoo had evolved from a mid-sized zoo in a city park to a major metropolitan zoo with “state of the art” facilities. Its design was based on the bioclimatic concept—grouping animals found in particular environments (“biomes”) such as deserts, plains, forests, and waters. The Marine Mammals Pavilion featuring whales and dolphins was the largest totally enclosed, environmentally controlled structure of its kind in the nation when it opened in February 1989, and July 1990, marked the opening of the “Deserts of the World” exhibit. Other new exhibit areas were planned on a periodic basis. With the arrival of new animals, the new Zoo grew to five times its former size. The new Zoo included five areas showcasing: waterways; deserts; plains; forests; and Flights of Fancy, featuring birds from warmer climates around the world.

In 1997, the Indianapolis Zoological Society undertook the development of White River Gardens. Groundbreaking for the botanical gardens took place in October 1997 and opened in summer 1999. The Zoo and Gardens share the same main entrance. The Gardens, however, were initially maintained as a separate attraction until 2006, when it was included as part of the Indianapolis Zoo. White River Gardens exhibits more than 16,000 plants, including both native and exotic species. Many of them are rare or historic in value. The Gardens also include a glass-enclosed conservatory, outdoor design gardens, water garden, numerous artistic fountains and features, a wedding garden for ceremonies and receptions, 1.5 miles of winding paths and walkways, and an indoor/outdoor dining facility with a dramatic view of the downtown skyline and riverfront. The Zoo opened the world-renowned exhibit, the Simon Skjodt International Orangutan Center in 2014. As a hub for research of cognitive abilities for great apes, this award-winning facility has been called one of the most significant zoo exhibits in the world. Designed to stimulate the apes’ physical, social, and intellectual abilities, it is home to 11 orangutans, one of the largest groups of orangutans in any American zoo. Serving as a vital education, research, and conservation center aimed at ensuring a positive future for critically endangered orangutans in the wild, the Orangutan Center brings new hope to a species on the verge of extinction.

Philanthropy and the Arts

Indianapolis has struggled with the issue of downtown development (...Read More »