Leonard was a well-known and much-beloved basketball and Indiana Pacers icon. The 6-foot-3-inch Leonard developed into a natural on the basketball court and went from playing on his high school team to playing for the Indiana University basketball team as a guard. His claim to fame came when he sank the winning free throw of the 1953 NCAA championship game against Kansas with just seconds on the clock. He became a third-team All-American in 1953, a second-team All-American in 1954, and appeared on Indiana University’s all-century team.

At Indiana University Leonard met his soon-to-be wife Nancy Root. The pair married the day after they graduated and went on to have five children together.

Leonard joined the Lakers in 1956 where he played five seasons. During this time, he gained his nickname, “Slick,” after a particularly successful game of gin rummy with Lakers teammate George Mikan.

From 1961-1962 Leonard played for the Chicago Packers, the team’s inaugural season in the NBA. The next season, when the Packers became the Zephyrs, the team hired him as a player/coach. The next year the team moved to Baltimore, changed its name to the Bullets, and hired Leonard as the full-time coach for its first year in Baltimore.

Nancy and Bobby Leonard react at the end of the Save the Pacers Telethon, July 1977
Credit: IndyStar
View Source

Leonard began his 50-year career with the Indiana Pacers in 1968. He served as the Pacers’ coach for 12 seasons, retiring in 1980. During that time, he led the team to 3 American Basketball Association (ABA) championships: 1970, 1972, 1973. He and his wife kept the team going through the nearly debilitating financial burdens of the ABA-NBA merger in June 1976. With other Pacers’ personnel, the couple organized a last-minute telethon on Indianapolis station Wttv (Channel 4) that raised the needed funds to keep the franchise afloat.

In 1985, Leonard progressed from coaching to a new career as television and radio color commentator (an expert sports commentator) for the Pacers. During his 35 years as commentator his trademark exclamation “Boom, baby!” was born. He first used the phrase while coaching the Pacers in the seventh game of the semi-finals of the 1975 ABA playoffs. He continued using the expression as a commentator, exclaiming “Boom Baby” every time a Pacers player hit a three-point shot. 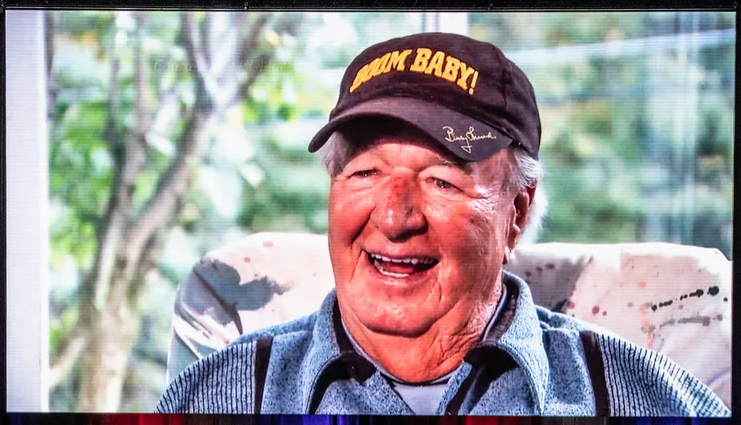