In 1921, following service in World War I, regiments of the Indiana National Guard began to organize again throughout the state. For the first time in Indiana, the 38th Division organized its headquarters in Indianapolis in 1923. During the war, portions of the Indiana National Guard had been called to Camp Shelby, in Mississippi, where they were organized as the 38th Division before being deployed to France.

When it was reestablished in Indianapolis in 1923, the 38th Division headquarters occupied rental space in the Chalfant Building on the northwest corner of Michigan and Pennsylvania Streets. It became clear that a new headquarters was needed to serve the 38th and its immediate supporting units as a permanent armory suited for military use.

Maj. Gen. Robert H. Tyndall, the division commander, and Col. Robert L. Moorhead, a member of the Indiana State Armory Board (which would build the armory), were instrumental in getting the new armory approved. Out of 21 proposed sites, the one at 711 North Pennsylvania Street was chosen. General Tyndall was also the American Legion‘s national treasurer, and Colonel Moorhead was instrumental in getting Indianapolis selected as the permanent site of the legion’s national headquarters. Because of Tyndall and Moorhead’s dual positions, it was no accident that the armory site was chosen just across the street to the east from the developing Indiana World War Memoria Plaza and the Legion’s new home. 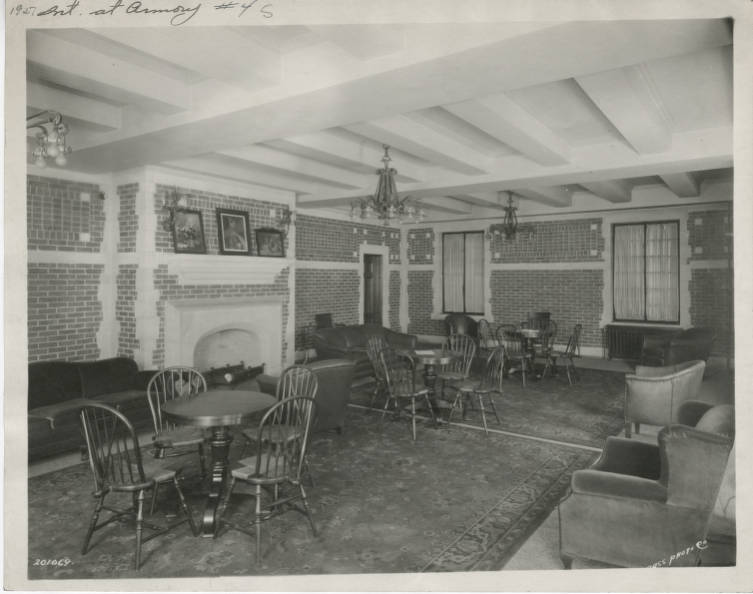 The July 1920 act of the Indiana General Assembly that had authorized the construction of the memorial put in place stipulations that limited “the kind, character, and height of buildings located or erected thereafter, within three hundred (300) feet” of the boundaries of the plaza. The design of the four-story façade of the armory, therefore, was in the Italian Renaissance style, with arched windows and rusticated blocks and faced with limestone, just like the material to be used for the plaza.

The armory was built by the state for $425,000. Construction began in September 1925, was completed late in the summer of 1926, and the building has been in constant use since. During the 1930s, and through the 1970s, it was frequently called the North Side Armory, with two other armories on the southside of the city. In 1967, it was formally named the Tyndall Armory in honor of General Tyndall.

Although Stout Field serves as headquarters to the Indiana National Guard’s major command units, the Tyndall Armory continues to be the home to several National Guard divisions, and it is also used for boxing matches and as an entertainment venue.

Tyndall Armory The armory is located at 711 North Pennsylvania Street.

The Indiana National Guard traces its beginnings to 1801 when ...Read More »