The circular street in the center of Mile Square is one of the city’s shortest yet most famous thoroughfares. Planned as the Baroque focal point of the original city plan, the circular street stands in sharp contrast to the standard grid of the Mile Square plan. It is further emphasized by the four angular streets radiating from but not meeting at the Circle.

The 1821 Plat of the Town of Indianapolis identifies the circular street as Circle Street. It framed the intended site of the Governor’s House. The four blocks framing the Circle were called the Governor’s Square. A temporary market building was soon constructed in the center of the Circle facing south amid the many trees.

The governor’s residence, depicted in the sketches of local artist Christian Schrader, was added in 1827, although no governor ever resided there. Instead, the brick house served a variety of uses—including state library, state bank, and ballroom—before its demolition in 1857. The early character of the Circle was residential, with houses interspersed among four churches constructed between 1829 and 1843: in chronological order, Wesley Chapel (Methodist), Second Presbyterian Church, First Presbyterian Church, and Christ Episcopal Church. A fifth church, Plymouth Congregational, did not face the Circle but was immediately north, opposite Christ Church, which is the only surviving church on the Circle. After the demolition of the Governor’s House, the Circle deteriorated into a livestock grazing area and rubbish dump.

Following the Civil War, the site was improved and renamed Circle Park. As the city and its central business district grew, the character of the Circle began to change from religious and residential to commercial. Hotels, office buildings, and stores began to front the right-of-way of Circle Park with arched facades, in sharp contrast to the front lawns of the buildings belonging to the previous period.

The erection of the Soldiers And Sailors Monument between 1888 and 1901 changed the Circle from an open, forested park to a setting for a towering Neo-Baroque obelisk ornamented with fountains, gardens, and statuary. The monument’s design carried the motto, “The symbol of Indianapolis,” and the structure became just that. The monument, physically defined by the Circle, in turn shaped the development of the Circle. After its construction, the street name was changed from Circle Street to Monument Place and later to Monument Circle.

In 1905, the City Council enacted a pioneering urban design ordinance to preserve the skyline of the Circle. The ordinance limited the height of all buildings fronting the Circle to 86 feet, at the time the height of the Columbia Club Building. After World War I, commercial interests pushed for the allowance of greater building heights. The city hired the respected urban planner and landscape architect, George E. Kessler as a consultant, and in 1922 a new ordinance capped the height at 108 feet with an extra 42 feet permitted by using a setback from the façade line.

The uniqueness of the Circle inspired local architect William Earl Russ in 1921 to advocate not only the height restrictions, but also uniform height, style, and materials for buildings to be constructed facing the Circle as found in European cities. Russ’ ideas apparently helped to shape the appearance of both the Guaranty and Test buildings and the lost Continental Bank building.

The 1920s saw Monument Circle reshaped as those office buildings and the present Columbia Club replaced the smaller 19th-century structures. In that decade four major office buildings were constructed, ending with the completion of the Art Deco Circle Tower. No new additions were made for the next two decades because of the Great Depression and World War II. Two major buildings, the J. C. Penney and Fidelity Trust buildings, appeared in the 1950s in the severe Modern style.

The 1970s brought the bricking of the Circle pavement as a symbol of urban revitalization. In the 1980s, the Circle Theatre was renovated, as was the Penney building (Associated Group, then Anthem Blue Cross Blue Shield headquarters) in 1982 and again in 1990-1991 to its present appearance with granite facing. The name of the building again changed to simply 120 MONUMENT CIRCLE after Anthem moved out, leaving the office portion of the building vacant. 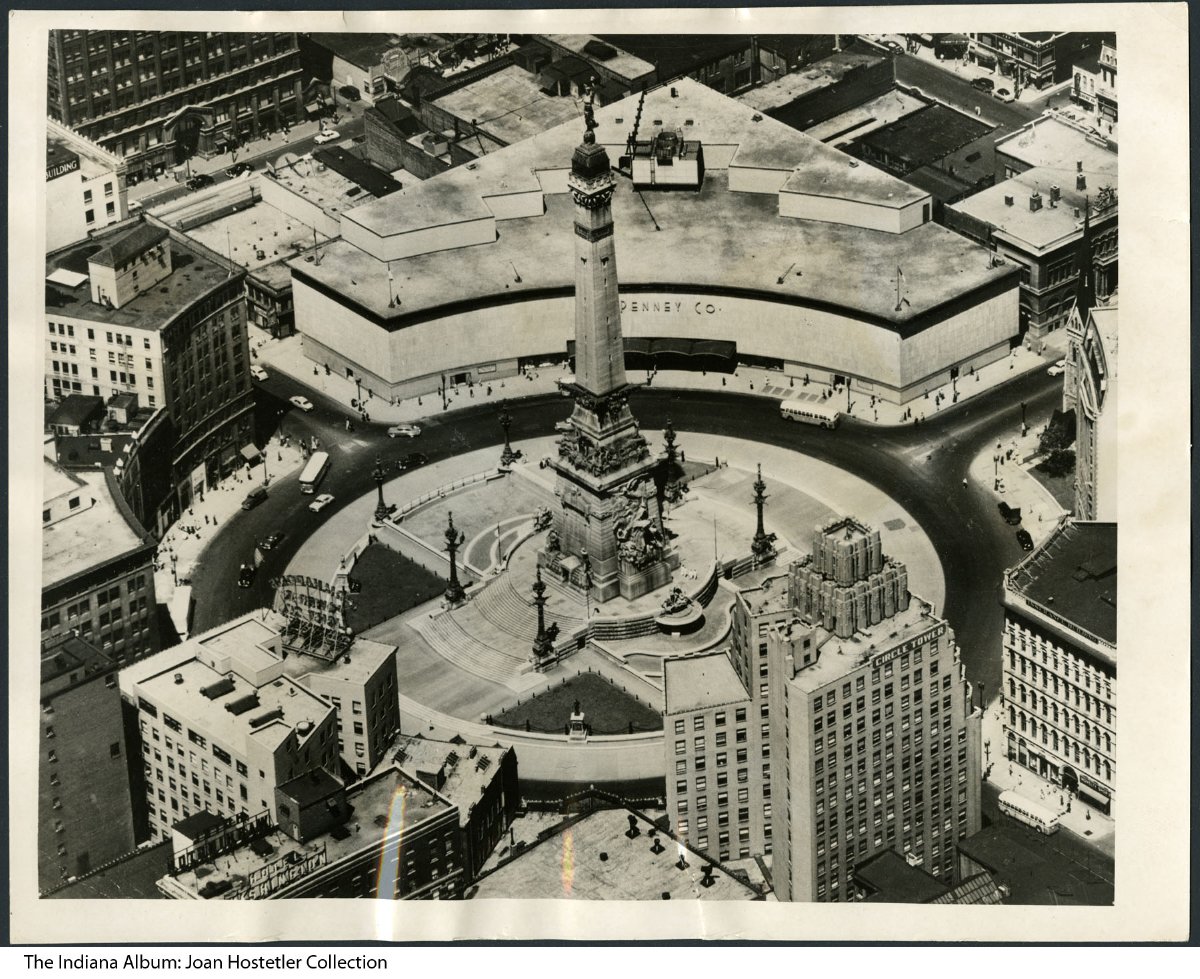 Also in the 1990s, construction began on the Circle Centre Mall. The mall’s main entrance was to be on Monument Circle, hence the mall’s name, but that was not to be. Instead of the mall entrance, the space was eventually filled by the Emmis Communications Building in 1998, the façade of which integrates the ornate limestone façade of the 1897 Journal Building. The Journal Building was demolished in 1989 but the façade was saved in place to be integrated into the mall entrance. The Indianapolis Journal was an important daily newspaper from 1825 to 1904.

The Circle has been the scene of numerous public celebrations, parades, rallies, and ceremonies. Independence Day celebrations were staged here in the 19th century. The Circle and Washington Street comprised a set parade route in the 19th and into the 20th centuries. Monument Circle was reincorporated into the route of the annual 500 Festival Parade after its restoration. In November 2019, the Indiana World War Memorial Commission unveiled a patriotic light show on Monument Circle funded through a Lilly Endowment, Inc. Indianapolis through Arts and Culture Innovation grant.

Monument Circle The Circle is situated at the city center, located within the Mile Square in downtown Indianapolis.

William H. Hudnut III was not only the longest-serving ...Read More »

In December 1981, the Indianapolis Project was formed as a ...Read More »

In one of the earliest documented labor struggles in ...Read More »

The concept for the Indianapolis Zoo first emerged in ...Read More »