Site of the Indianapolis 500

The track for the Indianapolis Motor Speedway was the concept of flamboyant entrepreneur Carl Graham Fisher, born in Greensburg, Indiana, who in 1902 established himself in Indianapolis as a pioneer in the business of selling automobiles. By 1905, the many local automobile manufacturers were finding the rutty, virtually undeveloped public roads no longer adequate for testing an automobile’s performance, and even the brand-new, one-mile oval dirt track at the Indiana State Fairgrounds was becoming outmoded for speed runs. Fisher proposed a much larger, sprawling track for both private testing and occasionally races in which manufacturers would compete against each other. He believed that success on the track would translate into showroom sales. Three years after the failure of his ambitious plan to build a five-mile track at French Lick, Indiana, in 1906, Fisher formed the Indianapolis Motor Speedway Company (later Corporation) and in 1909 opened a 2 1/2-mile, rectangular-shaped track laid out on farmland about five miles northwest of Indianapolis. His three partners were Arthur Newby (of the prominent National Motor Vehicle Company on East 22nd Street), Frank Wheeler (of Wheeler-Schebler Carburetor Company), and James A. Allison, Fisher’s partner in the successful Prest-O-Lite Company.

The track’s inaugural motorcycle and automobile races in August 1909 were consistently hampered by accidents caused by the original surface of crushed rock and tar. In September, the company resurfaced the entire speedway in an amazing 63 days with 3.2 million, 10-pound paving bricks, Culver Blocks, which were the paving brick of choice for streets in the early 20th century. In 1901, Reuben D. Culver, of the Wabash Clay Company located in Veedersburg, Indiana, had received a patent for his bricks. The Speedway Corporation contracted with his company to produce the bricks for the Speedway track. One hundred men worked 12-hour shifts producing 60,000 bricks per day to meet contract deadlines.

The front row of the 1911 starting lineup–Johnny Aitken in the #4 National, Harry Endicott in the #3 Inter-State, Ralph DePalma in the #2 Simplex, Lewis Strang in the #1 Case, and pacemaker Carl Fisher in his Stoddard-Dayton.
Credit: Indianapolis Motor Speedway via Indiana State Library
View Source

Changes also occurred in the track’s racing program. Poor attendance at a trio of multiple-day meets in 1910 led management to present a one-day “extravaganza” for 1911, paying a huge purse. Thus, the Indianapolis 500-Mile Race was born.

In 1913, the first IMS Pagoda was built at the start-finish line to provide a place to oversee the entire track during the 500. As speeds at the 500 increased, Fisher and Allison believed that the original structure was too close to the track and razed the building following the 1925 race. They built a second Pagoda in 1926, which was slightly larger and set back from the main straightaway. The 1926 Pagoda and its successors went on to become landmarks on IMS property.

In 1927, Fisher and Allison sold the track to a Michigan group headed up by World War I flying ace Eddie Rickenbacker, formerly a racing driver who had competed in most of the pre-World War I 500s. Although Rickenbacker carried out many notable renovations and improvements during his tenure, the track deteriorated dreadfully during four years of total inactivity during World War II. Three-time race winner Wilbur Shaw virtually rescued the track by arranging for Terre Haute businessman Anton (Tony) Hulman Jr. to purchase it from Rickenbacker’s group in November 1945.

Hulman and his colleagues immediately embarked upon an ambitious six-month renovation program to get the facility ready for a 1946 race. Patches of asphalt had begun to be applied to the turns in the spring of 1936, and by the time the track was closed for World War II all but the greater portion of the main straight was of Kentucky rock asphalt. The remaining bricks were retained as long as feasible for reasons of nostalgia. The old wooden grandstands began to be replaced when a huge double-deck-stand of steel was erected outside of turn one in 1949, soon to be followed by several more, similar in appearance, to its north. Until 1956 all-year-round Speedway business had been conducted in offices on North Capitol Avenue near downtown Indianapolis rather than at the track itself. That spring, however, a combination office building and museum opened on the track grounds at the corner of West 16th Street and Georgetown Road (See Indianapolis Motor Speedway Hall Of Fame Museum). In 1957, the second Pagoda was replaced with a new Master Race Control Tower. Construction at the Speedway that year also included a tower terrace and pit area.

Following the 1961 race, all but three feet of brick at the start/finish line were covered over with asphalt. An 18-hole golf course, originally installed in 1929 with nine holes on the infield and nine outside of the backstretch, was expanded to 27 holes in 1965 during the period when the track was hosting the PGA-sanctioned 500 Open. The 1973 Indianapolis 500—the most deadly in its history (2 drivers died and 11 spectators were injured)—prompted major changes at the Speedway to upgrade the track and make other safety improvements. The angled inside wall located at the northwest corner of the track, which had led to a previous fatality in 1964, was removed; the pit entrance was widened; retaining walls and catch fences were improved; and a flag stand for the race starter was built over the start-finish line. Spectator seating close to the track was removed. VIP suites also were built as an experiment on the outside of turn two in 1973 and were so well received by corporations that many more were added later on either side of the main straight at the north end.

In spring 1976, a separate building was constructed for the museum, which is located on the inside of the track between turns one and two. The garage area (“Gasoline Alley”), which has taken several different forms since 1915, was completely torn down and rebuilt as a modern complex in time for the 1986 race.

Internationally renowned designer Pete Dye, an Indianapolis native, completely revamped the Speedway golf course between 1991 and 1993. Now designated Brickyard Crossing, the 18-hole course has hosted both PGA Seniors and the LPGA. The 1956 building, used for years as a security headquarters and later as a credentials office, was razed in July 1993, to make way for a new three-story office.

After years of speculation and anticipation, track management announced in the spring of 1993 that a NASCAR stock car race, the Brickyard 400, would be held on August 6, 1994, finally ending the one-race-per-year policy that had been in effect since the Harvest Day Classic drew a disappointing crowd in September 1916. An infield road course, which would have hooked up with the rectangular-shaped oval, had been in the original design in 1909, but because of various trials and tribulations with constructing the oval, the road course was never built. Then in 1998, almost 90 years later, track management announced that an arrangement had been made to host an international Formula One Grand Prix on a soon-to-be-built road course that was not too dissimilar from the 1909 concept in that it would wind through the infield and use a portion of the oval.

Readying for the inaugural United States Grand Prix that took place in September 2000 involved a massive construction project—the most ambitious in IMS history. In addition to constructing the road course, modifications had to be made to pits and pit lanes. Formula One required pit-side garages and a pit-side media center. To meet these Formula-One rules, a new Pagoda replaced the 1957 Control Tower.

The Pagoda has 10 levels. It includes state-of-the-art facilities for race control, timing and scoring, and radio broadcast booths. The Pagoda Plaza was constructed behind the Pagoda. The famous “Yard of Bricks” was extended from the start/finish line underneath the Pagoda tower and into the middle of the plaza. Two large video screens were installed on the plaza so that spectators could see action on the track.

IMS held the United States Grand Prix between 2000 and 2007 with the great German driver Michael Schumacher winning five of the eight events for the Ferrari organization. The road course was then slightly revised for 2008 to accommodate an international Moto GP motorcycle race which was held through 2015. 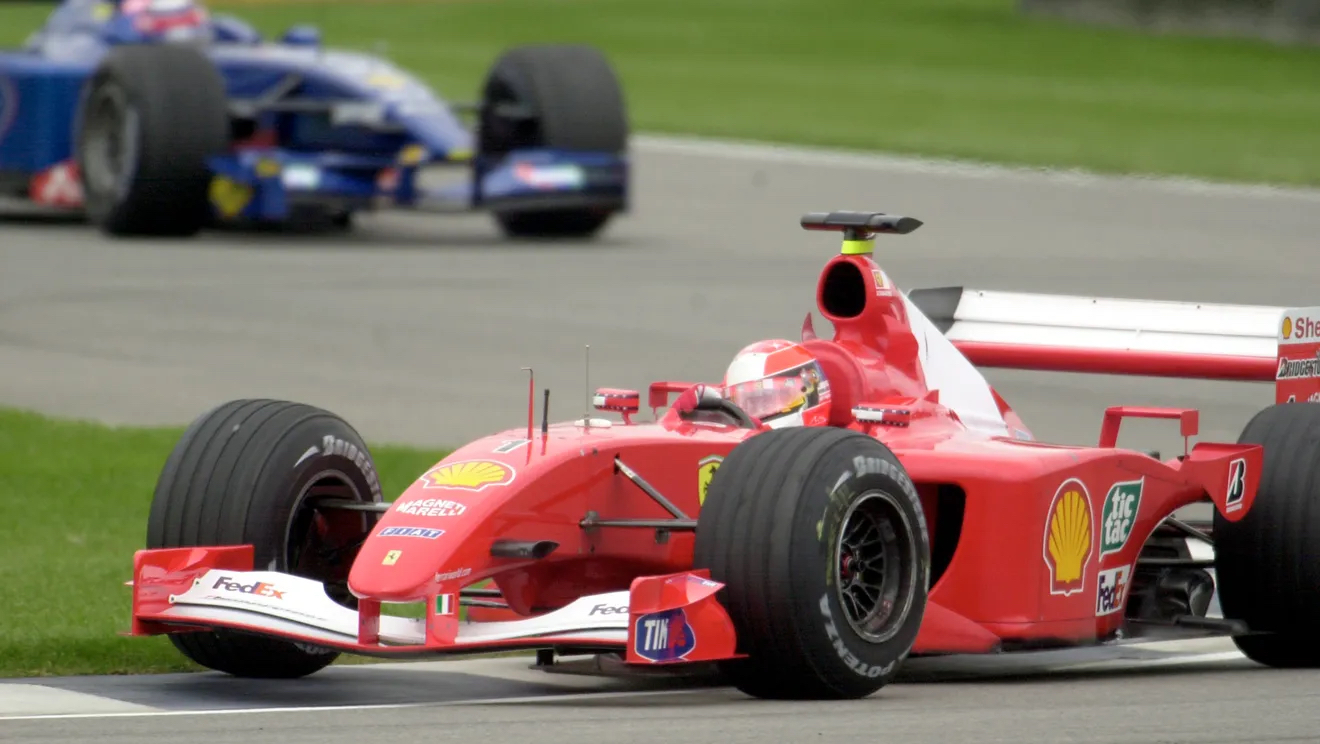 Michael Schumacher in his Formula One Ferrari during practice at the Indianapolis Motor Speedway, 2001
Credit: Matt Kryger, IndyStar
View Source

A variety of other events have been held on both the oval and the road course in the meantime, and in 2018, a quarter-mile oval dirt track was built near the inside of turn three to host occasional midget car racing events. In 2019, the economic impact of the Indianapolis 500 on Central Indiana was estimated at 100s of millions of dollars annually. After almost 75 years, the Hulman-George family sold the track to the phenomenally successful businessman and 18-time, 500-winning-car entrant Roger Penske. He formed a brand-new entity, Penske Entertainment a subsidiary of Penske Corporation, as IMS owner. Penske’s acquisition of the Speedway was completed in January 2020.

Methodist Hospital began as a ministry of the Methodist ...Read More »

The National Automobile and Electric Company was founded in ...Read More »