Founded in 1950, Indianapolis Baptist Temple had humble beginnings on the south side of the city. The congregation remained relatively small until 1955 when the Rev. Gregory J. Dixon became the pastor. From 1955 until about 1976, Baptist Temple grew by a reported 300 members per year. After 1976, membership stabilized until the late 1980s when it began a slight decline.

At its largest size in the 1970s, Indianapolis Baptist Temple claimed more than 8,000 members. Baptist Temple has been an active congregation with a wide variety of ministries, including a school for kindergarten through grade 12 founded in 1971, day care for preschoolers, a college founded in 1979, and a wide-ranging bus ministry. At one time the church owned a nursing home, but it was forced to declare bankruptcy.

Under the ministry of Dixon, Baptist Temple emphasized traditional Baptist tenets of separation of church and state and freedom of conscience. Dixon was at one time the national secretary and Indiana chairman of the Moral Majority, a fundamentalist, evangelical religious and political organization under the leadership of the Rev. Jerry Falwell of Virginia. Dixon left that group in 1983 to found and head a new organization called the American Coalition of Unregistered Churches. The organization opposes any sort of government regulation and interference in church concerns.

After 40 years in the pulpit, Dixon retired in 1996, turning the leadership of the Indianapolis Baptist Temple over to his son, the Reverend Gregory A. Dixon. At this time, the federal government increasingly scrutinized the congregation for its failure to pay taxes on behalf of its staff. The church contended that each staff member was expected to pay their own taxes. As the crisis grew, the elder Dixon returned to Indianapolis. 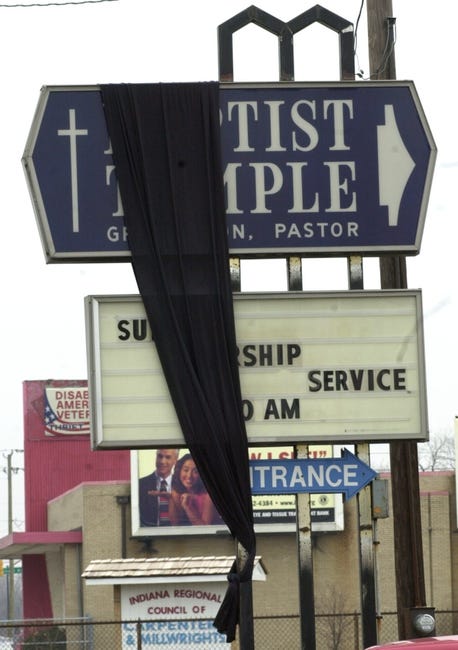 In 1999, U.S. District Court Judge Sarah Evans Barker ruled the church owed $6 million in back social security and employment taxes to the federal government. After the Seventh Circuit U.S. Court of Appeals upheld the district court’s decision, the Indianapolis Baptist Temple was ordered to hand over their church to the government. Starting in November 2000, and for the next three months, members of the congregation literally held their ground, sequestering themselves inside the building. Finally in February 2001, federal officials seized control of the property peacefully, as the elder Dixon helped to defuse the situation, insisting its members and supporters remain non-violent and agreeing to exit the church peacefully. Dixon and seven others were placed on stretchers and carried out of the building.

Between 2001 and 2006, Indianapolis Baptist Temple Church rented various venues before taking over a former sports facility on Southport Road. After completing $1.3 million in renovations, the congregation held its first services in the building on August 27, 2006, with nearly 1,000 people in attendance. Greg A. Dixon left the pastorate of the church at the end of 2015.