The Indianapolis Ten Point Coalition (ITPC) is a clergy-led effort to bring together the faith-based community, community leaders, businesses, law enforcement, and the court system to address critical community issues such as violence, chronic unemployment, and the lack of education. Its principal activities have been efforts to open better communication between police and local communities—especially African American communities—to lower the rate of violent crime and homicide. 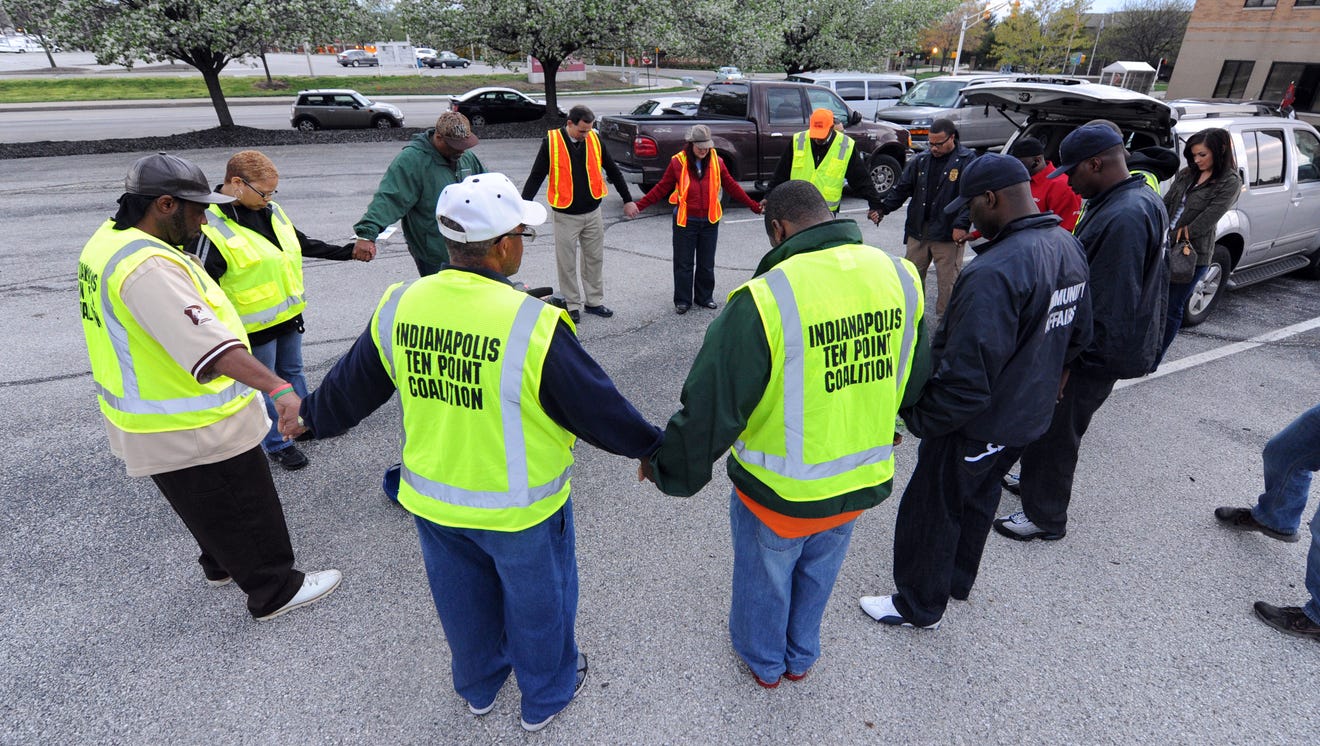 Volunteers from the Indianapolis Ten Point Coalition, area clergy, and members of the Indianapolis Metropolitan Police Community Affairs Division, gathered together for a short prayer, before dividing up to walk in Downtown Indianapolis in 2012.
Credit: Matt Kryger, IndyStar
View Source

The Indianapolis Ten Point Coalition is a branch of the National Ten Point Coalition that Eugene Rivers and Jeffrey Brown organized in Boston in 1992. The idea of “ten-point” is a callback to the Ten Point Program that Huey Newton and Bobby Seale originally started within the Black Panther Party in 1966. The Ten Point Coalition movement was a more mainstream effort to bridge the goals of activists in the 1960s with the political realities of the 1990s. Many such efforts arose in 1992 in the wake of the Rodney King riots that began in Los Angeles and spread across the United States that same year.

In 1998, Eugene Rivers, chair of the national foundation, came to Indianapolis and introduced the concept to local clergy. The Indianapolis Ten Point Coalition (ITPC) was founded in 1999, with Charles Harrison and Clarence Moore in leadership roles. The ITPC determined to focus on three of the coalition’s 10 goals: Direct engagement with high-risk youth who are associated with violence; chronic unemployment; and education. ITPC’s most visible efforts have been in the area of youth violence as they have tried to build bridges among communities, police officers, and juvenile courts.

The efforts of the Indianapolis Ten Point Coalition have received mixed reviews from the city’s African American community. Many appreciate efforts to reduce violent crime and help young people. In 2018 three Indianapolis neighborhoods with ITPC patrols experienced a significant reduction in homicides. The highland-brookside neighborhood celebrated  2 years without a murder while Butler-Tarkington and Crown Hill went 1,000 days without a youth homicide. Others believe the ITPC has been too closely aligned with the police and city government in brokering deals that are inherently fraught with racial, economic, and political tension.