The Indiana Temple, located in Carmel, was the first Mormon Temple built in the state. Different from church meetinghouses, which are used for weekly worship services, temples are reserved for special ordinances for Latter-day Saints and their deceased ancestors. Other Temples in the Midwest include Chicago; Louisville, Kentucky; and Columbus, Ohio. 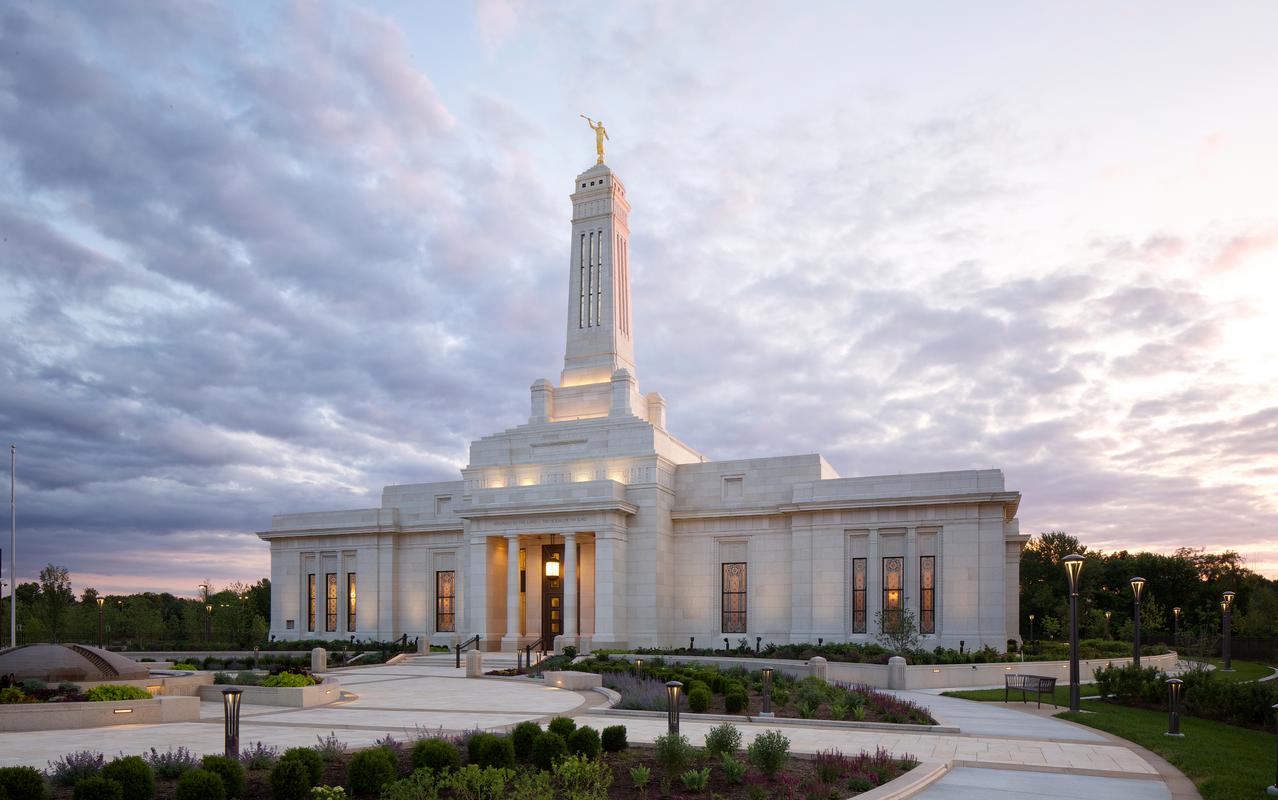 In March 2011, four representatives of the Church of Latter-day Saints met with the City of Carmel to discuss plans for an Indianapolis Temple on a 48-acre plot of land at Spring Mill Road and 116th Street. The location was chosen because of its accessibility to U.S. 31 and its interchange with I-465.

A groundbreaking and dedication ceremony took place on September 29, 2012. Elder Donald L. Hallstrom, president of the Quorum of the Seventy (the governing body of the church), led the ceremony. The 34,000-square-foot structure took three years to construct. Dedicated on August 25, 2015, the Indianapolis Temple is the 148th Mormon temple in operation. 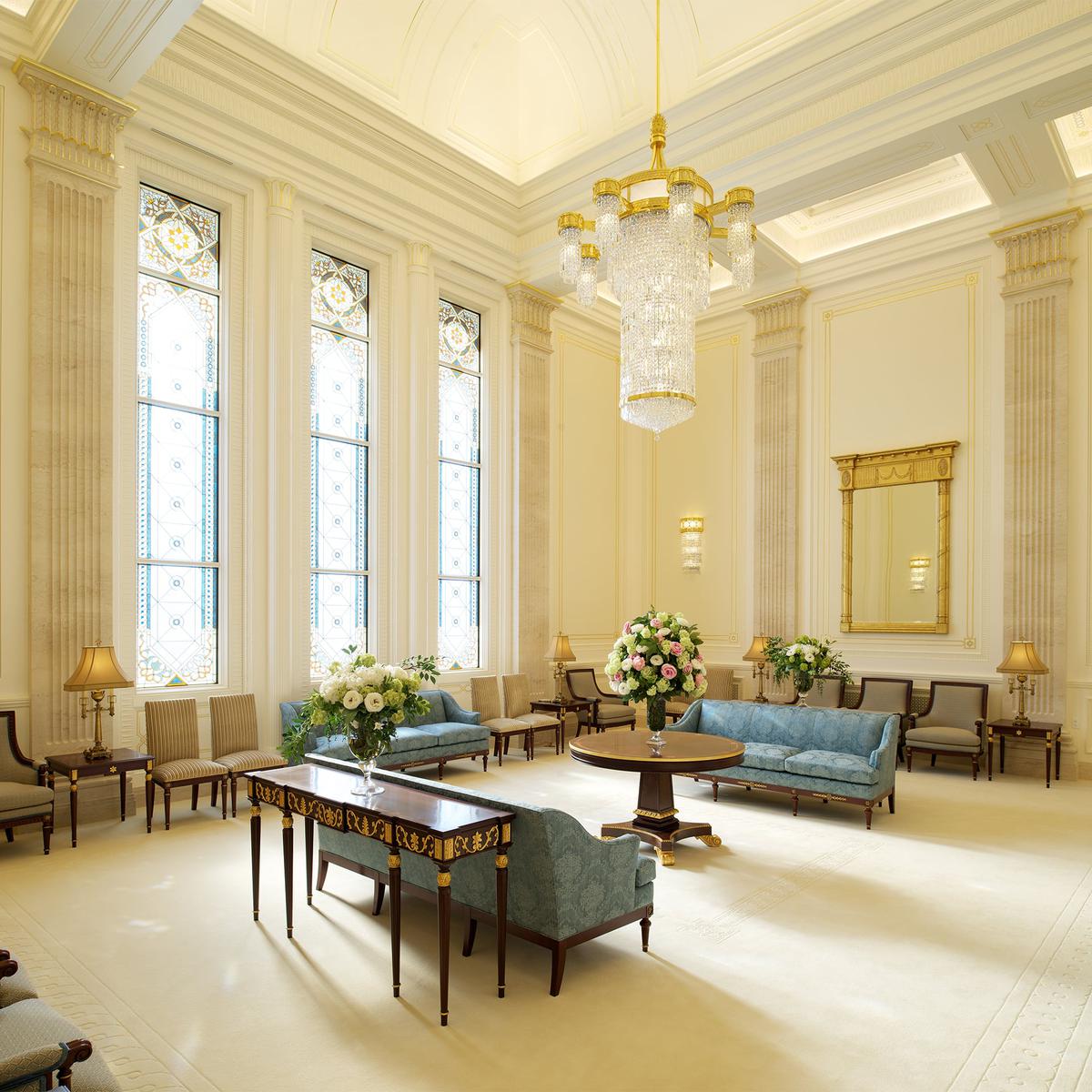 Indianapolis Indiana Temple Celestial Room, one of the most sacred rooms in the temple, n.d.
Credit: Church of Jesus Christ of Latter-Day Saints
View Source

MHTN architects, of Salt Lake City, designed the building. Made of the finest building materials available, the structure takes architectural inspiration from the Soldiers And Sailors Monument and the Indiana World War Memorial. The structure is neoclassical in design. The exterior is clad in cream-colored limestone. The building has a single attached end tower with an angel Moroni statue at its peak. This tower design resembles the Soldiers and Sailor Monument with Lady Liberty as its crowning figure. The base of the structure sits on a rectangular base, with a colonnade, as does the World War Memorial.

Motifs in the Temple’s design also include the state tree, the tulip poplar. Metalwork on the fencing and doors of the building includes depictions of the Tulip Poplar flower. The Tulip Poplar is also featured in glasswork throughout the building. 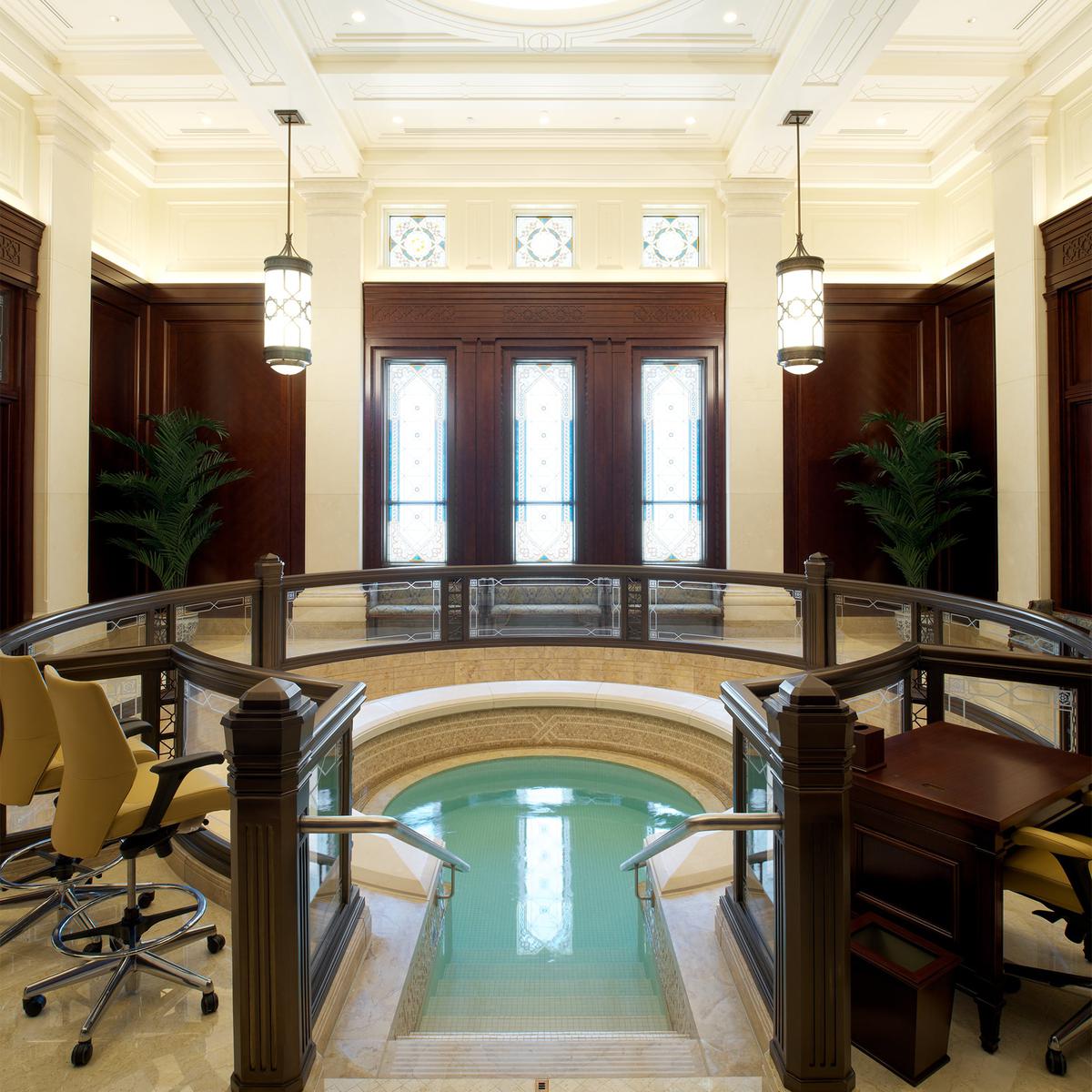 A mural, inspired by southern Indiana’s rural landscapes and featuring Indiana’s state bird, the cardinal, dominates the walls of the temple’s first instruction room. On the interior, the structure’s tall-stained-glass windows, from Indiana and Utah, provide large amounts of natural light in almost every room. Highly decorated interior spaces have paintings of Jesus, crystal chandeliers, and gold-plated mirrors. They have high ceilings and many architectural details that incorporate touches of gold, marble, and cherry finishes. One baptismal room has a large font raised on bronze statues of 12 oxen, which represent the 12 tribes of Israel.

Latter-day Saints view temples as among the world’s most sacred places, serving as Houses of the Lord. In temples, members of the Church make covenants and perform ordinances such as baptisms for the dead, eternal marriages, and the endowment. Latter-day Saints also view the temple as a place where they can be closer to God and receive personal revelation.

The temple is not open to members of the general public. It serves Latter-day Saints in nine stakes (a stake is a collection of contiguous congregations called branches or wards) in Indiana and eastern Illinois.

Mormon Temple The Indiana Temple is located north of Indianapolis in Carmel at 11565 Temple Drive.