(Jan. 29, 1933-May 4, 2007). An abstract artist, Engron was born in Indianapolis to Reuben and Hattie Starks and attended the Indianapolis Public Schools. After suffering injuries while working at the U.S. Postal Service, she decided to attend the Herron School Of Art. She graduated in 1984, at the age of 42.

Engron was one of a few Black abstract expressionist artists working at the end of the 20th century. Although she worked in the same vein as such world-renowned artists as Jackson Pollock, known for his “drip technique” of pouring paint onto a horizontal surface, she created her own style that focused on color and the creative process. She often poured ink onto the canvas and tipped the canvas so the ink would roll around to create drips and runs of black or colored ink. She would then use the ink drips as the pattern for her abstract painting.

Early in her practice, Engron did some work on foil to reflect light. She, however, primarily painted with oil on canvas. Along with using dynamic colors, she played with multiple brushstroke textures in her artwork. Inspired by organic forms and patterns found in nature, her paintings feature floral abstractions, nudes, and traditional geometric abstraction. 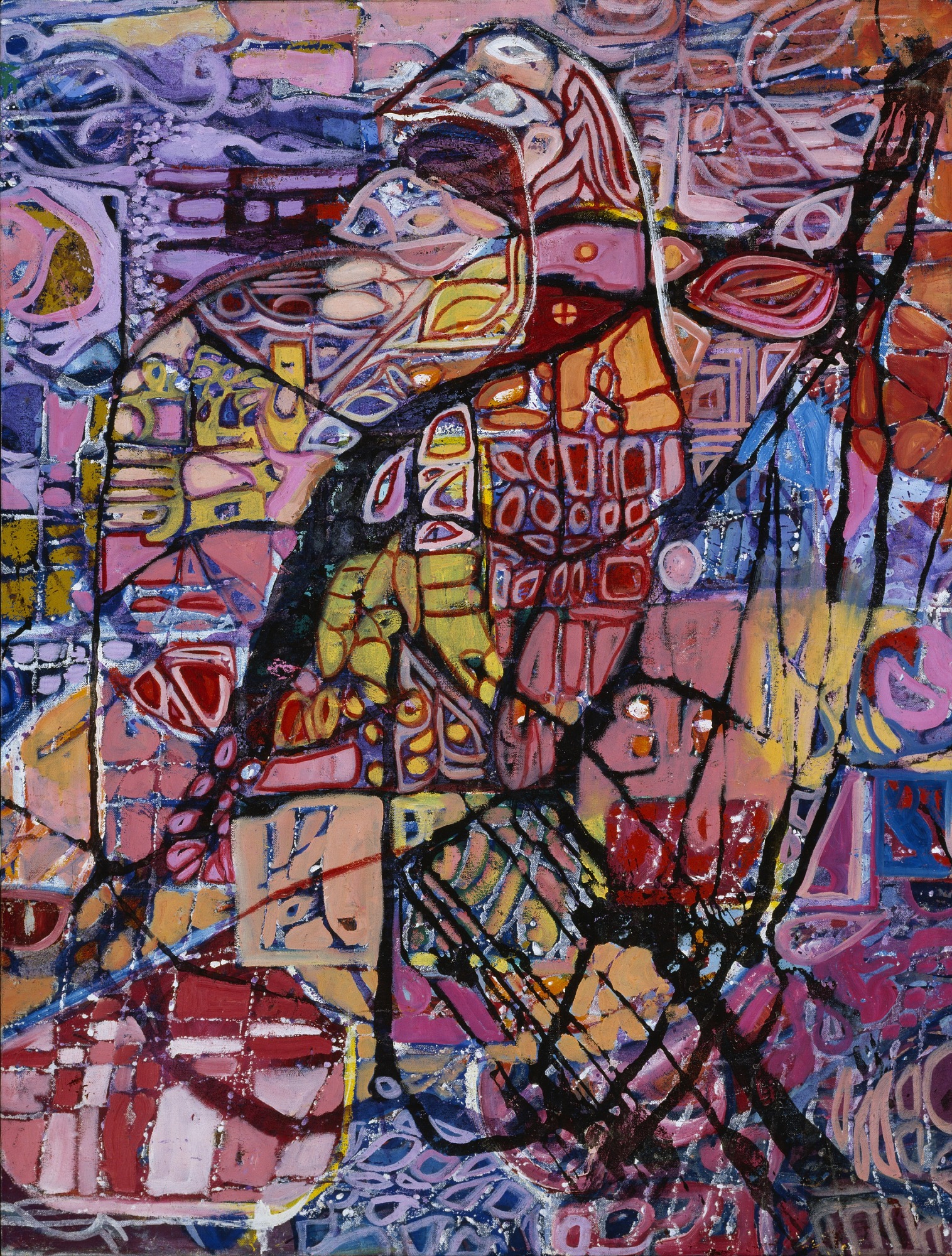 Though she worked primarily in abstract images, Engron also produced some figurative paintings. In this mode, she became part of the worldwide neo-Expressionist artistic movement of the 1970s and 1980s. These neo-Expressionists abandoned pure abstractionism and returned to portraying the human body and other recognizable objects but rejected traditional standards of art composition.

After graduating from Herron, Engron collaborated with some other local women artists. In 1987, Engron and Lois Main Templeton presented an exhibition of their abstract work at the First Indianapolis Business Center. The two women, both Herron alumnae who started their studies at a nontraditional age, forged a lifelong friendship. Engron also worked with Alice Usher, well-known locally for her portrait busts of children and for several commissions for the Episcopal Diocese of Indianapolis, in an exhibition in 1990.

Engron was one of two Black artists included in Herron’s Welcome Back alumni show at the Herron School of Art in 1988. Then-Herron Gallery director Robert Roman focused his efforts on exhibiting important contemporary art at Herron that was breaking new ground. Welcome Back featured the works of 20 nationally acclaimed artists, all of whom shared connections to Indiana. The exhibit included the works of David Smith, Robert Indiana, Bruce Nauman, and Herron alumni Garo Z. Antreasian and Robert Berkshire. Engron’s inclusion in the exhibit placed her in company with artists with national reputations. Later that year, Herron showcased Engron’s work in another group exhibition. This event featured Engron and nine other mid-career artists, including Indianapolis photographer Carl Robert Pope.

Notably, in 1991, the Gallery Tanner in Los Angele displayed Engron’s works in There But for the Grace: A Tribute to Pathfinders and Visionaries. The exhibit featured national artists considered groundbreaking abstractionists. It situated Engron as a seminal figure in abstraction and one of few Black women painters who focused exclusively in pure abstraction. Along with such artists as Alma Thomas, nationally recognized with works in the permanent collection of the Metropolitan Museum of Art in New York City, Engron stands out as a Black woman who found success working in the genre.

The Smithsonian Museum of American Art, the Indiana State Museum, Fine Arts Department, the Fort Wayne Museum of Art, and private collections throughout the U.S. and Germany hold Engron’s paintings.

The exhibition of Engron’s work continues posthumously. Gallery Quotidian in Los Angeles exhibited a retrospective of her paintings in 2016.