The principal characteristics which distinguish the Episcopal church from other denominations are a hierarchical organization with bishops, priests, and deacons; membership in the worldwide Anglican communion; worship according to a liturgy contained in the Book of Common Prayer; and emphasis on the sacrament of the Eucharist or Holy Communion, especially recently.

The Episcopal Church has maintained a small but relatively important place in Indianapolis since the 1830s. Itinerant clergy occasionally appeared during the 1820s to perform baptisms and marriages, but not until 1835 did the national church declare the importance of domestic missionary work and elect the Rev. David Jackson Kemper to the newly devised position of Missionary Bishop of Indiana and Missouri. Kemper was an indefatigable missionary, and Indiana remained for 15 years a part of his widespread diocese, which included most of the Midwest.

By the time Kemper made his second journey to Indiana in 1838, he found a fledgling congregation in Indianapolis, Christ Church (now Christ Church Cathedral). From its establishment, in July 1837, the church met in private homes, but in 1839 the congregation erected a simple wooden building on the Circle. When the congregation outgrew that first building in 1857, it was sold to Bethel African Methodist Episcopal and moved to a lot on Georgia Street, where it was destroyed in a racially motivated arson attack. The present stone Gothic church was built on the Circle in 1859. Christ Church was the only Episcopal congregation in Indianapolis until 1864 when Grace Church was established.

In 1849, Indiana’s Episcopalian population was robust enough to warrant the creation of the Episcopal Diocese of Indiana, allowing Kemper to focus his missionary efforts toward the Upper Midwest. Many candidates to replace Kemper were duly elected bishop of Indiana, but all declined until Englishman Rev. George Upfold accepted the post and was consecrated Bishop of Indiana at Christ Church in December 1849. The diocese experienced a clergy shortage during its early years and Upfold served jointly as bishop and rector of St. Johns Lafayette for many years until clergy numbers increased.

Partisan feelings during the Civil War affected Christ Church, whose rector, the Rev. Horace Stringfellow, was forced to resign because of his sympathy for the plight of Confederate prisoners at Camp Morton. Fearing for his safety, Stringfellow fled to Virginia and is said to have served as a chaplain in the army of General Lee. In 1866, a group of like-minded Episcopalians founded St. Paul’s Church, erected a handsome building at New York and Illinois streets, and elected Stringfellow their rector. In the same year, Grace Church was built at the corner of Pennsylvania and St. Joseph streets. 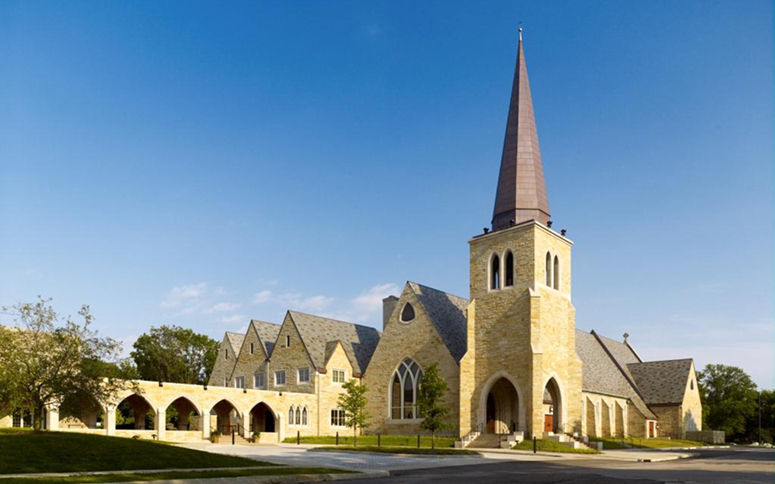 In 1865, Joseph Cruikshank Talbot, who had preceded Stringfellow at Christ Church and subsequently became missionary bishop of the Midwest, was elected bishop coadjutor. He succeeded George Upfold as Bishop of Indiana in 1872, serving until 1883. Under his leadership, St. George’s Church was established at Morris and Church streets as a financially dependent mission of Christ Church to serve the people on the south side. Finally organized as a self-sufficient parish in 1880, it had a varied career as parish and mission until 1959. In 1875, the diocese adopted the cathedral system, and St. Paul’s was made the pro-cathedral (a church that serves as a cathedral without a permanent designation), shifting the official seat of the bishop away from Lafayette.

The next bishop, David Buel Knickerbacker (1883-1894), moved the denomination farther north. He relocated Grace Church, temporarily abandoned and rented out as a gymnasium, to the corner of 16th Street and Central Avenue. In 1891, the parish was elevated to the status of pro-cathedral and developed a complex of buildings around it, used variously as a school (later Knickerbacker Hall), home for working girls, home for the aged, and bishop’s residence. The current church was completed in 1911 and renamed All Saints Church; it remained the pro-cathedral until 1948.

In the late 1880s, the denomination extended a mission to the African American citizens of Indianapolis. Members of both Christ Church and St. Paul’s helped establish St. Philip’s on West Street in 1888, first as a mission (sometimes called St. Paul’s Chapel), then in 1901 as an organized church. The dedication of its first church in 1907 was noted as the first racially integrated Episcopal service in the city’s history, with authors James Whitcomb Riley and Meredith Nicholson noted as having attended.

White males led the Episcopal church in 19th-century Indianapolis. Women were welcome, within certain limits to worship, to run the altar guild and the missionary society, and to do visiting and secretarial work. The election of Amelia Brown Mansur to the vestry of Christ Church in 1859 was a rare exception, one not to be repeated for many decades.

Apart from the continuing financial struggle to maintain buildings, pay the clergy, and run church schools, the principal issue for Episcopalians across the country in this period was “churchmanship.” The Oxford Movement had rocked the Church of England with its efforts to rediscover the Catholic heritage and tradition of the Anglican church. Echoes of this occurred in the United States with efforts to bring Catholic ritual and practice—vestments, processions, genuflection, incense, signing the cross, frequent communion—into the heretofore largely Protestant American church. Bishops Kemper and Knickerbacker were both of this “high church” persuasion.

The first congregation to follow these practices was St. David’s Church at 21st and Talbott streets. Led by the Rev. C. S. Sargent, this church existed from 1895 until 1919, although without the approval of Bishop John Hazen White during its first five years. White only served from 1895 until 1899, when the state was divided into two dioceses, with White becoming the first bishop of the Diocese of Michigan City (now renamed the Diocese of Northern Indiana), encompassing the northern third of the state. The southern portion of the state became the Diocese of Indianapolis.

The first bishop of Indianapolis, Joseph M. Francis (1899-1939), was essentially a “maintainer,” though he served as a chaplain in World War I and spoke out for the League of Nations and against the Ku Klux Klan. In 1919, the Church of the Advent opened at 33rd and Meridian streets in a former Baptist building. Serving the growing community on the north side of the city, it prospered and 30 years later moved into a new building as Trinity Church. St. Matthew’s opened in Irvington in 1924. Richard A. Kirchhoffer (1939-1959) succeeded Francis as bishop. The church was heavily involved in many kinds of war work.

After World War II came several important changes. In 1953, women were accepted for the first time as delegates to the diocesan convention, and Christ Church became the pro-cathedral in 1954. The gift of $1 million in 1953 from Christ Church member Eli Lilly marked the beginning of a period of intense interest and influence on his part in church affairs. The diocese purchased Waycross in Brown County as a conference center.

As the city grew, the diocese made efforts to serve the expanding population. In 1949, St. Paul’s moved from downtown to its present location at 61st and Meridian streets. In 1956, St. Alban’s was founded in the northeast part of town with help from Trinity Church, and the next year the Church of the Nativity began with help from St. Paul’s, on Lantern Road in the northeast corner of Marion County. St. Matthew’s moved east from Irvington into Warren Township, and in 1959 St. Timothy’s succeeded St. George’s on the south side of the city.

John P. Craine, bishop from 1959 to 1977, made more of an imprint on the local church than many of his predecessors. It was the era of agitation for civil rights and of civil disobedience, of Vietnam and community action. Craine, working with Archdeacon Frederic P. Williams and Cathedral Dean Paul Moore, and with the financial support of Eli Lilly, believed that the church should be in the forefront of action. During these years the Episcopal leadership was involved with the Southern Christian Leadership Conference and with the founding of a local chapter of the Indianapolis Urban League; Haiti was adopted as a companion diocese; a diocesan center was set up in connection with All Saints Church; and Episcopal Community Services was established, as well as the Julian Center for abused women.

In 1960 Trinity Church founded St. Richard’s School, beginning with a kindergarten. The most successful of local efforts for a church school, St. Richard’s by 1990 included eight grades, a new building, and 250 students.

Eli Lilly died in 1977— the same year as Bishop Craine—and left generous bequests to Christ Church, Trinity, and St. Paul’s, creating an endowment that challenged all three to make responsible use of their resources. Craine’s successor was Edward W. Jones (1977-1997). During Craine’s tenure, changes in the national church also affected Indianapolis Episcopalians.

The first two regularly ordained Episcopal female clergy in the nation were in Indianapolis, Jacqueline Means and Natalya Vonnegut in 1977. The local church backed experiments such as using theater as a form of worship and endorsed changes in the prayer book, providing alternative services, the passing of the peace, the use of laymen to pass the chalice, and a greater emphasis on the Eucharist. The Episcopal Church approved a major revision of both the Book of Common Prayer in 1979 and the hymnal in 1982—Archdeacon Williams was active on the commission which produced the new hymnal. The new prayer book was the culmination of a shift toward Eucharist as the focus of worship, aligning more with Catholic sentiments. Not all these changes were universally popular, and many conservative members dropped away, becoming part of the worldwide Anglican realignment.

Bishop Jones’ consecration was likely the first to be performed under rubrics from the new prayer book. Under his leadership, congregations became more accustomed to the new prayer book and hymnal, and to the appearance of women as clergy, vestry members, lectors, and chalice bearers. The church sought new areas for outreach: through John P. Craine House, an alternative to prison for women offenders; and to the elderly, the sick, and the homeless through the multidenominational Metro Council and through a new shelter for the homeless built in 1990 in connection with All Saints.

Catherine Waynick was elected bishop in 1997 and led the diocese until 2017. Her episcopate was marked by continuing debates on the role of women and members of the LGBTQ+ community in the ordained clergy.

Jennifer Baskerville-Burrows succeeded Bishop Waynick in 2017. She had been the director of networking for the Diocese of Chicago prior to her consecration and her election is notable for being the first African American woman elected bishop diocesan in the Episcopal Church. Additionally, she was the first woman in The Episcopal Church to succeed a woman as bishop. As of 2020, Bishop Baskerville-Burrows leads 47 congregations throughout the southern portion of the state, including 10 located in Indianapolis.