In 1918 British journalist Sir Evelyn Wrench founded the English-Speaking Union in London “to draw together in the bonds of comradeship the English-speaking peoples of the world.” The English-Speaking Union of the United States was established in New York in 1920 as a nonprofit, non-political membership organization whose current mission is to promote scholarship and the advancement of knowledge through the effective use of English in an expanding global community. 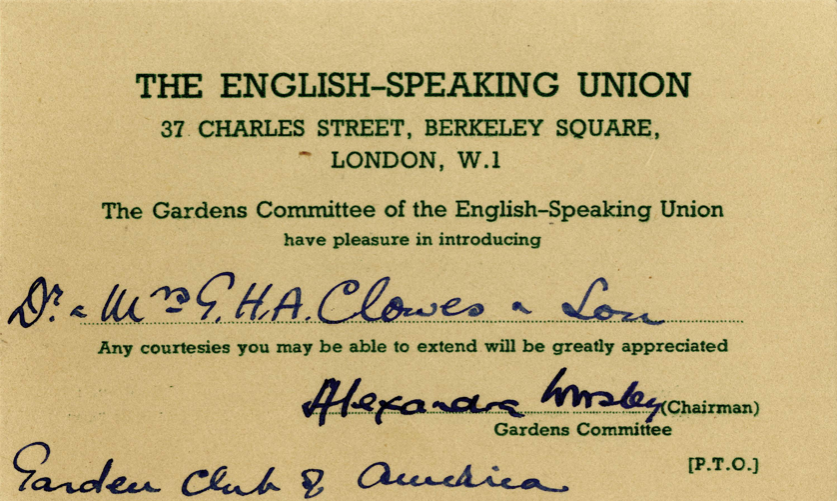 Charles J. Lynn, the retired vice president of Eli Lilly And Company, founded the Indianapolis Branch in 1949 and served as its first president until 1958. Later presidents included his wife, Dorothy B. Lynn, 1958–1973, and Robert S. Ashby, 1973–1989. The membership, drawn largely from central Indiana, numbered approximately 75 during the early 2020s. The Indianapolis Branch is one of 68 located throughout the United States and is part of a global network of E-SUs promoting educational opportunities in more than fifty countries around the world.

The Indianapolis Branch has provided scholarships since 1951 for Commonwealth students to study at Indiana University in Bloomington and, since 1976, for teachers from Marion County schools to study at British universities. For many years, the group has held luncheons and dinner meetings with speakers such as Admiral Chester W. Nimitz (1950), British Ambassador Lord Harlech (1964), Margaret Thatcher (1969), General Maxwell D. Taylor (1973), and British Ambassador Sir Antony Acland (1990). Since 1988 the branch has sponsored an annual Shakespeare competition with contestants from Indiana high schools giving dramatic presentations. The winner each year has participated in the national competition in New York. The Indianapolis Branch hosted the annual meetings of Region VI (which includes the Midwest) in 1994 and 2004 and the annual general meeting of the English-Speaking Union of the United States in 2001.

The term Propylaeum refers to two buildings and an ...Read More »