Ordering food and having it delivered to your car became common in the 1930s when many families first owned an automobile. The city has witnessed several successful drive-ins that began in this decade, starting with the Peacock. Henry Mewborn introduced the drive-in restaurant business to Indianapolis when he opened it in early 1930. Located at 38th Street and Massachusetts Avenue, it was the first restaurant in the city to serve patrons in their cars.

In 1932, A. R. McComb built the Wigwam, located next to the Indiana State Fairgrounds. Newly constructed in 1939 and renamed the Tee Pee, it became an Indiana landmark and stood until 1988.

Spencer’s North Pole was built in 1937. Its name and location were changed in 1952 to the Pole at 16th Street and Lafayette Road.

The Parkmoor, one of the largest drive-in restaurants of its kind, became Merrill’s HiDecker in 1956. The Ron-D-Vu opened its doors to Butler University students in 1940. One of three Knobby’s restaurants (at 52nd Street and Keystone Avenue), which was built in 1955, operated until 2001, but by the time it closed it was a sit-down restaurant.

Al Green’s drive-in opened on East Wellington Street in 1947. In 1953, it became the nation’s first drive-in to experiment with curb phone service. By the 1990s, the curb service and its outdoor movie screen disappeared, and by 1992, Al Green’s closed completely. 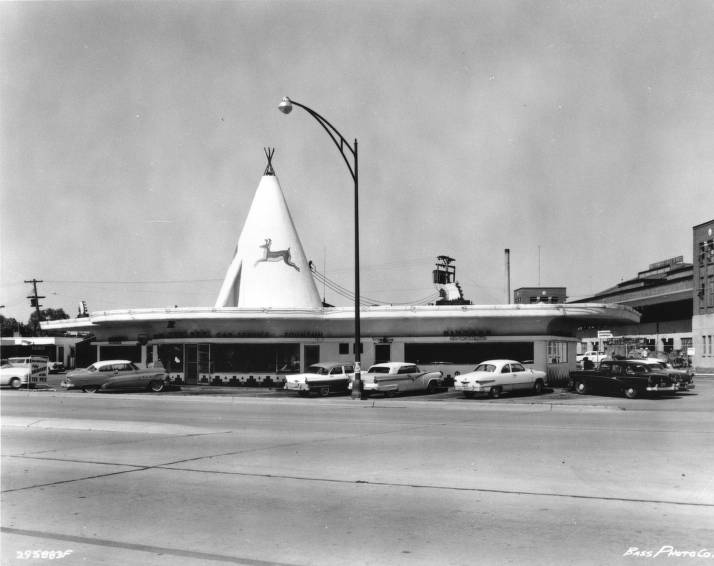 The popularity of drive-in restaurants reached its peak in the 1950s and continued through the 1960s when “cruising” was a common activity for adolescents. Popular drive-ins included Hubbard’s, the Blue Ribbon, Borky’s, Northwood, Southwind, Southern Triangle, and the Steer-In. Steak N Shake located its first drive-in at Lafayette and Tibbs roads in 1954.

Drive-in restaurant business began to decline in the 1970s as fast-food businesses offering quick food at low cost began to rise, with drive-up windows a standard feature. However, drive-ins still have a following today. Restaurants such as Edward’s (since 1957) and Mug ’n Bun (since 1960) have remained in operation, providing their customers with delicacies like homemade rootbeer and giant tenderloins.