Since 1975, most scheduled bus service between points in Marion County has been provided by the Indianapolis Public Transportation Corporation. Known as IndyGO since 1996, it is a municipal corporation with authority to tax real estate in the county outside Beech Grove, Lawrence, Southport, and Speedway, subject to approval by the City-County Council and the State Board of Tax Control, for support of bus service.

That year the city passed a jitney bus ordinance that required a $10,000 bond for each vehicle “as surety for passengers” and city license fees for each bus in operation. Buses also were limited to routes not served by Streetcars. Following the regulations of the ordinance, Peoples expanded steadily. 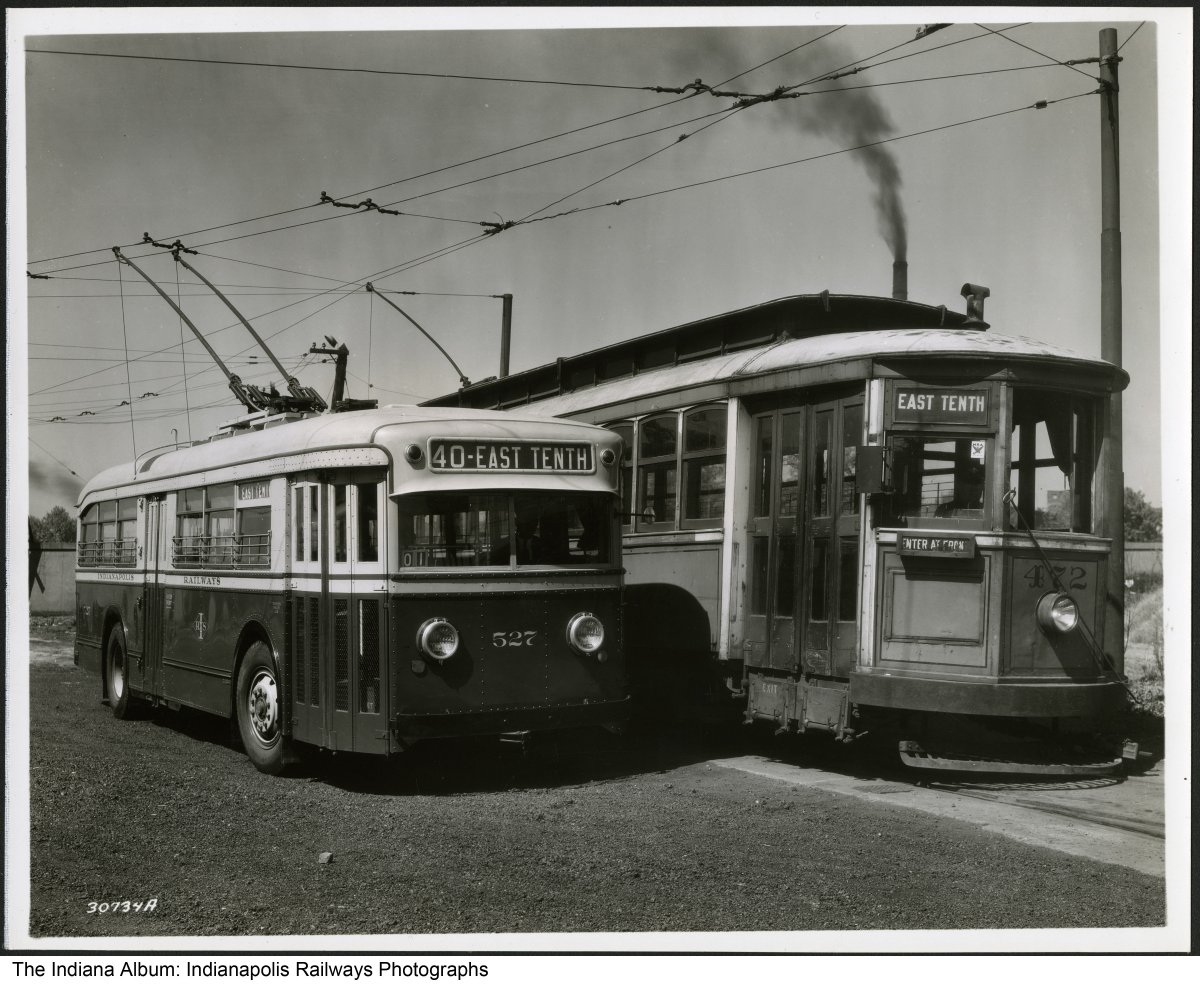 The Indianapolis Street Railway Company also used buses beginning in 1925, extending its lines on Capitol and Central Streets to points north of 54th Street. It added other routes and, in 1927, bought all of the shares in Peoples, creating an integrated system regulated by the Public Service Commission of Indiana. Buses went mostly to outlying areas, streetcars to densely populated areas.

The Railway Company operated in receivership from 1930 to 1932, when its system was bought by Indianapolis Railways, Inc. (renamed Indianapolis Transit System in 1953). This company began almost at once to replace the traditional streetcar—with its rails that were expensive to maintain and its lack of maneuverability in automobile traffic—substituting trackless trolleys on some lines and buses on others. The last streetcar lines were converted to bus lines from 1952 to 1953, so the streets involved could be made one-way. By then, trackless trolleys carried the most passengers. But the bus—more maneuverable and lacking wires to build and maintain—was apparently the mode preferred by Frederick J. Johnson, leader of a group of non-local investors who bought control of the company in 1955. Buses entirely replaced trackless trolleys in 1957.

Under Johnson’s leadership, the transit company made a profit on operations every year from 1955 to 1969 and kept the system running until the Indianapolis Public Transportation Corporation (then known as Metro) purchased it in 1975. However, the number of passenger rides had fallen from 118 million in 1946 to 12.4 million in 1974 as the company faced a cycle of losing passengers to the automobile. It responded by raising fares and cutting service to make ends meet, and lost more passengers as a result.

In 2014, the Indiana General passed a law that had direct implications for public transit in Indianapolis. It put in place provisions to hold a referendum in Indianapolis for mass-transit projects. It also added a clause that required IndyGo to establish a nonprofit foundation and to raise privately 10 percent of its operating costs, which translates to $5-to-$6 million annually. That same year, IndyGo broke ground on a new transit center in downtown Indianapolis. The Julia M. Carson Transit Center opened for public service in June 2016 and allowed for a more centralized transfer system.

In 2017, IndyGo formally launched its plan to create a bus rapid transit system in Indianapolis. Construction began on the first of three planned lines, the Red Line, in June 2018. The Red Line opened for revenue service in September 2019, with articulated buses traveling in a mostly dedicated route from Broad Ripple south to the University Of Indianapolis. A $75-million Small Starts grant from the Federal Transit Administration paid for 78 percent of the total $96.3 million in construction costs.

The COVID-19 pandemic led to an overall decline in ridership of 51.8 percent from 2019 to 2020, from more than 9.2 million to around 4.8 million passengers. For the full IndyGo system, the number of passenger rides fell from a high of nearly 975,000 for the month that the Red Line launched to a low of about 281,000 in April 2020. Ridership for the highly anticipated Red Line followed that trend. When the service began in September 2019, ridership reached nearly 246,000, but during the month of May 2020, at the height of the pandemic, only about 51,000 people rode the Red Line. This decline made further expansion of the planned rapid transit to Lawrence (Purple Line) and the Indianapolis International Airport (Blue Line) uncertain as of 2021.