The Athenaeum was constructed for the Socialer Turnverein Aktien Gesellschaft (Social Gymnastic Society Stock Association), founded in 1892 to raise money to build a home for the Socialer Turnverein and other liberal German societies of Indianapolis. Originally called Das Deutsche Haus (The German House), the building was constructed in two phases—the east wing in 1893-1894, the west wing in 1897-1898.

The structure was renamed the Athenaeum as a result of the nativism unleashed against German-Americans, their language, and culture during World War I. The Turnverein later changed its name to the Athenaeum Turners.

The building is the design work of Bernard Vonnegut of the prominent architectural firm of Vonnegut And Bohn. Both Bernard Vonnegut and Arthur Bohn were American-born of German immigrant parents and received architectural training in Germany. His father, Clemens Vonnegut Sr., was one of the founders of the city’s first Turnverein in 1851. Bernard Vonnegut’s brothers also were involved. Clemens Jr. was an officer of the stock association, and George and Franklin were active gymnastics instructors and leaders of the Turnverein. Herman Lieber, the successful merchant, art dealer, and art patron, initiated the idea of the building, and he focused much attention on it. As a result, he became known as “the father of the German House.” Lieber was president of the stock association.

The building was equipped with a gymnasium, locker rooms, meeting rooms, restaurant, auditorium, billiard room, bowling alleys, a ball-and-concert hall, and a wall-enclosed beer garden with a concert pavilion. An important cultural and social center of Indianapolis, the Athenaeum also became an important education center and convention center

The building not only served the needs of the Turnverein and other liberal German organizations housed there but also the city at large. It was an important convention and entertainment venue. The American Public Health Association held its 1900 annual meeting at the site. At this national conference, Dr. Walter Reed revealed for the first time to the public the origins of yellow fever. In 1912, automobile pioneer Carl G. Fisher hosted a meeting at the Athenaeum during which the Lincoln Highway was born. 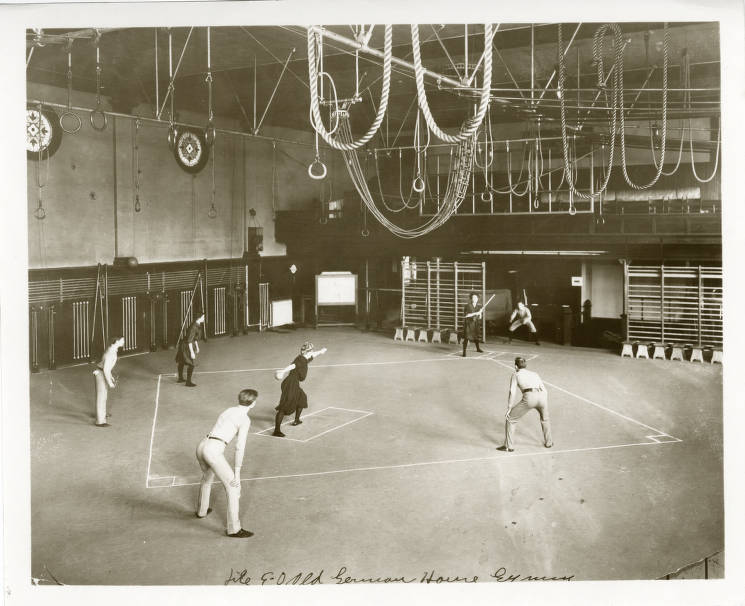 The Athenaeum played an important role in the history of American education. From 1907 to 1970 it was the home of the Normal College Of The North American Gymnastic Union. The college was founded in 1866 to properly train Turnlehrer (gymnastics teachers) for the many Turnvereins throughout the nation. The college was in New York, Chicago, and Milwaukee before settling in Indianapolis. It is the oldest school of physical education in the nation. In 1941 the college merged with Indiana University. The college became the Indiana University School of Physical Education on the Indiana-Purdue University (IUPUI) campus. The graduates of the Normal College spread the physical education curriculum to public schools throughout America.

From 1972 to 1980 the Athenaeum served as the first home of the Indiana Repertory Theatre. The American Cabaret Theatre (later simply The Cabaret) made its home in the building’s theater from 1990 to 2009. It was the filming location of two feature films: Eight Men Out (1988) and Going All the Way (1997).

Architecturally the Athenaeum remains a significant example of the German Renaissance Revival style in America. It exhibits the hallmarks of the style with its decorated stepped gables, steeply pitched, massive roof, facade sculpture, limestone banding, and art-glass windows, some of which exhibit Jugendstil influence. The sculpted terra cotta and limestone is the work of local artist Alexander Sangernebo. The building was listed on the National Register of Historic Places in 1973 and listed as a National Historic Landmark in 2016.

The Athenaeum, suffering from decades of neglect, has undergone repair and redevelopment since its ownership changed in 1991 to the Athenaeum Foundation, Inc. In January 2015, the Athenaeum Foundation announced a historic restoration and a capital campaign that led to a gift from Indianapolis philanthropists Frank and Katrina Basile, and the main theater space was renamed in their honor. To date, it houses the city’s oldest restaurant (1894), gymnasium (1894), theater space (1898). Major tenants include Ymca, Rathskeller Restaurant, and the Max Kade German-American Center of IUPUI.