In 1979, Indianapolis civic leaders set out to create a new state park to celebrate Indiana and the Hoosier spirit. While the full vision for this park had yet to be determined, it eventually would be located just outside of Indianapolis’ central business district along the White River, at 801 West Washington Street. This section of the city was undergoing a period of deindustrialization at the time. While some of the area’s factories, warehouses, and related businesses were still in operation, others had been closed for several years and sat vacant. Surrounding these industrial properties was a small group of residential neighborhoods, including Stringtown and Haughville.

Created by the Indiana General Assembly in 1979, the White River State Park Development Commission (WRSPDC) oversaw the project’s development. It operated as a quasi-governmental agency separate from the Indiana Department of Natural Resources (DNR). This factor allowed the commission to build the park without restrictions often placed on state agencies. WRSPDC would still need the support of state legislators, however, to provide the necessary funding for this effort.

Many legislators had questions about the project’s administration, cost, and design objectives. The park’s first master plan, revealed in 1981, attempted to address these issues. Proposed attractions included a domed stadium, new zoo, world-class amateur athletic complex, museums and theaters, botanical gardens, an amusement park comparable to Tivoli Gardens in Copenhagen, Denmark, and a 750-foot “Indiana Tower” to serve as a symbol of the city (similar to the St. Louis Arch).

Supporters argued White River State Park would provide economic opportunities, attract new businesses and tourists, contribute to residents’ quality of life, and celebrate Indiana’s heritage. It also would lead to the transformation of both the White River and nearby Central Canal into visual and recreational showpieces.

While some state legislators remained reluctant about the project, particularly those outside of Marion County who felt their constituents would not benefit from the park’s location in Indianapolis, the Indiana General Assembly approved initial funding. This money was combined with a major gift from the Lilly Endowment, Inc.

The commission used some of these funds for land acquisitions, a process that lasted two decades as the agency navigated a combination of willing, reluctant, and oppositional owners. Willing owners sold, donated, or transferred their properties quickly, which was the case with Military Park.

Other owners, meanwhile, originally decided to retain their property and/or wait for better appraisal values. In certain cases, the commission decided to use eminent domain rather than wait for land to become available, which resulted in lawsuits that were eventually settled out of court.

The agency also ran into problems with some of the vacant buildings it had already acquired. The most notable example involved the Oscar C. McCulloch School (IPS School No. 5). In 1922, School No. 5 relocated from West Maryland Street to West Washington Street. Architect Robert Frost Daggett designed the new building, which featured a lavish terracotta decor. Beyond its physical appearance, the school was noted for its use as an educational and social services center for the ethnically diverse residents of Haughville and nearby neighborhoods.

School No. 5 closed in 1978 and was purchased by the White River State Park Development Commission two years later. Both school alumni and preservationists at Historic Landmarks Foundation of Indiana (now known as Indiana Landmarks) wanted the building preserved. The commission, however, planned to demolish the school and construct the new Eiteljorg Museum Of American Indians And Western Art on the site. Demolition began in 1985 after a commission meeting that had not been opened to the public. This illegal act was quickly discovered, and the remainder of the demolition was halted the next day after an injunction was served by Landmarks.

Eventually, a settlement was reached whereby the commission was able to demolish the rest of the school building but would have to preserve and incorporate a portion of it into the new Indiana State Museum planned for the park. Similar preservation controversies over other park-owned properties would arise in future decades.

By the late 1980s, a portion of the original White River State Park master plan was complete. Major attractions included the Indianapolis Zoo (opened at the old Kingan And Company site in 1988), River Promenade (1988), the National Institute For Fitness And Sport (1988), and the Eiteljorg Museum (1989). Other items from this original plan, such as the Hoosier Dome, were developed, but outside of the park. 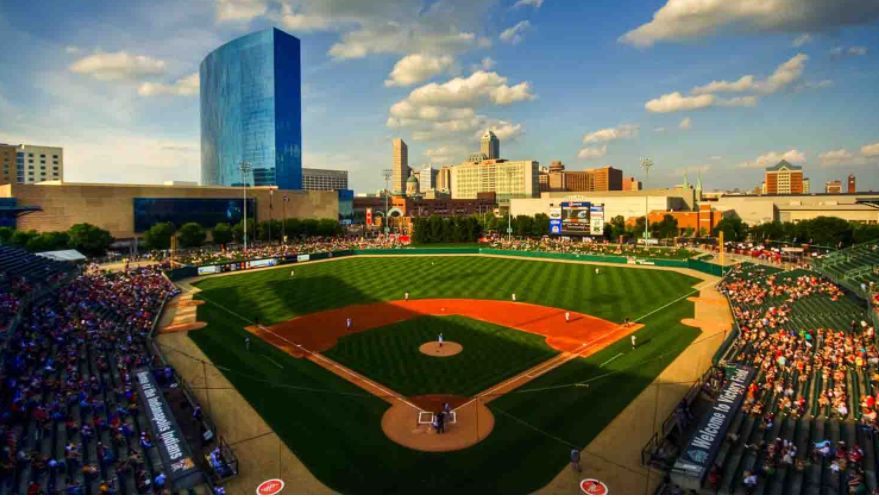 Two of the park’s most ambitious proposals, “Indiana Tower” and the Tivoli-style amusement center, never came to fruition. The former, with an estimated cost of $20 million, was deemed too expensive. The latter, meanwhile, could not find a private developer willing to take on the project. While Knott’s Berry Farm had originally expressed interest in creating a 45-acre entertainment center inside the park, it withdrew its offer in 1991. The firm cited uncertainty about public acceptance and political commitment to the project as the main reasons for this decision.

In early 1993, the commission shifted its vision for White River State Park to an education, science, and technology theme that could embrace and offer recreation, arts, and culture. Attractions that opened in the succeeding years reflected this vision, including the city’s first IMAX Theatre (opened at the old Acme-Evans Company site in 1996), Victory Field (1996), White River Botanical Gardens (1999), National Collegiate Athletic Association (Ncaa) Headquarters (1999), NCAA Hall of Champions (2000), and the Indiana State Museum (2002), which connects to the IMAX Theatre and includes a portion of the façade from IPS School No. 5.

The last private industrial property on the park’s site, Beveridge Paper Company, was purchased by the commission in 2000. This land was quickly transformed into green space, which includes the White River State Park Lawn and Amphitheater. Since 2004, this venue has hosted live concerts from local, national, and international artists. In 2021, Teachers Credit Union purchased naming rights to the amphitheater, which became known as TCU Amphitheater at White River State Park.

Today, White River State Park continues to enhance the health and well-being of visitors through various cultural, entertainment, and recreational amenities. Beyond the numerous local institutions located on the site, the park is home to several green spaces, trails, and waterways, including the Canal Walk, a 3-mile pedestrian loop that is part of the Central Canal’s extension into the park.

It is also home to several historic landmarks and memorials. Some of these attractions include the Old Washington Street Bridge, Historic Indianapolis Water Company Pumphouse, McCormick’s Rock (a commemorative boulder honoring John Mccormick), and the Congressional Medal Of Honor Memorial.

This unique combination of features has made the park an attractive venue for a variety of programs, events, and festivals, including the White River State Park Games, Shakespeare in the Park, Art in the Park Sculpture Program, Indy Irish Fest, Vintage Indiana Wine Fest, and Indy Pride. It has also resulted in the Canal and White River State Park’s designation as one of six cultural districts in downtown Indianapolis by Downtown Indy, Inc.

White River State Park The urban park urban park is located along the eastern and western banks of the White River.

Upon her arrival in Indianapolis in 1837 Eunice Bullard Beecher, ...Read More »

Marion County was organized into nine townships in 1822. Within ...Read More »

The concept for the Indianapolis Zoo first emerged in ...Read More »

The Water Works Company of Indianapolis, the predecessor to ...Read More »