Henry Ward Beecher was the first pastor, serving 1839 to 1849. Under his dramatic preaching, the church grew from 32 parishioners to well over 200 and took a prominent part in the frontier civic life of the state capital. Beecher’s sermon on various important subjects delivered to the young men of Indianapolis during the winter of 1843 brought national attention to him when a collection of seven of his “lectures” was published in 1844. Many members of the judiciary attended Beecher’s messages on personal faith, slavery, Temperance, and education. The church’s first permanent building, dedicated in 1840, stood on the northwest corner of Market Street and the Circle. Nicknamed the “Pepper-box Church” because of the shape of its steeple, it resembled a New England-style church. The founding years set patterns that have continued to the present: a prominent role in civic life, liberal theology, and learned and eloquent preaching.

Strong clergy leadership helped Second Presbyterian adjust its ministries to post-Civil War urban conditions. The Reverend Hanford Edson (d. 1920), pastor from 1864 to 1873, brought a vision for the whole city, as was shown by his influential call for a public library in Indianapolis. During his pastorate, the church constructed a neo-Gothic edifice, with a spire over 160 feet tall, on the northeast corner of Vermont and Pennsylvania streets. Starting new churches and missions was characteristic of this period. By the 20th century, Second Presbyterian had been instrumental in planting seven churches or missions. Programs combining evangelism and social services such as the Exposition Sunday School, opened in 1867 and later renamed the Peck Mission. The Mayer Chapel on the south side, beginning its ministries in 1893, represented responses to new urban problems (see Sunday Schools).

In 1921, the Reverend Jean S. Milner (d. 1964) began a long pastorate that lasted until 1960. In a series of evening lectures, he opposed fundamentalism on the issue of evolution, and his book The Sky Is Red (1935) represented the modernist position that saw no conflict between science and religion. Under his leadership, the congregation grew to 1,816 members by its centennial celebration in 1938. Second Presbyterian moved to Meridian Hills after being forced out of its downtown location on the property that is part of the Indiana World War Memorial Plaza. It became the first church to be granted a building permit in the residential area of North Meridian Street. Charles J. Lynn, an elder of the church, and his wife Dorothy donated the 20-acre parcel on which the church is located and also a gift of $1,000, 000 for its construction. Other prominent Indianapolis religious institutions such as Indianapolis Hebrew Congregation followed.

On October 4, 1959, the church began services in its current building at 7700 North Meridian Street. Architects McGuire & Shook, Compton Richey and Associates (Odle Mcguire And Shook) designed and built the church in the classic French Gothic tradition. The main nave is 99-feet long, 54-feet wide, and seats 800 people with space for an additional 200 on the balcony. A Gothic-style chapel in the west transept seats 170 people. An Ascension-stained glass window created by Tiffany in 1902 was moved from the previous sanctuary with new windows designed by Henry Lee Willett. The church also has a powerful pipe organ. 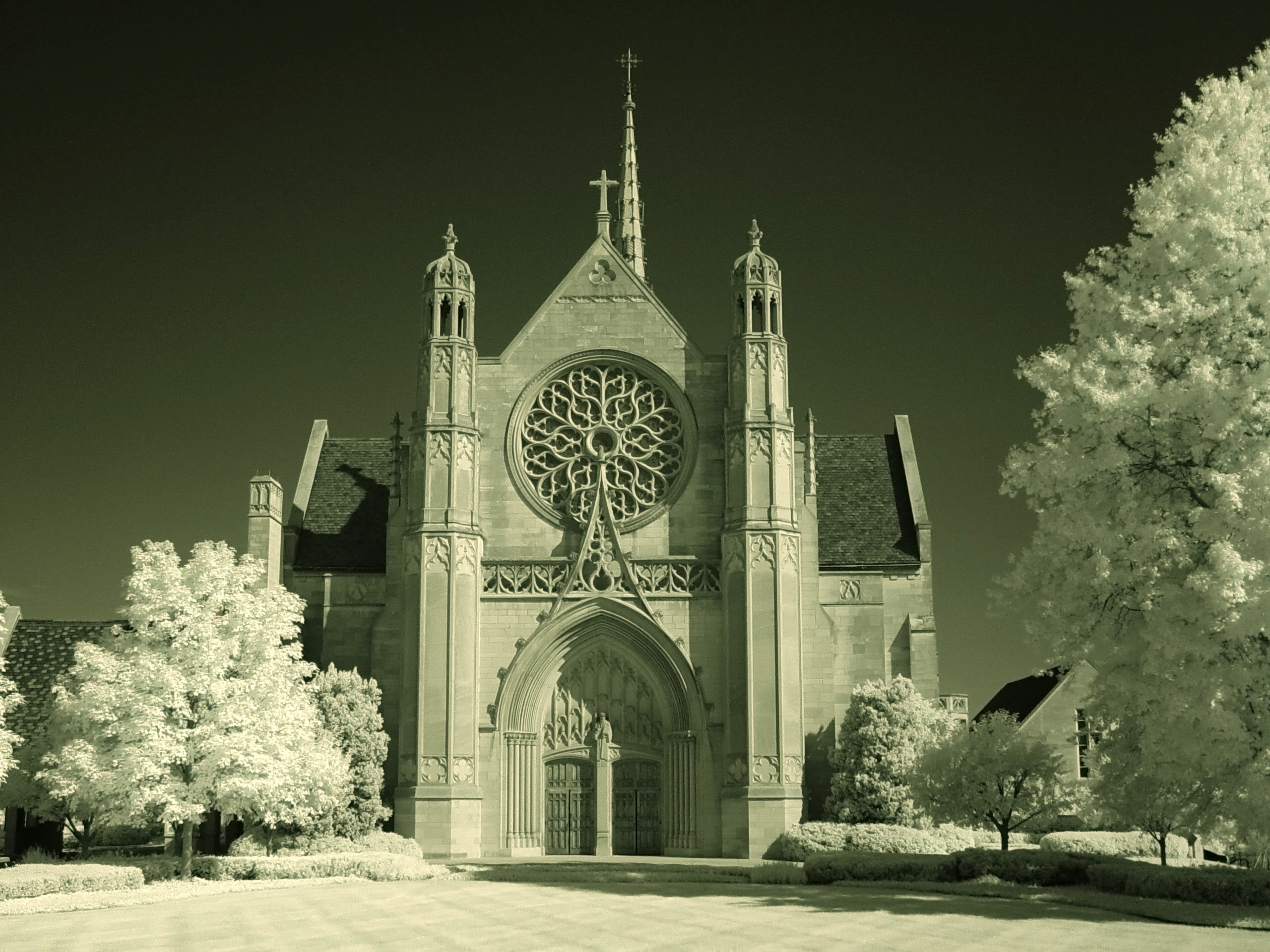 The pastor from 1964 to 1973, Reverend William H. Hudnut Iii, later mayor of Indianapolis, reflected the moderate but active stance of the congregation toward the social upheavals of the 1960s. Hudnut guided the church through changes within the Presbyterian denomination and on issues such as race relations and the Vietnam War. In 1972, Hudnut resigned his pastorate to enter politics, serving first as U.S. Representative from Indiana’s 11th Congressional District (1972-1974) and later as four-term mayor of Indianapolis. Rev. Richard Armstrong (1975-1979) succeeded Hudnut and continued the congregation’s traditional blend of social concern and evangelism with the Ambassadors visitation program and an emphasis on service evangelism.

In 1981 the congregation called the Reverend William Enright as pastor, a role he held until 2004. Under Enright, the congregation reasserted its prominence in city affairs, including sponsoring, with Light Of The World Christian Church, joint services known as Celebration Of Hope. Second Presbyterian received international attention in 1990 when Ryan White’s funeral took place there. Indianapolis Colts quarterback Peyton Manning was a member of the congregation during this period.

Dr. Lewis Galloway became senior pastor in 2006 and served until 2018. In 2018, Second Presbyterian called the Reverend Christopher Henry as pastor.

Presbyterians have been present in Indianapolis since the city’...Read More »

The earliest cultivators of “classical” or “serious” music were ...Read More »

In 1919 Indiana waged a campaign to bring the national ...Read More »