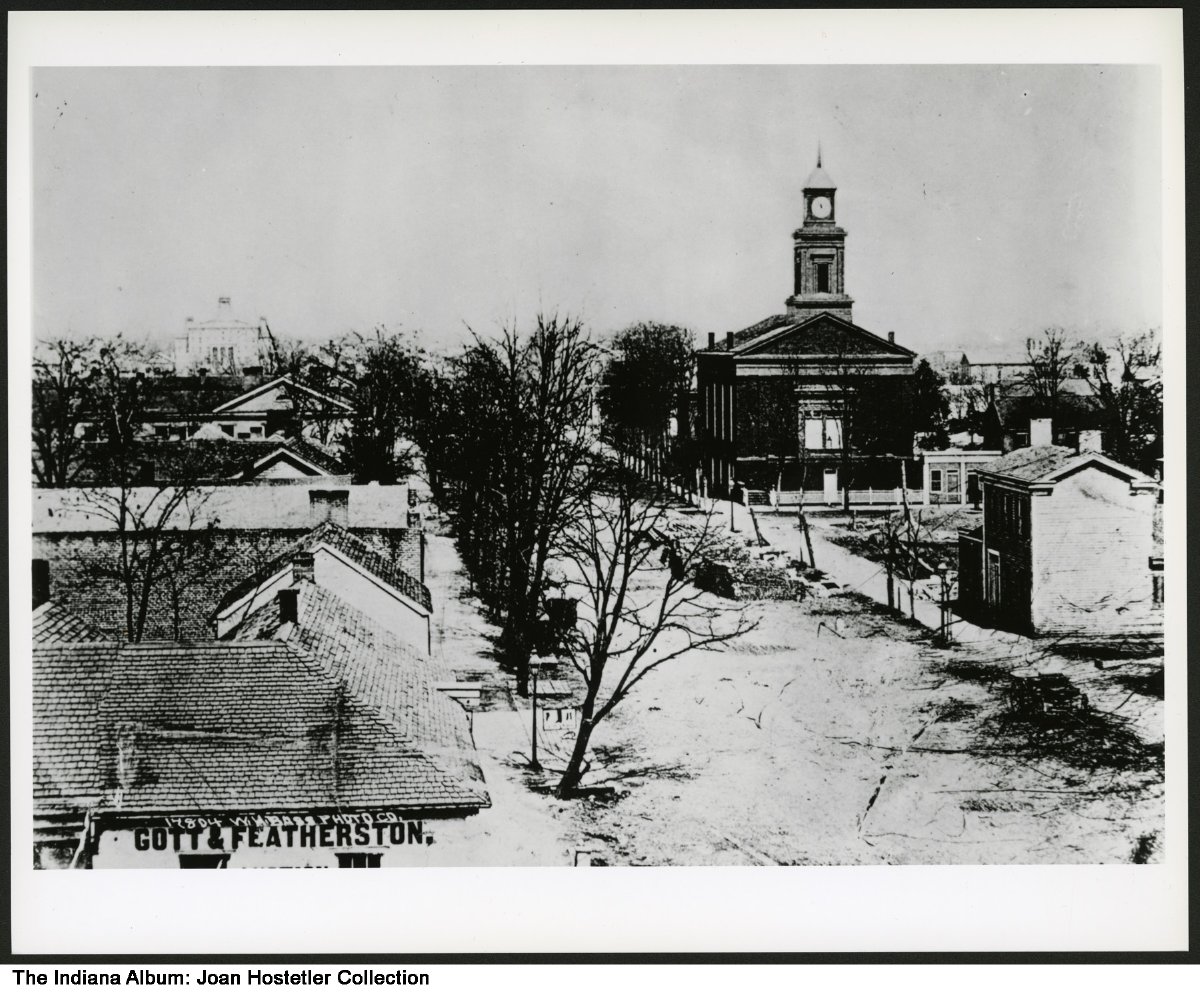 In 1842, with Methodists in Indianapolis numbering over 600, the Indiana Conference of the denomination divided the Indianapolis station into the Eastern and Western charges. Meridian Street formed the dividing line between them. The Indiana Conference designated Wesley Chapel, which became Meridian Street United Methodist Church, as the Western Charge. The Eastern Charge moved into a building at the northeast corner of Pennsylvania and Market streets and was named Roberts Chapel in honor of Bishop Robert R. Roberts, the first Methodist bishop to reside in Indiana. The United Methodist Churches of Indiana call Roberts Park “a mother church” because so many significant events in the history of the church in Indiana have taken place there.

In 1847, the women’s sewing circle purchased a bell that called the congregation to worship, sounded the hours, and served as the city’s fire bell. The town clock was also installed in the bell tower in 1853. By the 1860s, Roberts Chapel had sponsored eight other congregations—a trend that would continue through the 1960s, by which time Roberts Park had sponsored 18 other churches.

The congregation remained at the Pennsylvania and Market streets location until 1869 when it purchased its present one-acre lot at the corner of Vermont and Delaware streets. Renamed Roberts Park to reflect its park-like setting, the new church building was completed and dedicated by Bishop Matthew Simpson in 1876. Indianapolis architect Diedrich A. Bohlen designed the building, patterning it off the City Temple of London, which is Romanesque in style (an architectural style of medieval Europe characterized by semi-circular arches). Roberts Park is constructed of Indiana limestone from Evansville and black walnut from the site.

The building consists of a rectangular central block and bell tower. Buttresses divide the central block into three units, the center being the largest. The center unit has three wide bays formed through the recurring use of round-arched openings. Intricate moldings and ornate columns make it the most embellished part of the exterior. Three compound arches spring from engaged columns with floriated capitals on the ground. These arches set off the main entry doors and the rose window of the church surmounts them. A stone belt separates the ground floor from the upper floors. 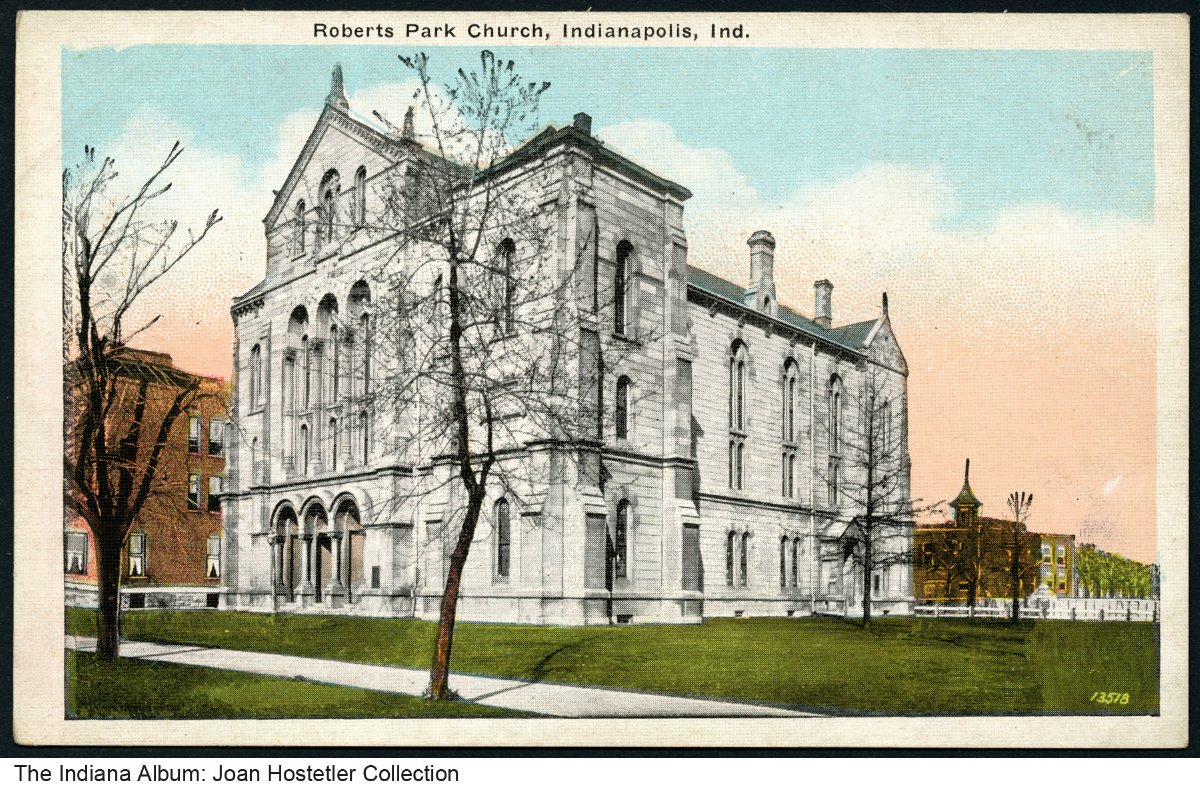 Two upper floors in the center of the block rise as a two-story arcade that is three bays wide and echoes parts of the first-floor design. Another stone belt separates the arcade from the gable in the center section. A 10-foot statue of the Virgin Mary crowns the gable at its vertex. Two smaller units flank each side of the central part of the building. These smaller units are only one bay wide.

The three-story bell tower is on the south end of the building on the west façade. Bohlen originally planned for a steeple that would rise from the tower and provide the location for the church bell. It, however, was never constructed. A pyramid-roofed structure instead houses the bell.

The interior of the church includes finely crafted woodwork. A pair of elaborately carved walnut staircases lead from the ground floor, which includes a lecture room, up to an impressive sanctuary that can accommodate 1,200 people. The main sanctuary has no interior support columns, despite being 62 feet in width and 34 feet in height. The walnut staircases continue up to third-floor galleries.

During the remainder of the 19th century and through the first quarter of the 20th century, the congregation grew in influence. Prominent members included early settler, lawyer, banker, and civic leader Calvin Fletcher; Indiana governor James Brown Ray, who served in the office from 1825 to 1831; and Indianapolis industrialist and cofounder of the Indianapolis Motor Speedway James A. Allison.

During the 1870s and 1880s, the congregation established several missionary groups (one was the forerunner of the YMCA) and sponsored the first public library (see Indianapolis Public Library). In 1889, the Southeast Indiana Methodist Women’s Missionary Society was organized at Roberts Park. Women’s groups also hosted annual festivals and plays at Tomlinson Hall in the 1890s. During the 1920s the congregation supported a city missionary and broadcast services on radio station WFBM. In 1927, Roberts Park added classrooms, a dining room, and a gymnasium, and used these facilities in World War Ii as a servicemen’s center, serving over 90,000 meals and providing entertainment.

By the 1940s, Roberts Park was one of the largest Methodist congregations in Indiana with approximately 1,700 members. In 1940, the Southeast Indiana Methodist Episcopal Women’s Society and Wesley Service Guild were established at the church. Many suburban members continued to commute to the church, and in the 1950s the congregation decided to remain in the downtown area. The gym and stage in the 1927 addition were remodeled to provide more classroom space and an apartment for maintenance staff in the 1950s.

Programming for elderly neighborhood residents and the downtown business population became a focus as early as the 1960s. In 1982, the church building was placed on the National Register of Historic Places. By the 1990s, membership had dropped to 425, most of whom were suburban commuters, but the congregation has remained active in the downtown area. Since 1999, Roberts Chapel has prepared and served over 150,000 meals to people in need who live in the downtown area. The congregation also operates a day-care center.

In 2015, Roberts Park sparked controversy with its Homeless Jesus bronze statue by Canadian artist Timothy Schmalz. The congregation dedicated the sculpture in November that year “as part of the church’s efforts to raise awareness about homelessness in Indianapolis.” Some criticized the church for spending $40,000 to erect the statue rather than providing food and shelter to the homeless, and others believed that the statue of Jesus huddled on a bench near one of the city’s busiest intersections might attract more homeless to the area. Members of the church defended the statue as a way to ignite much-needed debate about service to the city’s homeless population 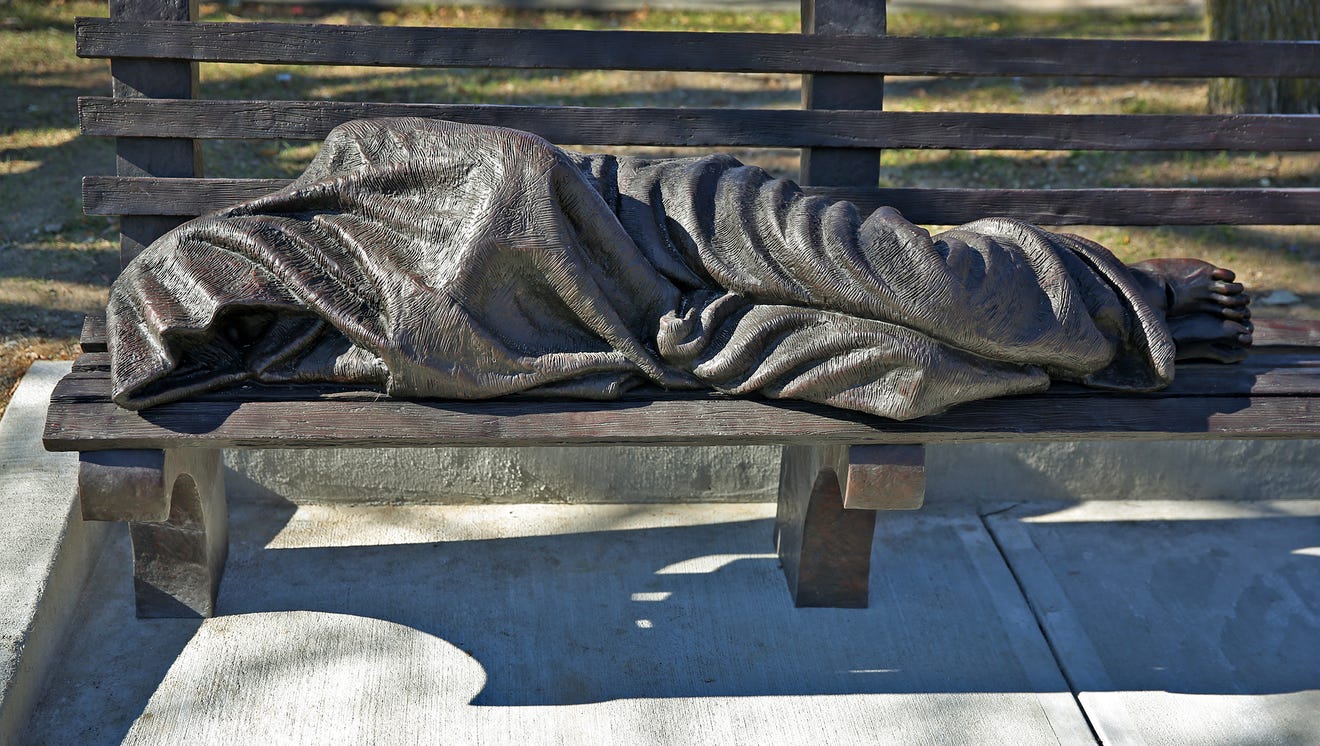 “Homeless Jesus” was dedicated in 2015 by Roberts Park United Methodist Church as part of the church’s efforts to raise awareness about homelessness in Indianapolis.
Credit: Kelly Wilkinson, IndyStar
View Source

In 2018-2019, Roberts Park began making plans to expand its neighborhood services by building a five-story mixed-use structure at the northwest corner of Vermont and Alabama streets. These plans included an expanded day-care facility, a health clinic, and parking and office space. In September 2020, Roberts Park put plans for the new building on hold when a prospective tenant, a medical group that would provide health services at the facility, failed to solidify a lease agreement pending reevaluation of its investment in the project because of the 2020 COVID-19 pandemic.