Erected in 1886, the City Market occupies the lot designated for the location of a market in Indianapolis surveyor Alexander Ralston’S original 1821 plat of Indianapolis. The prolific local architectural firm of D. A. Bohlen And Son designed the current market building, which replaced the original semi-enclosed wood and brick East Market House. The Bohlen firm also designed Tomlinson Hall (1886), which stood immediately west of the market.

The market is constructed of brick with limestone details and a metal roof. Twin towers flanking the central entrance emphasize the front facade. A series of round arches pierce the walls, allowing very little solid wall space. These arches and the classical detailing harken to the Rundbogenstil (Round Arch style) popular in mid-19th-century Germany for railway stations and other institutional buildings.

The interior is significant for its large central hall and flanking side aisles. The cast-iron support system of trusses and columns is exposed. The clerestory windows flood the interior with natural light. The mezzanine around the periphery of the central hall allows for additional stalls. The plan and features of the Market are essentially that of an early Christian basilica with a central nave, flanking aisles, and a clerestory, but lacking an apse. 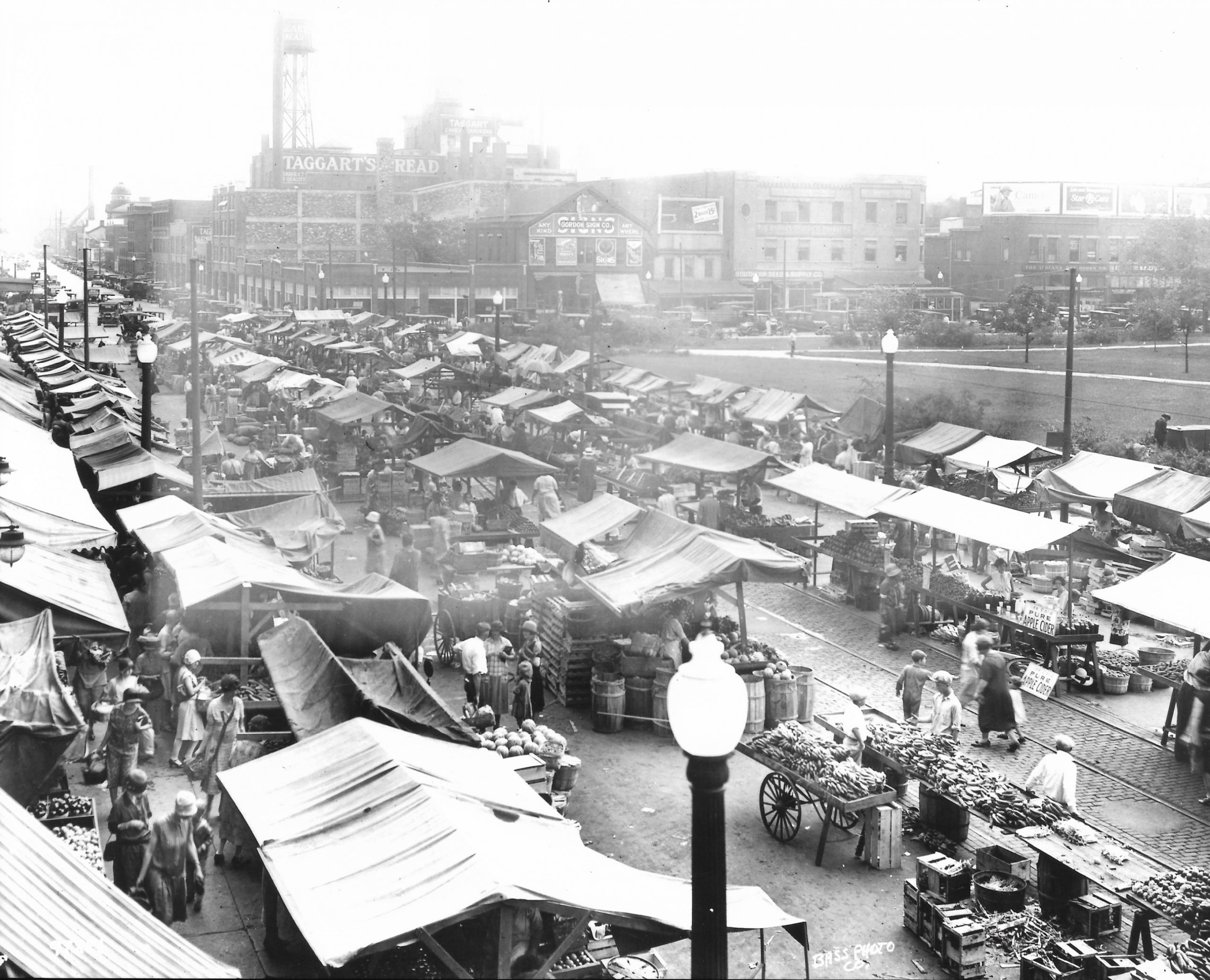 The market buildings worked in tandem, with meat vendors in the Market and produce vendors in the hall. In the early 20th century, a market day would fill Market Street outside the structures with carts and stalls selling locally grown produce from the German southside and other sources.

In 1903, the Market sprouted east and west wing additions. The west wing connected the Market to Tomlinson Hall. The Tomlinson arched doorway came to light in 1975 when both wings were demolished. The remnant doorway was restored as a free-standing architectural relic on the west plaza. Tomlinson Hall burned and was razed in 1958.

Mayor Richard G. Lugar committed to the Market’s restoration and redevelopment as a part of a larger plan to revitalize the moribund downtown. Thanks to a $4.75 million grant from lilly endowment, the Market revitalization came to fruition. Preservationist H. Roll Mclaughlin of James Associates Architects And Engineers oversaw the restoration and the creation of the east and west wings and plazas.

City Market was listed in the National Register of Historic Places in 1974 but was documented by the Historic American Buildings Survey in 1971. Most of the Market stands cater to lunchtime customers, gone are the stands specializing in meat, fish, cheese, produce, and ethnic foodstuffs.

The Market underwent a major renovation in 2007. In 2011 the east wing reopened as a branch of the Ymca and a bicycle shop, reflecting the interests of many downtown workers and residents. The outdoor farmers market was revived in 1997. The plaza area on Market Street and adjacent grounds underwent renovation in 2021.

The Terry Clock stands on the east plaza since 1977. It stood for decades in front of Curtis Franklin Terry’s jewelry store on Indiana Avenue, the center of the local Black community.

The arch and the brick-vaulted basement below the west City Market plaza are all that remain of Tomlinson Hall. The basement is a subterranean expanse once used to store goods. The 20,000-square-foot space full of brick-arched passageways and exposed dirt floors was used to dry meat and transport and store goods from the above-ground marketplace. During the winter of 1911-1912, the mayor used the basement to shelter between 350 and 400 homeless men in what was called the “Mayor’s Pajama Party.” The local police force used the subterranean expanse as a shooting range in the 1960s. The dark, spooky feel served as the backdrop for Halloween parties during the 1980s and 1990s, and Indiana Landmarks regularly hosts historical catacomb tours there.