Butler University occupies more than 300 acres along the east bank of the white river and the central canal, combining the educational and cultural advantages of an urban area with the open vistas of its landscaped campus. The university emphasizes the traditional liberal arts and sciences, combining innovative interdisciplinary approaches with diverse professional and pre-professional programs. 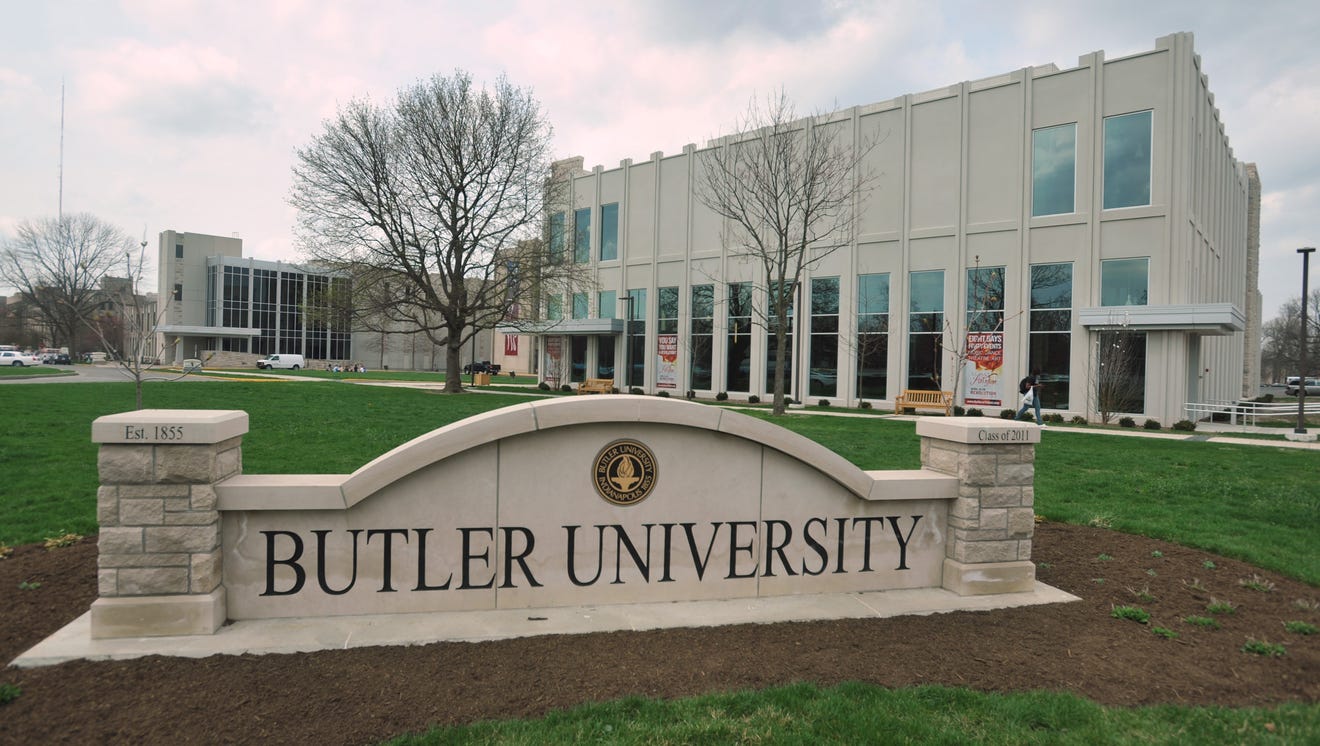 In addition, the School of Religion was established in 1924, but it became an independent institution, Christian Theological Seminary, in 1958. 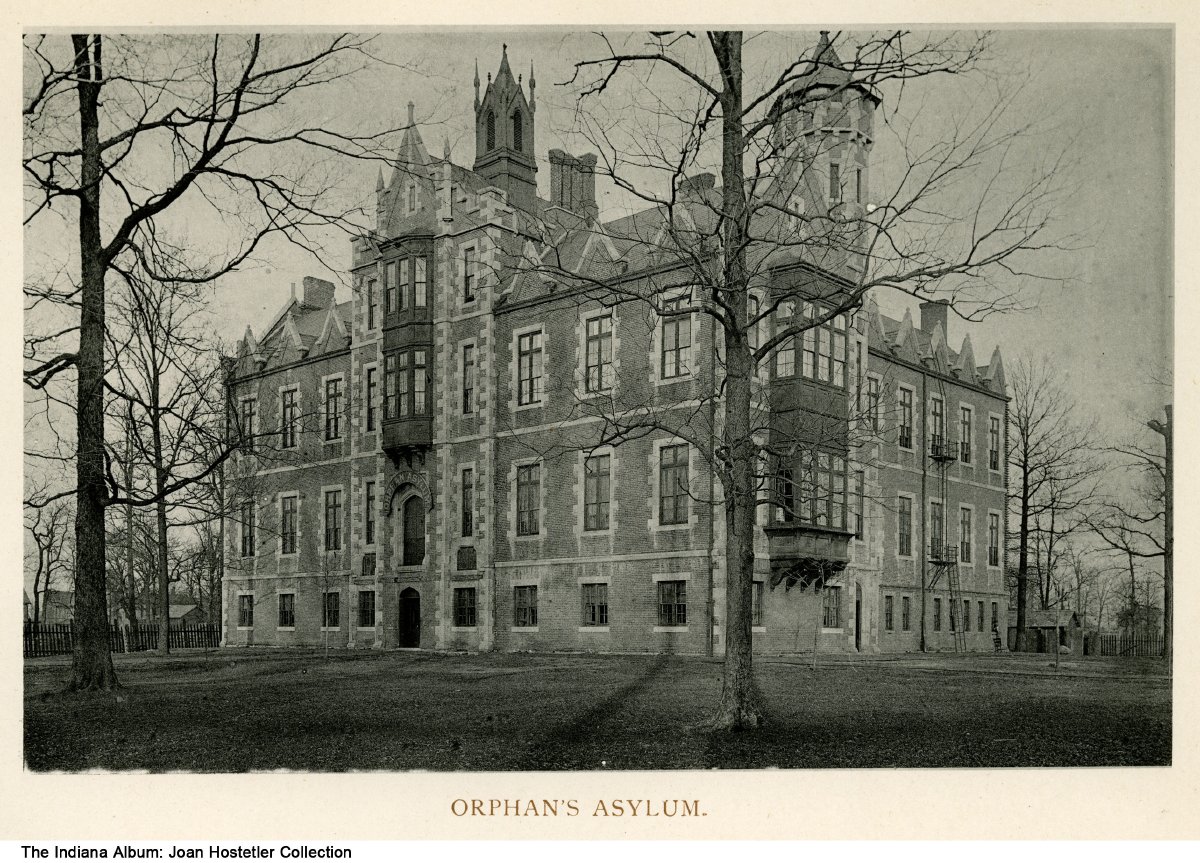 Butler University opened in 1855 as North Western Christian University. The institution was founded by members of the Christian Church (Disciples Of Christ). The charter was written by Ovid Butler, prominent city lawyer and leader of the founders. It called for a non-sectarian institution free from the taint of slavery and that offered instruction in every branch of liberal and professional education. North Western Christian University was among the first coeducational colleges in the nation. It also made no restrictions on race or religious persuasion for enrollment. Stockholders chose a board of directors who operated the university. In 1909 stock was called in and the board became self-perpetuating.

The university has occupied three campuses over its long history. The first campus, occupied from 1855 to 1875, was located on 25 acres at what is now 13th Street and College Avenue. This land was sold to the institution by Ovid Butler from his estate. William Tinsley (later the architect of Christ Church on the Circle) designed the building on the first campus in an innovative style that became known as Collegiate Gothic. That building was torn down in 1909.

It was while the institution was located on this campus that Ovid Butler’s endowment in 1869 of the Demia Butler Chair created the first endowed chair in the country specifically designated for a woman. This also allowed the university to establish the first professorship in English literature and the first department of English in the state. Catharine Merrill, the incumbent of the chair, was among the first women named to be a professor in an American university.

After the Civil War, which had virtually emptied the college of male students, enrollments rose. This along with the creation of a new preparatory department (1853-1907) resulted in an overcrowded building and a need to expand. The institution took advantage of rising land values which made campus acreage valuable and sold the land. Inducements of land and money from the village of Irvington made this an attractive location for the new campus. 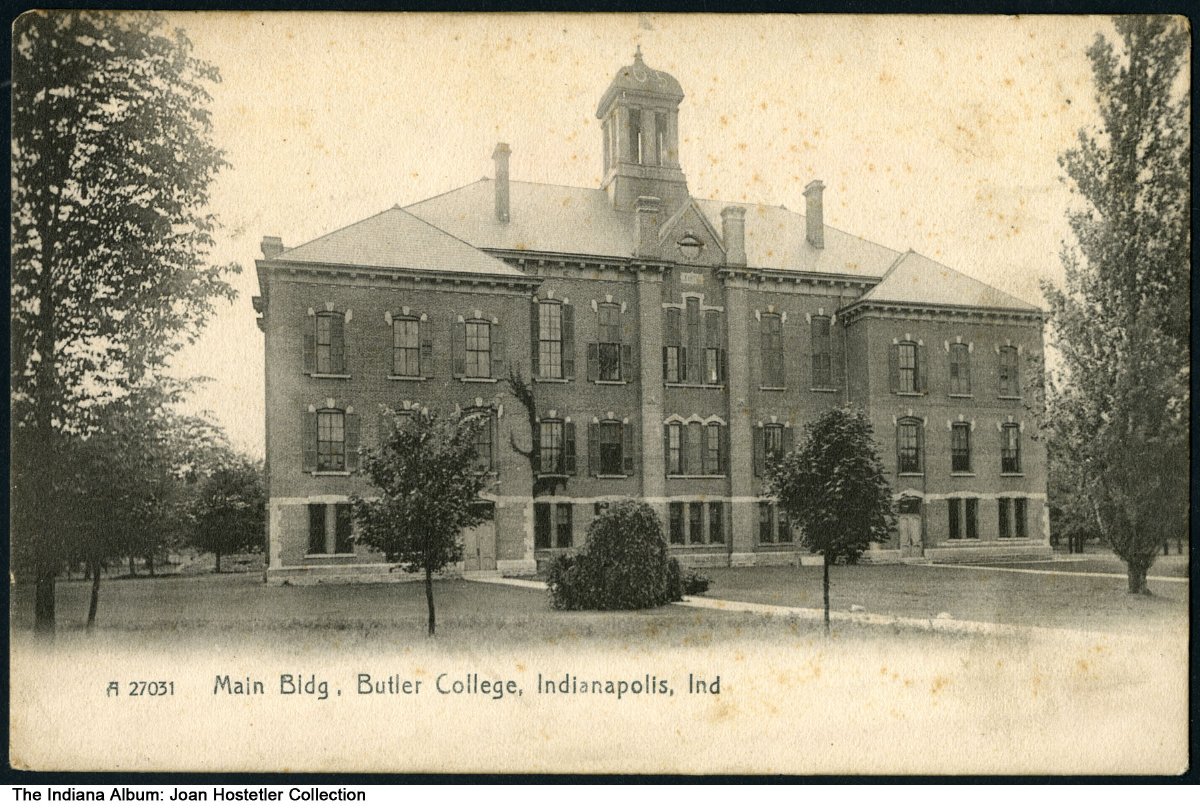 The university moved to Irvington in 1875 and stayed there until the 1920s. In 1877 North Western Christian changed its name to Butler University to honor its longtime leader and major benefactor, Ovid Butler. The Bona Thompson Center was built in 1903 as the institution’s library. The building now serves as the home of the Irvington Historical Society and is the last building that survives from Butler’s time in the area.

While on this campus, Butler University entered into several partnerships with other universities. A short-lived and ineffective University of Indianapolis, chartered in 1896, included Butler as its undergraduate college along with the city’s formerly independent colleges of medicine, dentistry, and law, a combination that quietly expired by 1906. A more important alliance with the University of Chicago, lasting from 1898 to 1908, furthered curricular development and offered special degree privileges to Butler students. 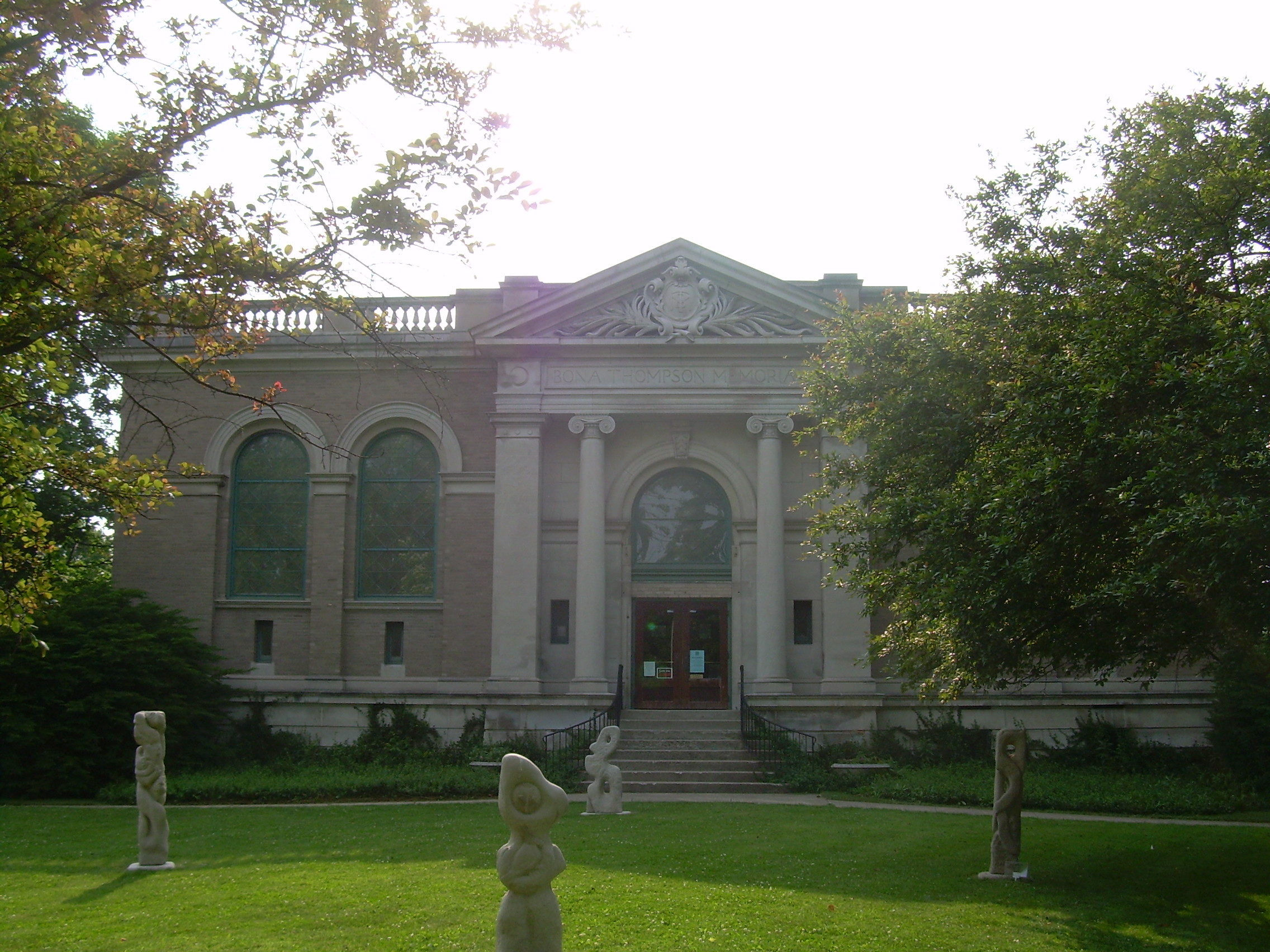 Sports teams were added to the university’s offering of extracurriculars by the 1920s. At Irwin Field, and later at the Fairview campus, teams coached by Harlan Orville (Pat) Page, George (Potsy) Clark, and Paul D. ‘Tony” Hinkle brought out crowds reflecting the rage for collegiate athletics that began during this time period. Other extracurricular activities included performing arts. Notable students-turned-performers from the university’s days on this campus include Todd Duncan, class of 1925, the original Porgy in Gershwin’s Porgy And Bess, and bandsman Noble Sissle.

Butler University moved to its third and present campus, the extensive area of former Fairview Park, in 1928. Once again, it had outgrown its location and needed more space. Moreover, the institution was responding to a call from city leaders to develop the small college into a university that would serve the needs of a growing urban center.

The first academic building constructed at the present campus was Arthur Jordan Memorial Hall. Local architects Robert Frost Daggett and Thomas Hibben designed the $1 million building, which opened on September 27, 1928. It entered the National Register of Historic Places on June 30, 1983.

Another early building on the campus was the fieldhouse, designed by Fermor Spencer Cannon. The fieldhouse, which would later be named Hinkle Fieldhouse for Butler’s legendary coach Tony Hinkle, was the earliest and largest of college fieldhouses in its time. On March 7, 1928, the Butler men’s basketball team beat Notre Dame, 21 to 13, in the first game played in the new fieldhouse. The fieldhouse was the site for the Indiana High School Athletic Association’s annual boys’ basketball state tournament from 1928 to 1971, except for the war years of 1943 to 1945. During World War II, it was temporarily converted into barracks and a mess hall for Navy and Army Air Corps cadets. In 1987 Hinkle Fieldhouse was designated a National Historic Landmark.

With the end of World War II, President Maurice O. Ross (1942 -1962) introduced an innovative University College, a two-year curriculum in general studies required of all students. His foresight and good management earned the confidence of the board, which had up until this point controlled all aspects of the university. The directors now entrusted administrative responsibilities to Ross and his successors.

Though slowed by the Great Depression and World War II, growth in the next half-century continued. Notable additions to the campus include the strikingly modern Irwin Library, designed by architect Minoru Yamasaki, and clowes memorial hall for the performing arts. Clowes Hall brought symphony, opera, ballet, noted speakers, and Broadway productions to the campus and the public.

Butler President Geoffrey Bannister (1989-2000) launched a plan to develop men’s basketball into a winning program at the national level and use it as a marketing tool. The idea was that success on the court would help the university engage alumni and increase annual giving. It would also aid in recruiting more and better students and instructors. Indiana University coach Bob Knight, Purdue University coach Gene Keady, and Indiana Pacers president Donnie Walsh helped develop the growth plan. Barry Collier, basketball coach at the time, compiled a detailed business blueprint. 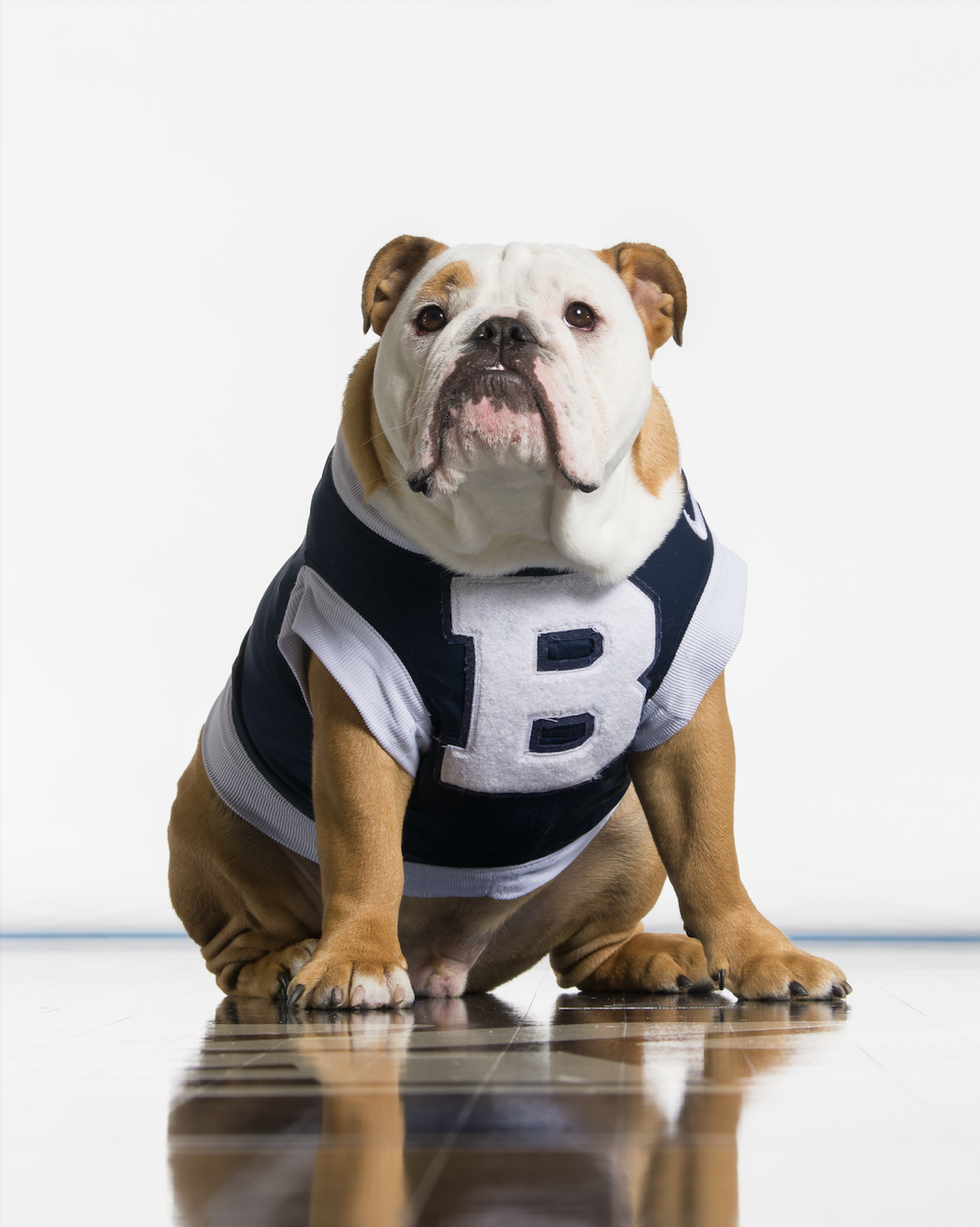 In 2000 the administration added a live Bulldog mascot to aid in the marketing thrust. A university-wide contest was held to give the mascot its name. English Bulldog Butler Blue I (nickname Blue) was the first to serve as the official mascot. Butler Blue II (in service May 20, 2004-May 20, 2015) earned national recognition with stories in The Washington Post, CBS, and ESPN. Butler Blue III (in service February 18, 2012-May 31, 2020) continued to reach national audiences.

When Bobby Fong became president of the university on June 1, 2001, he was one of only 20 Asian Americans to hold the rank of college president in the United States. During his tenure, the university experienced records in freshman enrollment, fundraising, and endowment growth. New student housing, a health and recreation complex, and a classroom and lab addition to the pharmacy and health sciences building were among the changes to the campus. The university also welcomed its sixth college with the founding of the College of Communication in 2010. The college made its home in the Richard M. Fairbanks Center for Communication and Technology (opened in fall 2001 and was the first new academic building on the campus in more than 25 years). Fong considered the graduation rate increase from 62 to 73 percent and the 2010 Phi Beta Kappa invitation to Butler to establish a chapter as the highlights of his term.

James Danko became president in 2011. Under his leadership, the campus underwent a number of changes designed to enrich the student experience. In 2014 the university partnered with American Campus Communities to bring modern housing facilities to Butler. Fairview House (opened 2016) and Irvington House (opened 2018) added more than 1,200 beds to residential housing on campus. The university gained 40 acres of land and buildings when it acquired the Christian Theological Seminary in 2017. The College of Education moved into CTS’s main academic building in the fall of 2018. The Lacy School of Business moved into a new 111,000 square-foot building in 2019. That same year, a $100 million renovation and expansion of the science complex began with the construction of a building to connect Gallahue Hall and the Holcomb Building and a glass atrium. 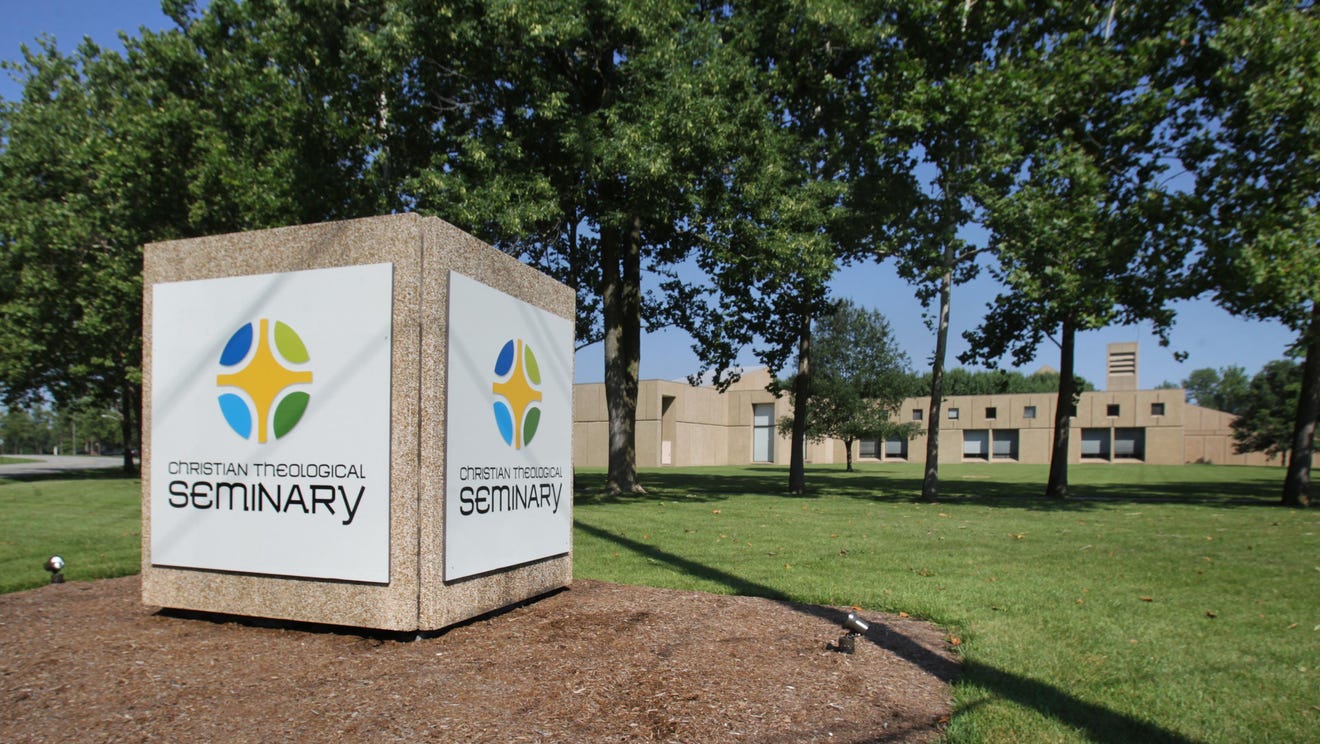 Butler University’s graduates fill the ranks of the city’s lawyers, teachers, businessmen, doctors, and dentists, as well as having achieved prominence in other endeavors on both state and national levels. Butler students have become college presidents like Frank H. Sparks of Wabash; physicians and scientists like Harvey Wiley, father of the U.S. pure food and drug laws; authors like James G. Randall, noted Civil War scholar; and newsmen like Edwin C. Hill, Ralph (Luke) Walton, Corbin Patrick, and Hilton U. Brown.

Butler University The university is located on the near north side of Indianapolis.

Literary clubs have had great popularity in Indianapolis. In ...Read More »

Upon her arrival in Indianapolis in 1837 Eunice Bullard Beecher, ...Read More »

Americans give generously to education, second only to religion, ...Read More »