Although one author declared Indianapolis “among the best prepared” cities in America when war came, it is doubtful that it was any more ready for the outbreak of World War II than the rest of America. 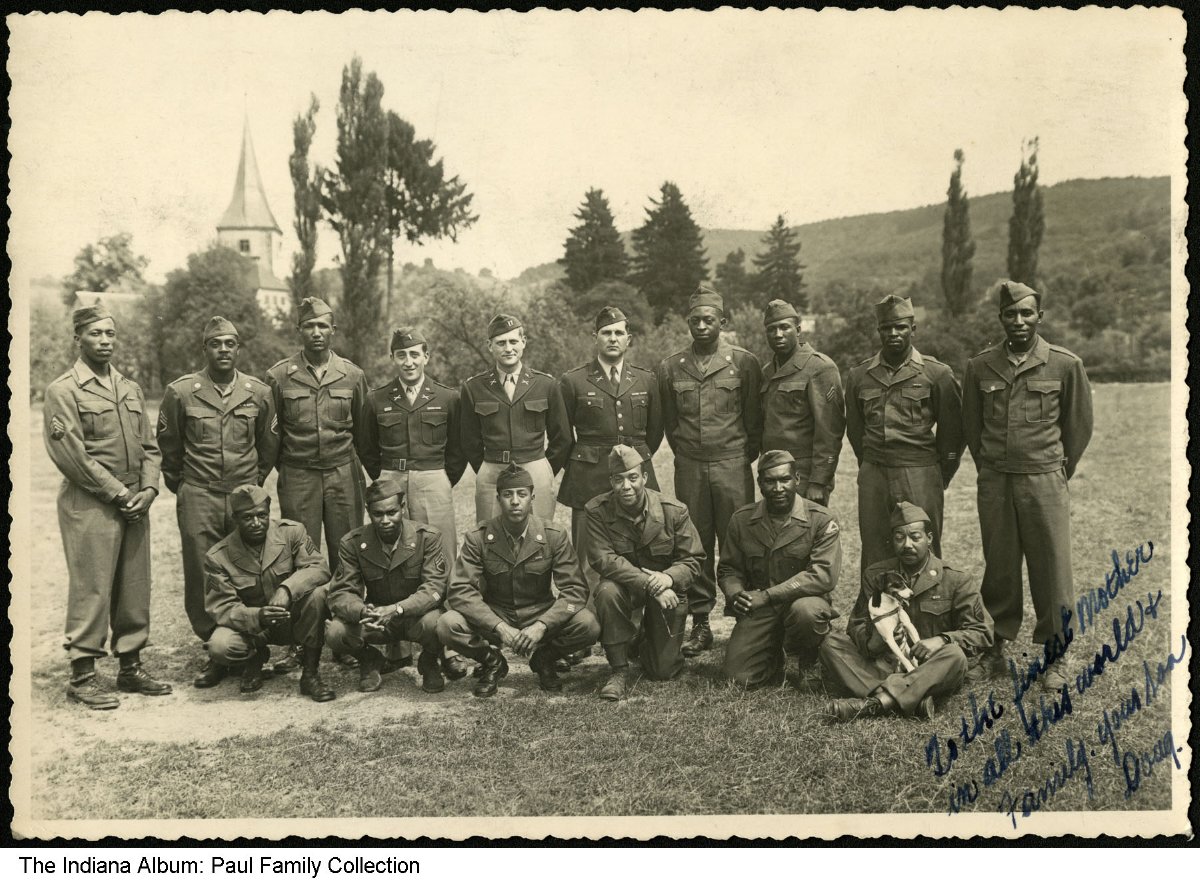 Despite the alarm bells sounded by many, the city, capital of a decidedly isolationist state and home of national war referendum sponsor Congressman Louis Ludlow, could not have fully appreciated the changes the war was to bring to its demographic, social, and physical structure, or to the lives of its citizens.

The most obvious and immediate change was the increased military presence in the city, especially at its major military installation, Fort Benjamin Harrison, a sleepy facility brought to life by rumors of war. The Induction and Reception Center, which was to become the largest in the country before being transferred to Camp Atterbury in 1944, brought many recruits to the city and spurred the expansion of the fort with numerous buildings and new acreage.

Construction at Fort Harrison completed during the war included an administration center, warehouses, firehouse, recruit buildings, 20 barracks, and an infirmary. The fort also hosted the U.S. Army Finance Center, a chaplain’s school, the Finance Replacement Training Center, and a school for cooks and bakers. Billings General Hospital, which opened in July 1941 and eventually grew to a 2,000-bed complex, became known for its rehabilitation of patients. In 1944-1945, approximately 550 German and Italian prisoners of war were housed at the fort, mainly to ease an ongoing labor shortage.

Indianapolis greatly benefited from activities at the fort, but one installation caused controversy. The Midwest Branch of the U.S. Army Disciplinary Barracks moved into the abandoned induction center buildings in 1944, eventually bringing with it 2,700 prisoners. 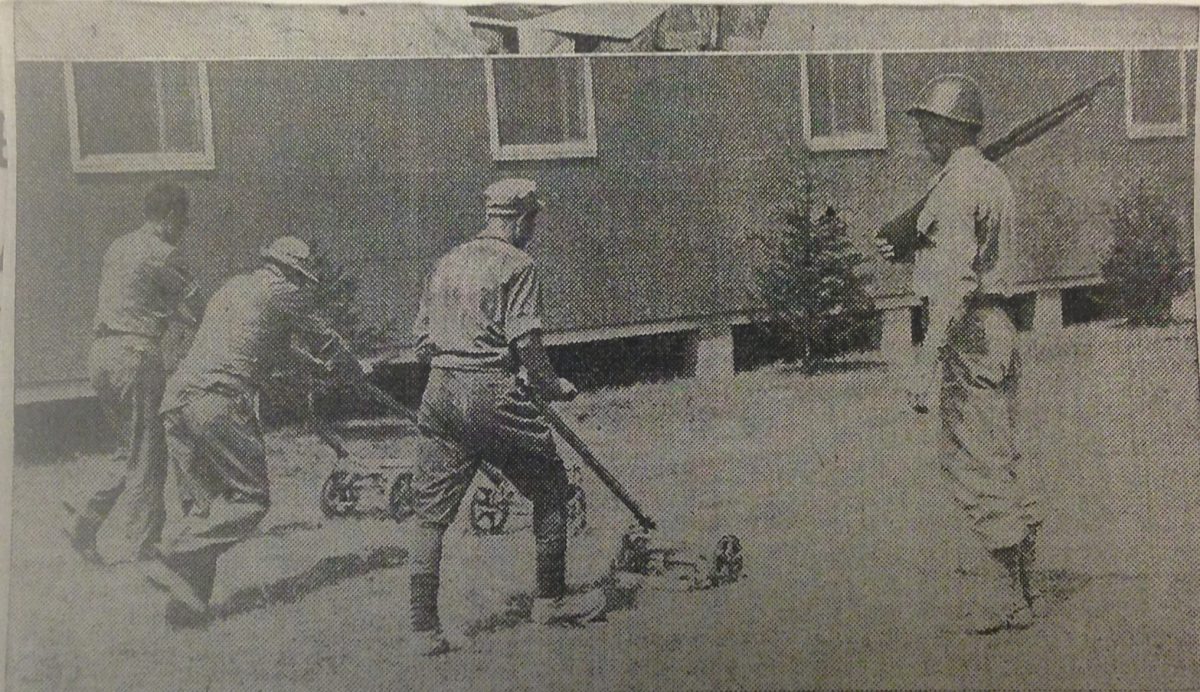 Lawn mowing was reportedly one of the most coveted jobs at Camp Atterbury amongst Italian prisoners of war.
Credit: Indiana State Library
View Source

Many citizens were unhappy with the facility’s location in Indianapolis—especially since it was adjacent to the hospital where many residents visited or worked. An inmate riot that led to the death of a fireman and guard and serious injury to others heightened their concern. Feelings quieted when a section of the disciplinary barracks was moved away from the hospital but flared anew when a civilian guard was attacked. Also, a crime wave troubling the city was blamed on escapees.

Fort Harrison was not the only military installation in the city. Stout Field, on the southwest side, was home to a troop carrier command and paratrooper training, while radio operators were taught at the Naval Armory located on the White River near Riverside Park. Two ordnance plants and specialized depots for chemical weapons and the Army Air Force also served the war effort.

Indianapolis’ central location assured that vast numbers of the military—over six million by one estimate—passed through the city during the war. Like cities everywhere, Indianapolis tried to provide as many comforts as possible; churches, civic groups, local government, and individuals sought to do something “for the boys.”

Servicemen’s centers were among the most conspicuous efforts to aid morale. The first was the Army, Navy, and Marine Service Men’s Club, which opened on May 22, 1941, in an abandoned freight house on West Wabash Street. The facility was not initially as popular as expected, primarily because women were not allowed on the premises. Attendance grew when a new director changed the rules, encouraged females to visit, and organized dances.

After Pearl Harbor, the Union Station Canteen addressed the needs of transient servicemen. Open 24 hours daily, the canteen eventually served meals to two million military personnel. Other centers opened on Illinois Street and at Christ Church Cathedral and Roberts Park Methodist Church. Although African Americans were not specifically barred from the clubs, there was a separate facility for Black servicemen on Senate Avenue. Fourteen service centers were welcoming members of the armed forces by 1943.

Support for the war effort was nearly universal, even among the more ardent isolationists. Indianapolis was quick to lend its support to many causes. There were numerous drives to collect silk, scrap metal, kitchen fat, rubber, books, and blood. Residents volunteered to work in servicemen’s clubs, firehouses, and numerous other organizations needing help.

They also gave money. Spurred on by publicity campaigns and exhortations by Hollywood celebrities, the people of Indianapolis bought a substantial share of the millions of dollars in bonds sold to Hoosiers during the eight war loan drives. Famed movie actress and Fort Wayne native Carole Lombard died in a plane crash on her return home from a bond drive which concluded in Indianapolis, an event that became part of Hollywood’s cultural memory.

The war also affected the Indianapolis economy. Like the rest of Indiana, the city was still living under the shadow of the Great Depression. Personal and manufacturing incomes, down since 1929, were driven up by the war. The most direct impetus was defense spending. By 1941, over 70 local firms accounted for $600 million in contracts, placing Indianapolis among the top ten American cities in war production. Marion County industries had received $2 billion in defense contracts by 1944.

Estimates suggested that one-third of all Hoosier wages, including Indianapolis, were tied to the war effort, ranking the state fourth in the nation. Contracts awarded to Indianapolis firms ranged from a few hundred dollars to the millions awarded to major defense contractors like Allison Transmission, which built over 70,000 aircraft engines, and Curtiss-Wright, the largest maker of propellers in the nation. Scores of smaller concerns provided gears, chains, or other needed supplies.

The downside of economic growth was inflation. A 1945 study of moderate-income families in Indianapolis showed that over 60 percent of their income was budgeted for “essentials,” a 39 percent increase over 1935 levels.

The war also changed the composition of the workforce: one-third of factory workers statewide in 1943 were women. The acceptance of other employees considered nontraditional at the time into the skilled workforce did not progress so smoothly. African Americans of both sexes were hired reluctantly by many Indianapolis industries. Although RCA hired large numbers of Black workers, gains were fewer at other important concerns like Allison, where some white workers went on strike when Black employees were put on the line. African American women found it even more difficult to move from their traditional roles into skilled jobs.

Racial prejudice remained very evident in the city. Even though everyone supported a “war for democracy,” de facto segregation existed. Still refused service by many restaurants and taxis, often relegated to the poorest housing and denied a truly open door to the workplace, African American citizens made some progress during the war, but there were not many major improvements in their condition.

Prejudice was just one of Indianapolis’s societal problems created or worsened by the war. The increase of women in the workforce created child care problems resolved with only moderate success. The influx of people drawn to jobs in the city led to a housing shortage and rent controls.

Juvenile delinquency made headlines, and citizens noted with concern the rising rates (32 percent increase between 1941-1942) of teen drinking, criminality, and sexual activity. Working mothers and absent fathers, the emotional trauma associated with the war, and overcrowding all received blame for the problem. Solutions included more supervised recreational programs; the city’s Police Athletic League, for example, began in 1943.

Overcrowding was also given as a reason Indianapolis had one of the nation’s highest tuberculosis rates (48 per 100,000 for white citizens, 150 per 100,000 for Black citizens). The venereal disease rate in the city rose so precipitously that the Army considered making the entire city off-limits to its personnel.

Indianapolis cheered lustily for the end of a war that brought good and bad to its environs. Revelers swam in the Monument Circle pool while others turned the road around it into a miniature Indianapolis Motor Speedway. Stores, city offices, and bars closed to allow celebration and reflection. The war helped make Indianapolis bigger, more modern, more industrial, more diverse, and perhaps, more cosmopolitan and open. It brought the challenge of reconverting factories to peacetime production in order to avoid factory closings and massive unemployment. It also brought problems and promises that would affect the city long into the future.

In an attempt to help alleviate the shortage of ...Read More »