Western Electric was a telephone manufacturing unit for Bell Telephone. Its predecessor obtained control of the telephone equipment factory managed by Ezra T. Gilliland, southeast of State and English avenues in Marion County, in 1881, and moved its operations to Chicago the next year. Licensed in 1879 by the Bell company to make switchboards and telephone attachments, the Gilliland factory was noted for improvements in switchboards and for experiments in mass production. The Bell Telephone Company became the American Telephone and Telegraph Company (AT&T) in 1885.

In 1948, Western Electric leased space in Speedway to train workers and began building a factory located at 2525 Shadeland Avenue on what had been farmland. The factory made telephones for AT&T Bell system’s subscribers starting in 1950. It was the world’s largest telephone factory, covering 40 acres of ground. Trips within it were made on golf carts.

During most of its history, it had one of the largest payrolls in central Indiana, about 8,000 employees. Employment numbers peaked at 9,100 in the 1960s. Hundreds of kinds of telephones were made at the Shadeland factory, the black dial telephone being the principal product. 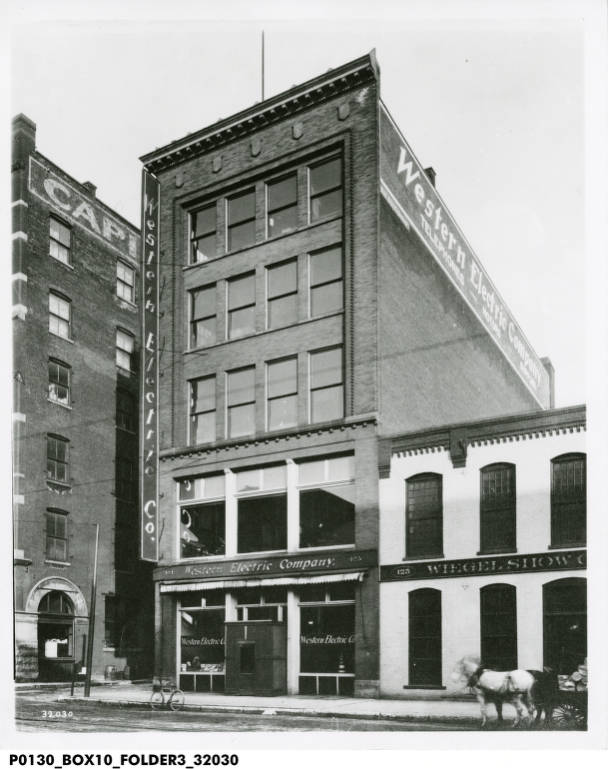 While Western Electric made over 100 types of switchboard cable, residential customers had few choices: “one black desk set, a handset, a wall set, and… black-buttoned inter-communications systems.” Specialized telephones, such as for fireboxes and coal mines, were also made there, and the building contained a testing laboratory—the Model Shop.

The Shadeland plant’s Model Shop was involved in a number of phone innovations that shifted manufacturing there to smaller models. Its engineers and designers worked with industrial designer Henry Dreyfuss and Bell Labs engineers—the company’s industrial research and scientific laboratory located in New Jersey— to create the Princess model. The new streamlined design was smaller and lighter than the old conventional black model, and it came in five different colors. The Model Shop also created the first phones with dials in the handset and the touch-tone phone.

Over time, these and other changes in telephone technology, including transistors, electronic switching, and mobile telephony/cellular systems, greatly reduced the amount of space needed to make telephones. In 1978, The Federal Communications Commission (FCC) set aside frequencies for mobile communications, and AT&T began operation of its “Advanced Mobile Phone Service” in Chicago in 1983.

At the same time, the demand for the Indianapolis plant’s chief product, the residential phone, declined. Between 1970 and 1982, unit production at the plant fell from a total of $5.7 to $4.3 million. In an effort to retool the plant for other purposes, Western Electric introduced a $14 million high-technology unit at the Shadeland Plant in 1982 to manufacture hybrid integrated circuits.

These new innovations also made it increasingly difficult to defend AT&T’s complete control of the telephone business. The U.S. Justice Department began antitrust proceedings against AT&T in 1974, which at the time was the largest corporation in the world. In addition to divesting its 22 wholly owned operating companies that provided local exchange service, in 1983, AT&T was ordered to abandon the Western Electric name. It also forfeited the use of the name Bell and its well-recognized logo.

In September 1983, plans were announced to close the Shadeland Western Electric factory, with officials citing increased foreign competition and the imminent breakup of AT&T as causes. Initially, about half of the employees were laid off. Production ended in 1985.

Other units of AT&T succeeded to Western Electric’s properties following the company’s court-ordered divestiture on January 1, 1984. Empty for some years, the factory eventually became an industrial rental property—Western Select (now known as Western Select Properties)—but many areas remained without tenants.