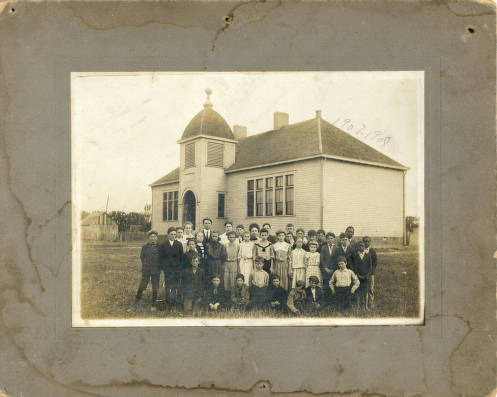 Transportation routes determined the location of township communities. Bridgeport was founded in 1830 at the site of a tollhouse along the National Road (now U.S. 40). Farther east along the road, the village of Mount Jackson sprang up where a public house opened in 1837.

Railroad developments from 1850 to 1880 spurred the growth of several hamlets. Clermont was platted in 1849 as a stop on the Indiana, Bloomington, and Western Railroad, while Ben Davis resulted when residents successfully lobbied a Vandalia Railroad superintendent of that name for a depot in 1877.

The Belt Line Railroad on the westside of White River facilitated the location of stockyards and industry, including the foundry of Benjamin Haugh in 1880. Foundry workers, many of them from eastern Europe, settled the town of Haughville. On the southern edge of Wayne Township, a gristmill operation, originally called Beeler’s Station, attracted workers and craftsmen. In 1873, the village was platted as Maywood on the Vincennes Railroad. By 1880, the township and its growing communities counted about 4,800 residents.

In the 20th century, new forms of transportation brought commercial and residential growth. The town of Speedway, platted in 1912, developed adjacent to the racetrack built to test and race automobiles. The aviation industry also played an important role in the development of Wayne Township. In 1931, the Indianapolis Municipal Airport opened, though it was renamed Weir Cook Municipal Airport (after a World War I flying ace) in 1944 and later became Indianapolis International Airport. Nearby acreage was then developed for hotels, the Park Fletcher office park, and industrial facilities.

During and after World War II, communities such as Lynhurst (1941) and Eagledale (1955) emerged as commuter suburbs for working-class families. Beginning in the 1960s, homes, and businesses flanked Interstates 70, 74, and 465.

The airport was one of the township’s major employers in the 1990s, along with Olin Brass, Allison Divisions Of General Motors, Reilly Tar & Chemical (Vertellus since 2006), Chrysler, and the Indianapolis Motor Speedway.

A new United Airlines Indianapolis Maintenance Center opened in 1994 and employed a large workforce until it closed in 2003. Since its opening in 1988, the Indianapolis FedEx Hub at Indianapolis International Airport has grown to become the second-largest in the nation, with 4,000 employees.

In 2008, a new Indianapolis International Airport opened with much fanfare. The township also lost industrial employers in the 2000s. Olin Brass closed in 2002, and the Chrysler Indianapolis foundry closed in 2005.

The Metropolitan School District of Wayne Township remained separate from the indianapolis public schools with the 1970 Unigov city-county consolidation. Pupils from Indianapolis Public Schools have been bused to the area since 1981 when 1,400 students were reassigned in a court-ordered desegregation plan.

Wayne Township The township is located on the west side of Indianapolis.