The Indiana Constitution provides for the existence of townships, and successive state laws have instituted township government and its officers. Within each county the Board of County Commissioners may create or abolish townships and their boundaries upon the petition of a majority of its citizens. 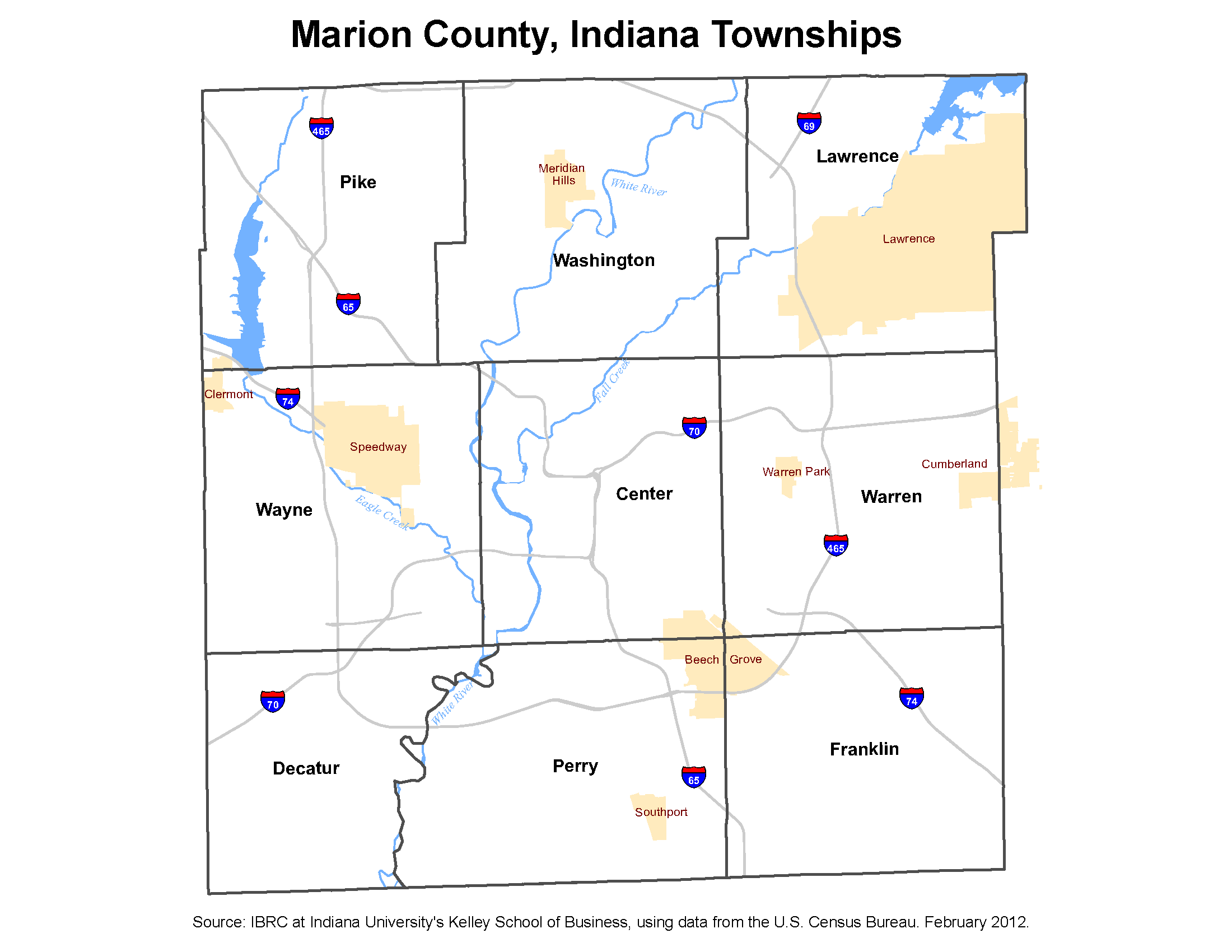 There are nine townships in Marion County: the northern tier consists of Pike, Washington, and Lawrence townships; Wayne, Center, and Warren townships make up the middle tier; and the southern tier includes Decatur, Perry, and Franklin townships. (See separate entries on individual townships.) Center Township, which contains most of the pre-Unigov City of Indianapolis, has the largest population, the lowest income per capita, and the highest total property value in Marion County.

Each Marion County township elects its own trustee, board, assessor, and a constable and small claims court judge. Officers serve four-year terms, not to exceed eight consecutive years. Residence in the township is the only qualification for any office. Township officers’ salaries are based upon a combination of population and geographic size. Elected township officers have the power to appoint and hire deputies and employees to help them fulfill their responsibilities.

Also, the trustees in Decatur, Pike, and Wayne townships provide emergency and fire protection. In Center Township the Indianapolis Fire Department provides emergency and fire protection. Starting in 2007, the other townships merged their fire departments with IFD. This merger commenced with the Indy Works consolidation initiative of the Mayoral Administration Of Bart Peterson. The trustee can assess taxes or levy bonds for these purposes. Additionally, he/she must prepare the township budget as well as present an annual financial report to the State Board of Accounts for review.

A three-member Township Board advises the trustee in each township. At the board’s two annual meetings and any necessary special meetings, it adopts the annual budget, approves township contracts, and sets tax rates and township employee salaries.

Since all the Marion County townships have a population over 5,000 each has an assessor who establishes the value of real and personal property for tax purposes. As of the early 1990s, the assessors in Marion County are paid by the county and work under the direct supervision of the county assessor to promote intra-county uniformity.

Since the 1930s, critics of township government have repeatedly attempted to abolish such governments statewide by merging them into county or municipal governments. As a result, some township duties have been reallocated, especially in Marion County where the combined Indianapolis-Marion County government provides myriad services. Township trustees statewide have been relieved of responsibility for schools, roads, and bridges, and their welfare functions have been reduced to providing only immediate emergency relief.

In Marion County, the county assessor hires professionals to conduct most of the townships’ property reassessment. In 1992 the Department Of Metropolitan Development of Indianapolis assigned each township an administrator to act as a liaison between Indianapolis government and residents who have problems with city services.

The most recent attempt to pass legislation that would dissolve township boards in Indiana failed to pass through the House when brought to vote February 12, 2019. House Bill 1650 authored by Batesville Republican Representative Cindy Ziemke would have cut spending and streamlined government by keeping the township trustee position but dissolving all advisory boards.

Throughout the 20th-century and beyond, township officials have been criticized for abuse, nepotism, lack of accountability, and inefficiency. Several Center Township trustees have been charged with overspending and incompetence, although state laws governing welfare relief mandate certain services and thus constrain trustees’ ability to control their expenditures. Additionally, a 1993 probe by the U.S. district attorney found that Marion County constables often charged unlawful fees for tenant eviction, making several constables the highest-paid officials in the state.