The Indianapolis Recorder is a weekly newspaper that has been published since 1895. It is the nation’s fourth-oldest surviving African American newspaper, and the longest continuously operated Black publication in Indiana. Recurring sections include news, opinion, health, business, religion, sports, education, and the popular “Around Town” entertainment section.

The Recorder was launched as a two-page church directory by print shop owner George P. Stewart and attorney William Porter. Coverage included church news, local announcements, and other topics of interest to Black churches, fraternities, sororities, and social clubs. In 1897, the publication expanded to four pages and adopted the Recorder name. Rapid growth of the Black community in Indianapolis and other Indiana cities led to greater demand for news. The Recorder met this demand by providing more coverage of general news, politics, religious news, and social matters.

By 1899, circulation numbered more than 20,000. Porter sold his interest in the Recorder to Stewart, who became the sole owner. Stewart moved the Recorder from its original location at 122 West New York Street to 414 Indiana Avenue in the heart of the Black business district.

The Recorder grew to eight pages in 1912 and strongly promoted Black businesses. Stewart encouraged African Americans to strive for economic prosperity by building their own enterprises. Editorials were also written to promote racial equality and support political candidates who opposed the Ku Klux Klan.

This opposition prompted acts of vandalism against the Recorder offices and threats of violence toward its journalists, especially during the 1920s when the Ku Klux Klan reached its height in Indiana. However, the Recorder refused to be intimidated and continued its fight for racial justice. 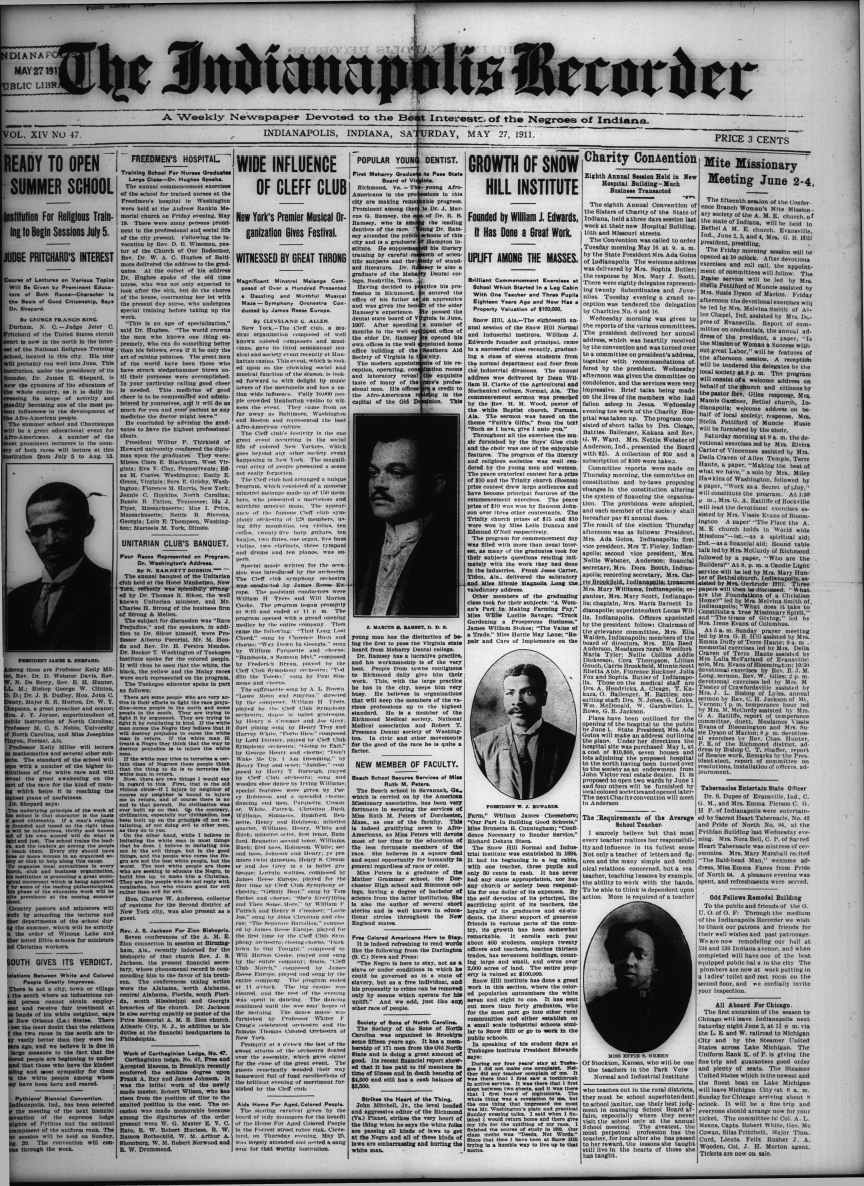 George P. Stewart died in 1924. He was succeeded as publisher and owner by his wife Fannie and as managing editor by their son Marcus C. Stewart, who led the Recorder with various family members until his death in 1983. Under the younger Stewart’s leadership, The Recorder continued to expand with more pages and special sections. It also helped readers find relief during the Great Depression in the 1930s, as well as natural disasters such as massive floods.

During World War II, the newspaper covered African American contributions to the Allied war effort. In July of 1945, the Recorder released its “Victory-Progress” special edition. With 92 pages, it celebrated the ending of the war as well as the historical achievements of African-Americans. Other topics of the era included efforts by the National Association for the Advancement of Colored People (NAACP)  to integrate the United States armed services, as well as the heroic success of the Tuskegee Airmen. Circulation reached more than 40,000.

Throughout the 1950s and 1960s, the Recorder strongly supported the civil rights movement by pushing for legislation to end racial discrimination in employment, education, housing, and public accommodations. Reporting was provided on the work of national African American leaders such as Martin Luther King Jr. and Malcolm X, as well as local Black ministers, elected officials, and civic leaders. It was during this period that William Raspberry worked for the Recorder before he achieved national prominence as a Pulitzer-Prize–winning journalist for the Washington Post.

In 1975, the Recorder moved to a larger building in the predominantly Black Martindale-Brightwood area. During the 1970s and 1980s, the Recorder held personal significance for families who participated in numerous community events sponsored by the newspaper. They also enjoyed seeing people they knew in coverage of local church activities, marriages, and social events. In 1988, the Stewart family sold the controlling interest of the Recorder to Eunice Trotter, a longtime Indianapolis journalist and experienced manager.

Under Trotter’s ownership, the sections of the newspaper were reorganized and computers became more prominent in production. Trotter also introduced a new management style and the landmark Journalism and Writing Seminars (JAWS) program, which provides high school students with hands-on training and prepares them for a successful career in journalism. Still, the Recorder continued to experience difficulties. In 1990, Trotter sold the newspaper to William G. (Bill) Mays, an Indianapolis chemical company executive and African American civic leader.

With Mays as publisher, circulation increased by 40 percent and advertising revenue doubled. Mays used his respected stature across the country to draw more attention and prestige to the Recorder, especially through increased corporate advertising. Modern equipment was brought into the production process.

Mays also made financial contributions and expanded the staff. He and Charles Blair, the vice president and general manager, shifted the Recorder’s front page focus from sensational news about crime to more positive aspects of the Black community. However, The Recorder faced new challenges as the 21st century dawned.

In 1998, Mays asked his niece, Carolene Mays-Medley, to become the Recorder’s new president and general manager. Under her leadership, the publication eliminated its debt and became profitable. Structural upgrades were made to the building’s exterior, and the interior was remodeled. Mays-Medley built a new team of experienced editors, reporters, and graphic designers who enhanced the Recorder‘s editorial content and appearance. Each full-color section was updated. Popular columnists such as Amos Brown and Bishop T. Garrott Benjamin Jr. kept readers looking forward to new issues. Circulation increased from 2,000 to approximately 22,000 during Mays-Medley’s tenure.

In 2000, The Recorder received the prestigious Indiana Journalism Award. Over the next two decades, it won numerous awards for journalistic excellence from national organizations such as the National Newspaper Publishers Association (NNPA) and the Society of Professional Journalists (SPJ).

In May of 2007, the Recorder acquired Indiana Minority Business Magazine, a statewide quarterly publication focused on business, lifestyle, and diversity news. Business analysts described the purchase as a wise decision that led to larger audiences for both publications.

Within a month of the acquisition, the Recorder unveiled the revamped Indiana Minority Business Magazine during Indiana Black Expo’s 37th annual Summer Celebration at the Indiana Convention Center. More than 35,000 copies were distributed.

Williams developed the Recorder Advisory Council, a group of local leaders and regular citizens who provided strategic advice, helping the Recorder stay relevant to the concerns of readers. Williams also worked closely with the editorial and production staff to craft content that was compelling and useful to readers. The Recorder also increased efforts to attract younger readers, along with the use of electronic media such as its website and social media platforms like Facebook, Twitter, and Instagram.

In 2011, the Recorder became the first African American newspaper to offer a digital collection of its articles. Digital versions of historic articles from 1899 to 2005 were made available online through a partnership with Indiana University-Purdue University Indianapolis (IUPUI). It quickly became a popular source for academic researchers, genealogists, and journalists. The archive later became available on the Hoosier State Chronicles, a free collection of local newspapers dating to 1804.

Robert Shegog became president and chief operating officer in 2018. He and a revamped staff amplified the Recorder’s community engagement strategies. With Shegog at the helm, the Recorder has embraced the latest information technology while also upholding the newspaper’s historic mission of “preparing a conscious community today and beyond.”

Indianapolis Recorder The paper operates out of a building located at 2901 North Tacoma Avenue.