In 1984, the United States Olympic Committee (USOC) urged Indianapolis to bid for the Tenth Pan American Games, a celebration of sport, competition, and international friendship for athletes from nations of the Americas in the Western Hemisphere. Two previously selected host cities—Santiago, Chile, and Quito, Ecuador—had relinquished their duties due to economic and/or political issues. The Pan American Sports Organization (Panam Sports/PASO), an affiliate of the International Olympic Committee, held the games every summer preceding the Olympics since 1951. While Indianapolis leaders originally planned to bid on the Eleventh Pan American Games, scheduled for 1991, they agreed to the earlier event set for 1987.

Selection of Indianapolis as Host City

At the request of the USOC, Mayor William H. Hudnut Iii led a delegation of Indianapolis leaders to Mexico City in November 1984 to present the city’s bid to PASO president Mario Vazquez Rana. The following month, PASO announced its selection of Indianapolis as the host city for the Tenth Pan American Games.

Several factors weighed heavily in favor of Indianapolis. First, the city had prior experience hosting national and international sports events, including National Sports Festival Iv in 1982. In addition, more than $136 million worth of first-class sports facilities were already in place throughout the city, which meant little construction would be needed to prepare for the Games. Finally, Indianapolis served as the headquarters for the Amateur Athletic Union and several national Amateur Sports Governing Bodies. Many athletes from these groups would be participating in the upcoming Games.

While host cities normally have five to six years to organize the Pan American Games, the circumstances surrounding Indianapolis’ selection meant the city only had two and a half years to prepare.

In January 1985, Pan American Games X/Indianapolis (PAX/I, pronounced paxee) was formed by Indiana Sports Corporation to serve as the local organizing committee for the 1987 Games. Established as a not-for-profit, PAX/I consisted of a 17-member Executive Committee overseeing eighteen operational divisions. While PAX/I had some paid staff, the majority of the organizing committee’s members, including within the operational divisions, were volunteers.

Financing of the Games

Official Symbol and Mascot of the Games

Designed by J. Michael Hayes of Indianapolis-based JMH Corporation, the official symbol of the Tenth Pan American Games consisted of a series of overlapping Roman numeral tens (“X”). This symbol served as a major identifier of the Games and appeared on a variety of event-related items, including promotional materials, apparel, and souvenirs.

Another important identifier was the Games’ official mascot “Amigo the Pan Am Parrot.” This character, often shortened to “Amigo” (which means “friend” in Spanish), was created by the design team of Jerry Reynolds and Russ Harris of Indianapolis-based Perennial Pictures. In the two years leading up to the festivities, Amigo traveled throughout Indiana as the Games’ principal goodwill ambassador.

Together, these groups held more than 200 events during the festivities that covered numerous artistic disciplines, such as music, theatre, dance, literature, visual arts, media arts, and design arts. The official sponsors of the festival were the Indianapolis Foundation and Target Corporation.

On August 8, 1987, approximately 80,000 spectators converged at the Indianapolis Motor Speedway to see the opening ceremony for the Tenth Pan American Games, which proved to be the largest outdoor live entertainment show ever staged in the United States at the time. Produced by Walt Disney World Productions, this event involved more than 6,500 volunteer performers with an additional 23,000 volunteers used for the program’s card stunts.

Media coverage of the 1987 Games included both televised and printed content. CBS broadcast 26 hours of the event on three successive weekends. In addition, 2,100 journalists representing 628 news organizations from 36 nations covered the action.

On August 23, 1987, the Tenth Pan American Games concluded with the closing ceremony at the Hoosier Dome. In addition to recognizing the completion of 16 days of competition, this event also involved the symbolic passing of the Games from Indianapolis to Havana, Cuba, the selected host city for the Eleventh Pan American Games in 1991. Cuban American artist Gloria Estefan performed with the Miami Sound Machine as the headlining act of the night.

Controversies at the Games

Four years prior, at the 1983 Pan American Games in Caracas, Venezuela, nineteen athletes from ten countries were stripped of medals and records in what was one of the biggest drug crackdowns of international sports. Another twelve athletes left those games without ever competing.

For the 1987 Pan American Games, an Indiana University laboratory in Indianapolis, only the third lab in North America approved by the IOC, was used for doping control during the event. Pharmaceutical services provided by volunteers included more than 100 pharmacists recruited from local Indianapolis hospitals with the responsibility for doping control and operation of the medical clinic pharmacy at the Games.

A total of 981 athletes were tested during the Games. Six athletes, including three medal winners, were disqualified after positive test results.

In all, the 1987 Pan American Games provided a unique opportunity for pharmacists to assist in providing medical services at a large athletic event and to become involved in doping control. 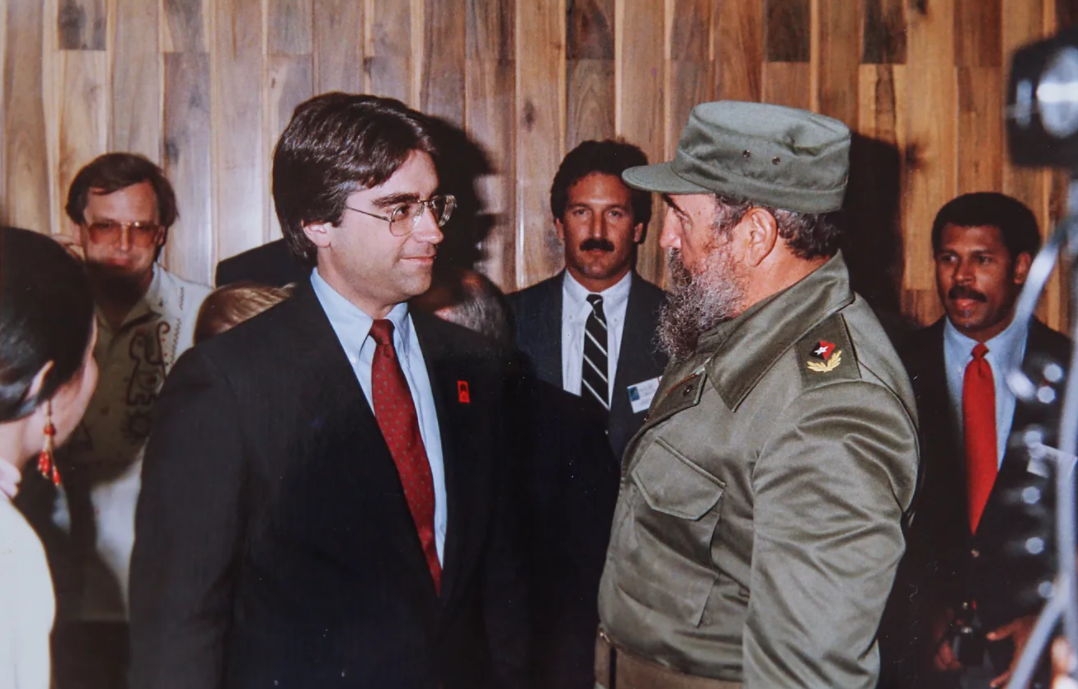 After boycotting the 1984 Summer Olympics in Los Angeles, Cuba agreed to compete in the 1987 Pan American Games in Indianapolis. This decision was the result of an agreement between Fidel Castro and PASO that awarded the 1991 Games to Havana in exchange for the country’s participation in Indianapolis. The agreement came about after a PAX/I contingent traveled to Cuba, meeting Castro around midnight at the Palace de la Revolucion on the eve of the contingent’s return to the U.S. After a nearly three and one-half hour monologue about baseball rather than boycotts, Castro laid out the conditions under which Cuba would participate in the Indianapolis-hosted games. At the end of the Spanish-spoken soliloquy, Castro demanded Cuba host the 1991 Pan American Games and signed three baseballs for the PAX/I contingent.

Given Cuba’s contentious history with the United States, its participation in the Tenth Pan American Games led to numerous controversies:

Anti-Castro Cuban American activists used the Games as a way to confront the Castro regime, using the Cuban delegation of athletes as the proxy. These activists urged the Cuban athletes to defect during the opening ceremony and later harassed the Cuban baseball team and a Cuban boxer at their respective sporting events.

Additional disputes involved the closing ceremony. While the Indiana World War Memorial Mall was originally selected to host this event, American Legion officials objected to raising Cuba’s flag or playing its national anthem in recognition of the country’s status as host of the upcoming 1991 Games. As a result of this decision, the closing ceremony was relocated to the Hoosier Dome.

According to a study by Indiana University, the Tenth Pan American Games added about $175 million to Indianapolis’ economy. In addition, the city earned the distinction of being the first Pan American Games host city to break even financially.

Beyond the financial achievements, the 1987 Games served as the culmination of Indianapolis’ sports initiative. This initiative was part of a larger Downtown Development effort started in the late 1960s.

Twenty-five years after the Tenth Pan American Games were held, Indianapolis hosted Super Bowl Xlvi in 2012. Many local leaders cited the city’s prior experience with the 1987 Games as one of the reasons Indianapolis was able to land the National Football Leagues championship game, which is one of the nation’s largest sporting and cultural events.