Harry C. Stutz (1876 -1935) moved from his native Ohio to Indianapolis in 1903. By 1910, the Stutz Auto Parts Company manufactured rear-axle-mounted transmissions. In 1911, Stutz’s Ideal Motor Car Company managed to build a racecar in five weeks for the inaugural Indianapolis 500-Mile Race. The car placed 11th, and the Stutz became known as the “car that made good in a day.”

The famous Bearcat first appeared in 1912. Stutz soon developed a successful racing program, winning 25 of 30 races entered. He then organized the Stutz Motor Car Company in May 1913 through the merger of the Stutz Auto Parts and Ideal Motor Car companies. The company’s factory opened at 10th Street and Capitol Avenue in 1914. 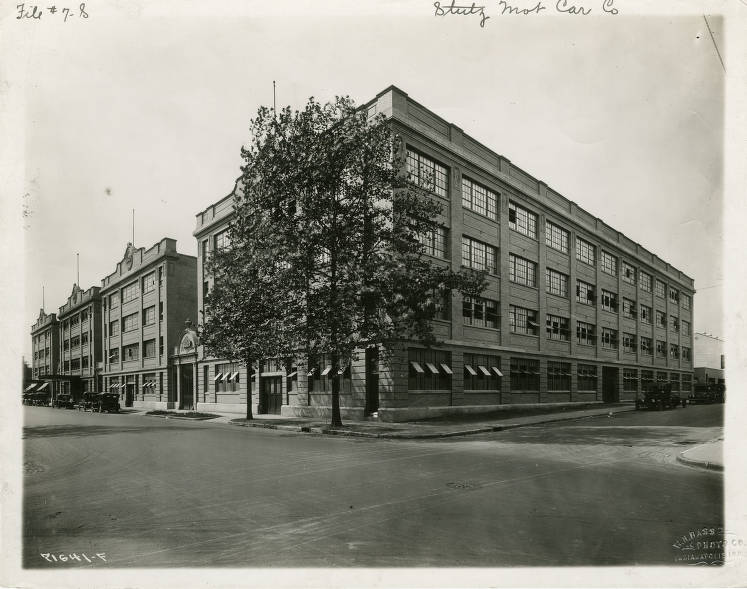 In 1915, Erwin George “Cannonball” Baker broke the coast-to-coast auto-driving record in a Bearcat, driving from New York to San Diego in 11 days, 7 hours, and 15 minutes. Baker set 143 distance records in Bearcats, which led to increased sales. In 1916, the financier Alan A. Ryan took control of the company after it had gone public. The number of cars produced increased to 2,207 in 1917. The company’s successes led to the building of a factory complex (1914-1920) at 1008 North Capitol Avenue. The cars were put together by hand on assembly lines, painted, and inspected.

The Stutz racing team attempted to set a new land speed record in 1928. Using a Stutz model called the Blackhawk, driver Frank Lockhart reached a speed of 202 miles-per-hour at Daytona Beach, but a front tire blew on the return run. The car crashed into the Atlantic Ocean, and Lockhart was killed. The attempt was the last effort of the team. It never raced or tried to break any speed record again.

Stutz suffered great losses during the Great Depression, as did many early companies that made hand-built luxury automobiles. With the production of the Pak-Age-Car, an early small walk-in delivery van, the company attempted to revive the business. The company, however, failed and closed in 1937.

Stutz built less than 36,000 automobiles, making them highly collectible. As one of the earliest true sports cars, the 1912-1916 Stutz Bearcat models have the highest value.

In 1940, Eli Lilly And Company purchased the Stutz factory buildings to establish its “Creative Packaging” division. The pharmaceutical company’s packaging division remained until 1982.

After being vacant for a decade, Turner Woodard, an Indianapolis adaptive-reuse developer and Stutz collector, purchased the Stutz building and remade it into the Stutz Business and Art Center.  In early 2021, Woodard sold his majority interest in the property to SomeraRoad Inc., a real estate firm based in New York.

The Stutz Business and Art Center began as the ...Read More »

During the 10 months preceding the stock market crash in ...Read More »

There have been six official residences for Indiana’s ...Read More »