Rev. Vincent Bacquelin, an itinerant priest who split his time between Indianapolis and two other central Indiana parishes, founded the forerunner of St. John the Evangelist Catholic Church in November 1837. After holding services in rented rooms for the first three years, the parish built the Church of the Holy Cross in 1840. This small, 40-by-24-foot frame structure on the northside of Washington Street between West and California streets served the city’s approximately 200 Catholics. Originally, the parish included all of Marion County. 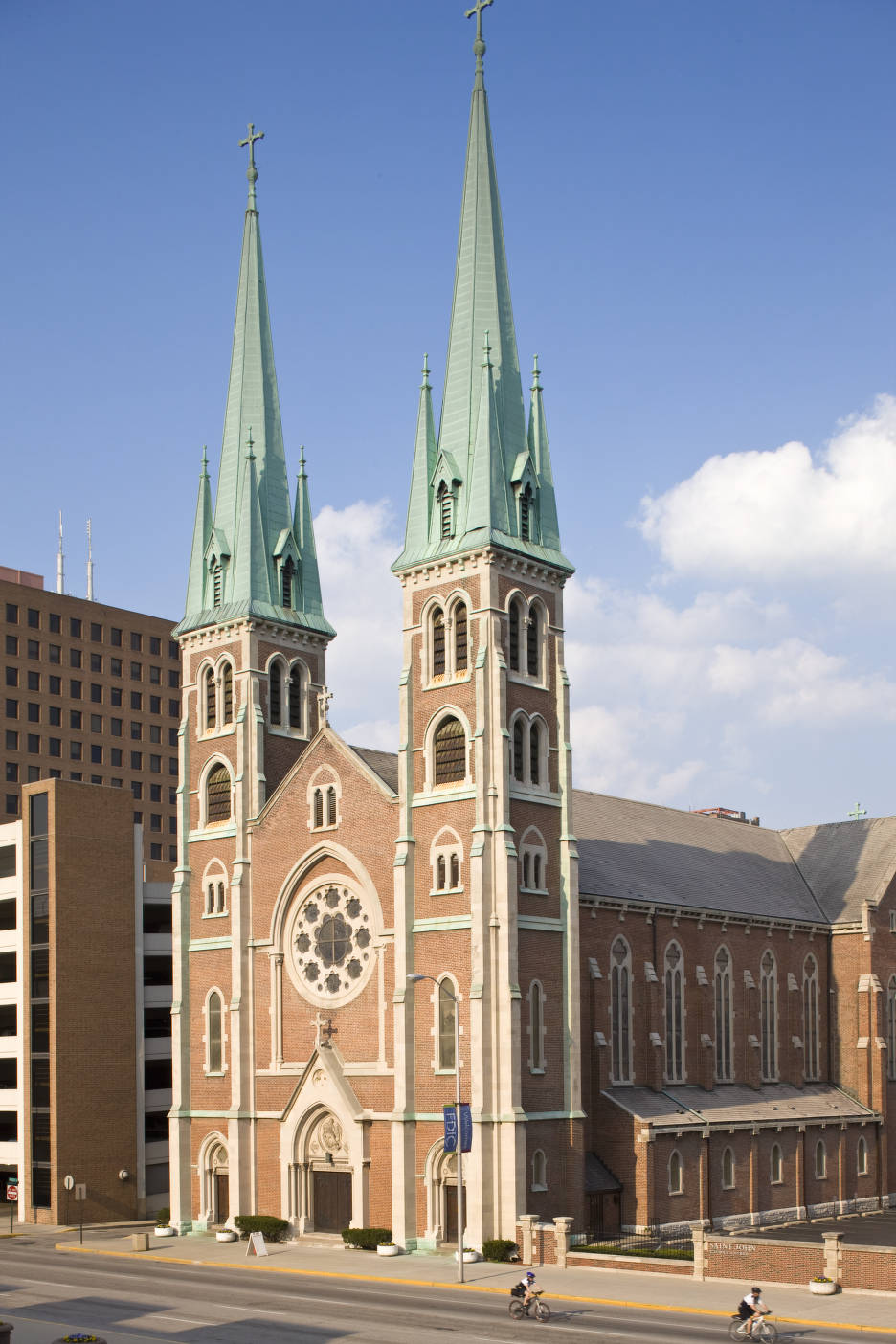 To accommodate the influx of Catholics into the city, a new 40-by-80-foot brick church was built in 1850 on the site of the present structure at 126 West Georgia Street. The church was renamed St. John the Evangelist after the patron saint of the priest then serving the parish. Seven years later, the building was enlarged to serve the growing congregation.

The present church building, begun in 1867, was completed in 1871. Designed by architect Diedrich A. Bohlen, it drew from several periods and styles. Due to limited funds, embellishments such as the two spires and the stained glass windows were not added until 1893. The building was placed on the National Register of Historic Places in 1980.

From 1871 to 1907, as the first Catholic church established in Indianapolis, St. John served as the pro-cathedral (temporary cathedral) for the city, which was then part of the Diocese of Vincennes, founded in 1834. At the beginning of the 20th century, St. John’s congregation numbered about 900 families. Within 15 years, the population of the parish began to dwindle as factories and warehouses replaced neighborhood homes, driving many parish residents to other areas of the city. The church began serving primarily transients and people staying in downtown hotels. By 1940, St. John’s membership had dropped to around 500 parishioners. In 1959, city planners discussed demolishing the church to make way for a civic auditorium but soon dropped the idea. The parish continued to shrink during the next decade, declining to 136 parishioners by 1968.

Although Ss. Peter And Paul Cathedral became the official cathedral of the newly established Diocese of Indianapolis when it was built in 1906, St. John served as the diocesan Chancery, which handles all of the written documents used to govern the Catholic church, until 1968. It remained the seat of the Metropolitan Tribunal, the ecclesiastical court (dealing primarily with the validity of marriage), until 1982. At that point, all Archdiocesan offices moved into the original Cathedral High School building at 14th and Meridian streets, across from SS. Peter and Paul Cathedral.

A congregation of women inside St. Johns Church during a radio broadcast of services, 1942
Credit: Indiana Historical Society
View Source

The restoration of St. John to mark its centennial in 1971 spurred renewed interest in the church. The downtown congregation also has benefited from its proximity to the Indiana Convention Center and Lucas Oil Stadium, drawing many tourists and conventioneers to services. Because of its proximity to Lucas Oil Stadium, the church even has offered seasonal parking passes for Indianapolis Colts games.

In 2009, Archbishop Daniel Buechlein made St. John a parish hub for young adult ministry. He brought Father Rick Nagel to the church, who not only serves as its pastor but also as campus chaplain for Indiana University-Purdue University Indianapolis (IUPUI). As of 2020, the parish included a diverse group of members from traditional parishioners to the homeless.