Established in 1856 as the second Roman Catholic parish in Indianapolis, St. Mary of the Immaculate Conception was originally the spiritual home of German Catholics in the city. 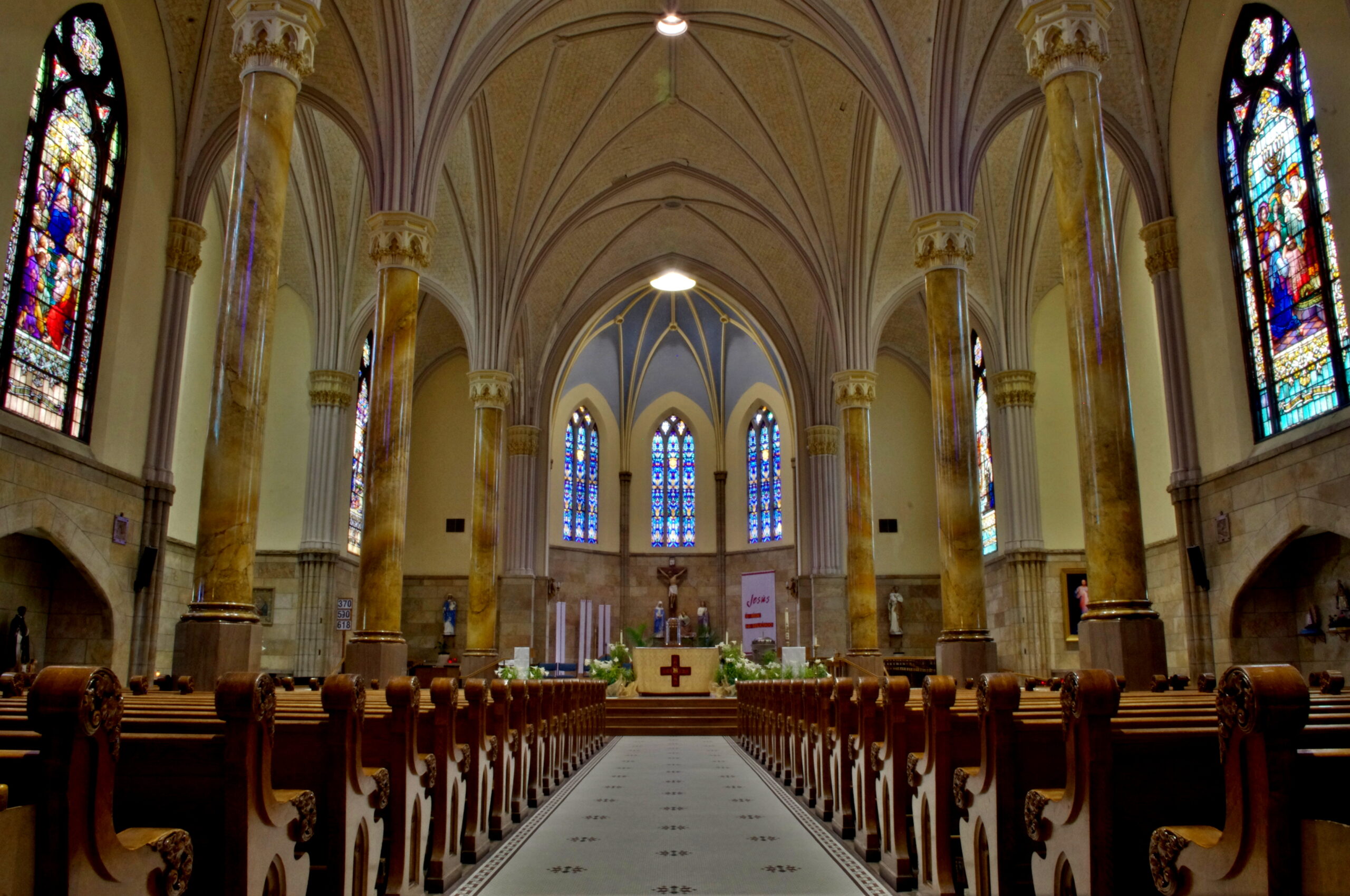 The parish of St. John was the mother church of Roman Catholicism in Indianapolis, and Catholics of all backgrounds initially worshipped together there. However, as German immigrants flocked to Indianapolis in the early 1850s, diocesan officials saw fit to establish a parish for them. Tensions with the immigrant Irish Community were chief among the reasons for establishing St. Mary. Danes also settled in the area after 1867. Following the unification of Italy, immigrant Italians. Catholics began to worship at St. Mary in the mid-1870s.

On August 30, 1857, Bishop Jacques-Maurice des Landes d’Aussac de St. Palais, a French-born priest who served as bishop of Vincennes from 1848 to 1877, dedicated the first church constructed at the corner of Maryland and Pennsylvania streets. Rev. Simon Siegrist, the parish’s first pastor, and Msgr. Auguste Bessonies, another French-born priest who served as vicar general of the diocese, celebrated the first Mass in the church on August 15, 1858. The original St. Mary building was modified Gothic Revival in style, with a single steeple. A rectory and parish school accompanied it on its lot. The school commenced operations for the 1858 school year, and the Sisters of Providence staffed it starting in 1860.

As more German immigrants arrived in Indianapolis during German chancellor Otto von Bismarck’s anti-Catholic Kulturkampf in the 1870s, St. Mary began to experience overcrowding. Many of the Germans lived on the city’s southside, so Bishop St. Palais agreed to allow a community of Franciscans to establish Sacred Heart parish at the corner of Union and Palmer streets.

The neighborhood surrounding old St. Mary shifted, and many of the parishioners moved north into the Lockerbie Square neighborhood as they became more established and affluent. The Methodists founded a mission for Italian immigrants in the area, and by 1910 Italians overwhelmingly had replaced the original residents. Attending church became inconvenient for the Germans who had moved north, and St. Mary also became overcrowded. The diocese decided to move St. Mary and established Holy Rosary-Danish Church for its Italian parishioners. St. Mary moved to its location at New Jersey and Vermont streets in 1911.

Hermann Gaul, a German-born Chicago-based architect, designed the New Jersey street church, inspired by the Cologne Cathedral. Construction on the Gothic Revival structure lasted from 1910 to 1912. The interior originally reflected the grand Gothic Revival style of the exterior, but subsequent renovations in the 1950s, the 1970s, and 1997 incorporated simpler, more modern design choices, including the removal of the ornate high altars and communion rails.

Shortly after the New Jersey street building was dedicated, World War I erupted, and anti-German sentiment took hold. As the German parish in Indianapolis, declining attendance and shrinking income impacted St. Mary. This trend continued after World War II as parishioners moved out of the city’s downtown and into the suburbs.

In the latter part of the 20th century, the neighborhood surrounding St. Mary changed. Hispanic immigrants began moving to the area. As of 2020, St. Mary served as the center of the Archdiocesan Hispanic Apostolate, which ministers to the spiritual needs of Spanish-speaking Catholics in the city. It held four weekend Masses and daily Mass in English and Spanish.