(Dec. 6, 1971-Apr. 8, 1990). Ryan White, then a middle school student living near Kokomo, Indiana, contracted HIV (Human Immunodeficieny Virus) at age 12 through a blood transfusion for hemophilia and later acquired AIDS (Acquired Immune Deficiency Syndrome). After his diagnosis at Riley Hospital For Children in Indianapolis in late 1984, the local school superintendent banned White from attending classes. Ryan and his mother, Jeanne White, successfully appealed to the Indiana Department of Education, and Ryan’s return to school in February 1986 was a national media event, making him a spokesperson for HIV victims’ rights. Continuing discrimination, however, caused the Whites to move to Cicero, Hamilton County, Indiana, in 1987.

After the move, White attended Hamilton Heights High School and began his crusade to educate the public about HIV and AIDS. In September 1987, he promoted the establishment of the Ryan White National Fund, a fundraising program for the prevention of discrimination against children with HIV. The following year, Ryan testified before the White House AIDS Commission and gave a cover story interview about life with HIV to People magazine. He was also nominated for an Emmy for an AIDS segment on the public television program “3-2-1 Contact.” The Ryan White Story, a 1989 television movie, portrayed White’s struggles. 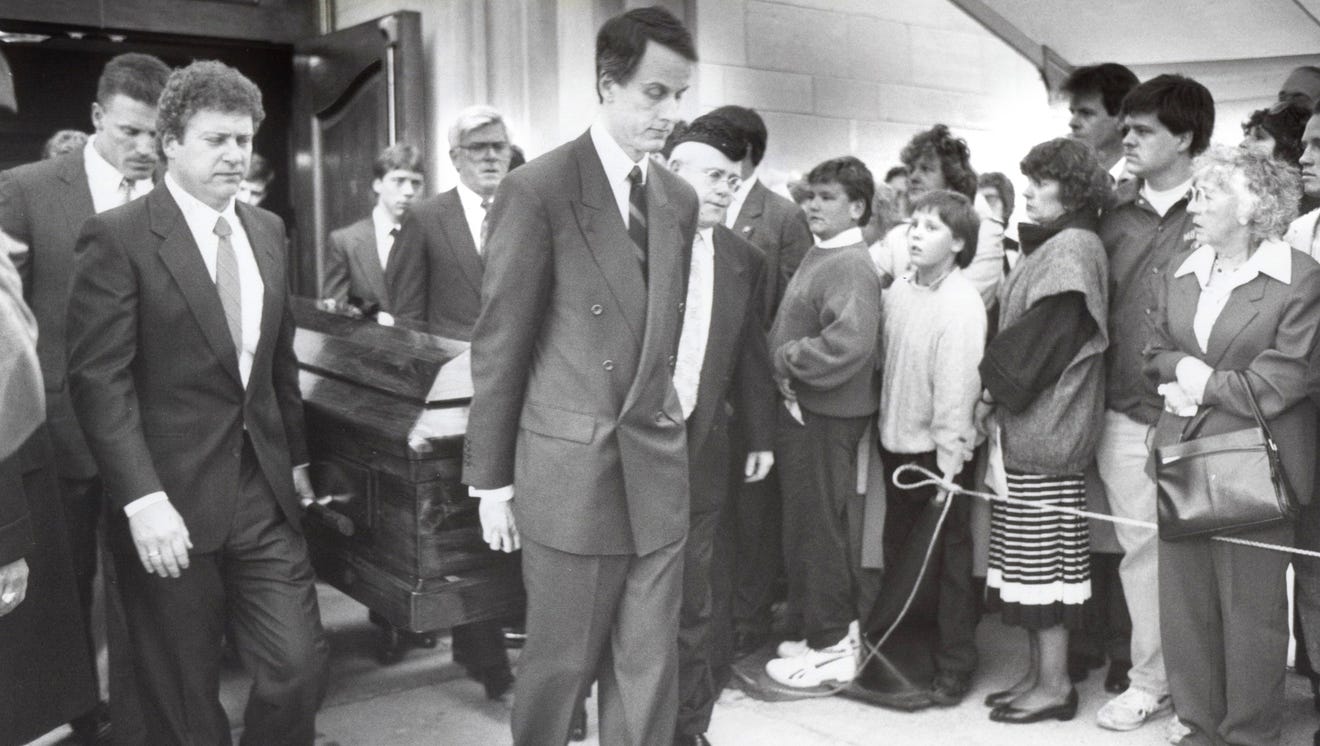 Howie Long, Phil Donahue and Elton John were among the pallbearers for the funeral of Ryan White on April 11, 1990.
Credit: Kelly Wilkinson, IndyStar
View Source

Following Ryan’s death, Jeanne White helped publish the best-selling book, Ryan White: My Own Story (1991), based on her son’s manuscript. That same year, readers of the Indianapolis Star posthumously chose Ryan White as the Star’s Man of the Year.

White’s mother also lobbied successfully for the passage of the federal “Ryan White Comprehensive AIDS Resources Emergency Act” (CARE) to provide emergency clinical care, coordination of HIV services, and early intervention. It was enacted in August 1991. Congress authorized only $110 million of the $875 million requested, a slight increase over extant federal AIDS funding. Reauthorized and amended four times (1996, 2000, 2006, and 2009), changes have made provisions to accommodate new and emerging needs, included an emphasis on funding core medical services and alterations in funding formulae.

The Iu School Of Medicine created the Ryan White Center for Pediatric Infectious Diseases and Global Health in its Department of Pediatrics to focus on children’s infectious diseases across the world in his honor. White’s doctor, Kleiman, was founding director. A national leader in pediatric infectious disease clinical care, research, and education, the center employs a team of clinical and research staff. It is partially funded by the Indiana University Dance Marathon, held annually to benefit children in Indiana and worldwide.

White is included in the children’s museum of Indianapolis’ The Power of Children Exhibition, which highlights the influence that children can have globally. It initially also included civil rights activist Ruby Bridges and holocaust victim Anne Frank. The exhibition has received critical acclaim among museum professionals and earned a 2009 American Association for State and Local History award of merit.

In 2010, Indiana University’s Rural Center for AIDS/STD (sexually transmitted diseases) Prevention and the School of Health, Physical Education, and Recreation established the Ryan White Legacy Scholarship in his honor. The scholarship is given to Indiana University Bloomington students pursuing a master of public health degree, with a preference to students studying AIDS/STD prevention.

In addition, the Indiana State Department of Health approached Meals of Wheels of Central Indiana to develop a food services program for adults with AIDS/HIV. The organization, in collaboration with the Food is Medicine Coalition (an association of nonprofit medical and nutrition service providers), established Ryan’s Meals for Life in 2017.