(Dec. 7, 1930-Nov. 18, 1988). Born in New Albany, Indiana, Richard Blankenbaker began his long career in the grocery business at age 12, working as a stock boy at a local store to help support his family. Moving to Indianapolis to take a job with Kroger, Blankenbaker later joined Stop & Shop supermarkets, managing one of the firm’s stores. When Colonial Stores purchased Stop & Shop in 1955, Blankenbaker became district manager and eventually assistant to the president. In 1959 he married Virginia Murphy, who worked as a public relations representative for Colonial and later became a state senator representing Marion County.

In 1961 Blankenbaker left Colonial to open his own grocery store at 52nd Street and Keystone Avenue. He eventually operated three Richard’s Market Basket stores in Indianapolis. Blankenbaker was known for his charitable works, including an annual Thanksgiving turkey giveaway for needy families.

In December 1980, Mayor William H. Hudnut Iii named his friend Blankenbaker as Director of Public Safety. During the years 1981-1983, Blankenbaker implemented an “austerity program” in the Indianapolis Police Department (IPD), which cut costs and personnel. By 1985 the program had produced a shortage of officers and secretaries, and IPD was forced to increase its number of employees.

Blankenbaker also implemented an in-service program on race relations and cultural understanding, as recommended by the mayor’s Tanselle-Adams Commission. During his tenure, Blankenbaker oversaw reorganizations of both IPD and the Indianapolis Fire Department (IFD). Working with police chief Joseph G. McAtee, he introduced the “field command” approach that placed more supervisors and officers in the field and attempted to foster better police-community relations. In the area of fire protection services, Blankenbaker improved communications between IFD and township fire departments and implemented a joint training program for the county’s firefighters.

The Michael Taylor Case, the 1987 shooting death of a 16-year-old Black youth, caused trouble for Blankenbaker as both public safety director and businessman. Taylor, arrested on suspicion of car theft and with his hands cuffed behind his back, was found shot in the head in the back seat of a police car. Authorities said the youth shot himself with a gun he had hidden in his high-top tennis shoes. In November 1987, a group called the Michael Taylor Justice Task Force, led by a group of Black ministers, organized a boycott of Blankenbaker’s grocery stores in an attempt to force him to release more information about the Taylor shooting. Following Blankenbaker’s death the next year, the stores declared bankruptcy. 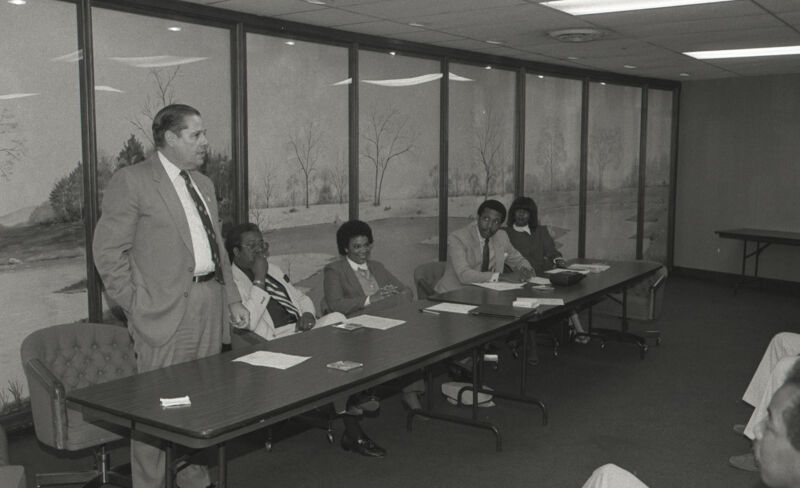 The police department memorialized Blankenbaker in 1989 by naming its north district headquarters at 42nd Street and College Avenue in his honor. He was also honored posthumously by the Naacp, Indianapolis Urban League, Indiana Christian Leadership Conference, and the Madam Walker Legacy Center in recognition of his food donations to the annual Rev. MOZEL SANDERS’ Thanksgiving Dinner, his appointment of a Black assistant public safety director, and other services to the African American community.