Born and raised in Indianapolis, Lugar was the valedictorian of his Shortridge High School class, graduating in 1950. He excelled as an undergraduate at Denison University in Ohio, where he met his future wife, Charlene Smeltzer. Lugar became the first Denison graduate to win a prestigious Rhodes Scholarship to study at the University of Oxford. While there, he enlisted in the U.S. Navy. Rising through the ranks of naval intelligence, Lugar obtained the rank of lieutenant, junior grade. As an intelligence analyst for Admiral Arleigh Burke, Lugar often found himself briefing President Dwight D. Eisenhower.

Returning to Indianapolis in 1960 to help run the two family businesses, the family farm, and Thomas L. Green & Company, Lugar soon found himself running for and winning a seat on the Indianapolis Board of School Commissioners, on which he served between 1964 and 1967. During this explosive time for all educational issues nationally, Lugar worked with colleagues on several programs, most notably the “Shortridge Plan,” a district-wide effort at reestablishing Shortridge as the premier college preparatory high school in the city. Enmeshed in matters of race and residency, the plan showed some early success before federal lawsuits against the school district changed the nature of the debate. 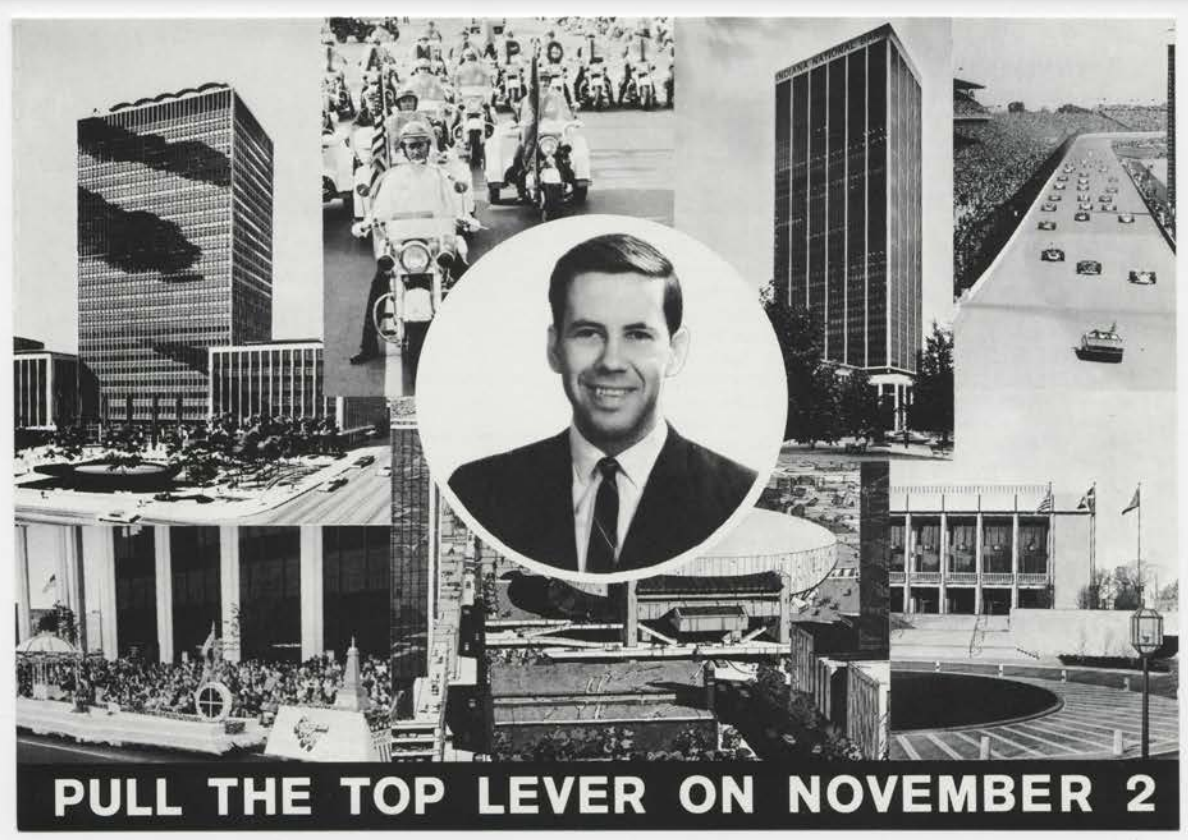 Promotional postcard for the reelection of Lugar and the success of Lugar's first term as mayor of Indianapolis, n.d.
Credit: University of Indianapolis
View Source

Following the 1966 creation of the Republican Action Committee, L. Keith Bulen sought a new, bright, fresh face to run for mayor in 1967. The 35-year-old Lugar fit the bill perfectly. Upsetting two better-known candidates in the spring primary, Lugar then defeated incumbent Democrat John Barton in the general election. The Action Committee had shown its power, and Lugar would soon show his ambition and capacious ideas.

Faced with the challenge of keeping peace on the night of Martin Luther King’s assassination, only months into his first term as mayor, Lugar hoped to persuade Democratic Presidential candidate Robert Kennedy not to attend a political rally that night in the heart of downtown, but Kennedy delivered the speech anyway (see Robert F. Kennedy Speech). That effort, plus constant striving by Lugar and surrogates in the African American community, kept major violence from breaking out in the Circle City when most other urban areas suffered through unrest.

Throughout most of 1968, Lugar and a group of key advisers, meeting informally at the home of John and Ardath Burkhart entertained ideas about how to transform the sleepy city. Two main ideas emerged: the establishment of an independent downtown state university (the preferred name: University of Indianapolis) and a plan for consolidating metropolitan government eventually known as Unigov.

Lugar and his allies laid the groundwork throughout 1968, with the help of a legal team headed by Charles Whistler and Lewis Bose, and the members of the Indianapolis delegation in the State House, to see Unigov enacted into law. The resulting legislation, which passed in 1969 and took effect in 1970, fundamentally altered both the physical size of the city and its population. As a result, Indianapolis would become one of the largest cities in the nation, and soon, the largest controlled by a Republican mayor in the country. This distinction was vital: it helped Lugar establish a close working relationship with President Richard Nixon, who was looking for an innovative mayor to implement an agenda known as the New Federalism. This close working relationship caused journalist Peter Braestrup to dub Lugar “Nixon’s Favorite Mayor,” in 1970. Lugar wore this moniker with pride until the president’s 1974 resignation when Lugar was unsuccessfully attempting to unseat Birch Bayh from his Senate seat. In 1971, Nixon’s entire cabinet visited the city, which was a coup for the city in general and especially the mayor. It marked a turning point, as soon Lugar was circling the globe, telling stories about the rebirth of his hometown. The 1971 International Conference on Cities brought global mayors to the city and further enhanced the city’s reputation.

Lugar was successful also in establishing a close working relationship with Eli Lilly. Soon, both because of changes to federal spending laws applying to the Lilly Endowment, Inc., and because of the tremendous need to rebuild the city, the city and the private philanthropy began a very close working relationship. Lugar sought Lilly philanthropy to help restore the downtown City Market, which, combined with his effort to build a new downtown home for the Indiana Pacers, meant the beginnings of a downtown rebirth. Bucking the trend across the country, Lugar insisted on building Market Square Arena directly across the street from the City-County Building.

Lugar declined to run for mayor in 1975, instead choosing to teach at Indiana Central College (University Of Indianapolis). In 1976, he launched a campaign for the U.S. Senate seat held by Democrat Vance Hartke. His victory was the first of six consecutive successful re-election campaigns. Having achieved his Indianapolis success within partisan confines, Lugar emerged as a voice of bipartisanship in Washington.

Serving as the Chair of the Senate Foreign Relations Committee from 1985-1986 established Lugar as an international leader on matters pertaining to foreign affairs. Working closely with Senate colleagues, he helped change American policy toward apartheid South Africa and enabled a peaceful election in the Philippines. Working closely with Democratic colleague Sam Nunn of Georgia, in 1991 Lugar helped design the Cooperative Threat Reduction Program, which became his signature international legacy.

Lugar’s string of overwhelming reelection successes ended abruptly when upstart Richard Murdock capitalized on Tea Party inspired anti-incumbent sentiments by winning the May 2012 Republican primary. Lugar’s moderation, which had been a hallmark of his tenure in Washington, had somehow turned into a liability, but his long absence from Indiana also caused problems.

From 2013 until his 2019 death, Lugar worked at establishing the Lugar Center for Renewable Energy at Iupui which advocated many of the issues upon which Lugar had staked his national reputation, most notably nuclear nonproliferation, bipartisanship, and agricultural innovation. Lugar received many awards during the period, including the Presidential Medal of Freedom from Democrat Barack Obama in 2013. In 2018, Mayor Joe Hogsett dedicated the lawn south of the City-County Building the Richard G. Lugar Plaza.

Lugar’s 2019 death marked the end of an era. Lugar was the city’s most consequential mayor and the state’s most significant statesman. He also established a considerable legacy as a mentor for generations of Hoosiers, many of whom entered public life because of Lugar.