Presbyterians have been present in Indianapolis since the city’s creation. The Protestant denomination developed from the reformed movement led by 16th-century French theologian John Calvin. Named for its form of congregational government, each Presbyterian congregation selects its leadership (“ruling elders”) who call and direct their pastors (“teaching elders”). These elders gather in regional bodies called Presbyteries and Synods and in a national General Assembly to govern church affairs. Presbyterians have always insisted on an educated clergy trained to read the Christian Bible in its original languages; this characteristic made it distinct from most other Christian groups on the North American frontier. Hence, through the 19th century, Presbyterian congregations attracted a more educated, middle-class membership who valued education, and worshippers tended to be prominent in civic affairs. Indianapolis’s first Presbyterian congregations followed this pattern. The first First Presbyterian Church building on the circle is in the center with pastors and elders around the edge. Top center: Pastor Phineas Gurlay; down left side: Cunningham, Ray, and McIntire; bottom center: Harrison (Benjamin); right side from top to bottom: McClung, Nixon, and Sharpe.
Credit: General photograph collection, Rare Books and Manuscripts, Indiana State Library
View Source

In keeping with their high estimation of education, early Presbyterian activities in the new settlement of Indianapolis focused on literacy efforts to afford Bible study. Physician Isaac Coe convened one of the first Presbyterian groups in Indianapolis, a Bible class at the home of a Methodist citizen, in February of 1822. From this group grew a union Sunday school the following April which gathered scholars and teachers across denominational lines and taught many village children to read. The Sunday school met in Caleb Scudder’s carpenter shop on State House square. On Saturday, July 5, 1823, First Presbyterian Church was organized there, and Scudder and Coe were elected elders. On the following Sunday, the congregation celebrated communion in their partially completed building.

The union Sunday school was the only one in town until Methodists and other denominations formed schools beginning in 1828. At that point, the original school dropped the name “union” and became Presbyterian. James M. Ray, first Marion County clerk, was Sunday school superintendent for 25 years, and pioneer merchant James Blake was associated with the institution for three decades. Presbyterians also provided weekday schools for pioneer Indianapolis. The libraries of the church and the union Sunday school were probably the earliest in the city for public use.

Amid a national debate in the early decades of the 19th century among Protestant Christians of most denominations over slavery in the United States, in 1837 Presbyterians organizationally split. In general terms, Old School Presbyterians were more conservative and tolerant of slavery as the Bible appeared to approve keeping human chattel. New School Presbyterians believed that the Bible evidenced God’s desire for human freedom; therefore, they advocated the abolition of slavery. Moreover, New School Presbyterians were more attuned to evangelical efforts to recruit Christian believers and build God’s kingdom on earth through social reforms. They also evinced a more ecumenical worldview, willing to work with other Christians in multiple endeavors—a tradition that has continued. Thus, believing that their faith required works, Presbyterians threw themselves into efforts to wipe out poverty and illiteracy, reform prisons and mental health care, and correct other social ills.

First Presbyterian Church, located on the Governor’s Circle, was an Old-School congregation. In 1838, 15 members left it to become New School in November, 1838, electing Daniel Yandes and Bethuel F. Morris as elders. By the end of 1840, when Indianapolis reported 2,662 citizens, the Presbyterians had two churches with two impressive young pastors. Phineas D. Gurley, at First Church (Old School) 1840-1849, would eventually become a prominent Washington pastor, chaplain of the U.S. Senate, and minister to Abraham Lincoln. Henry Ward Beecher at Second Presbyterian Church (New School and also located on the Circle) 1839-1847, would move to New York and attain national prominence as a preacher.

Second Presbyterian Church with portraits of the ministers positioned around the picture of the church. Henry Ward Beecher, the famed abolitionist and preacher is situated in the top photograph.
Credit: Bass Photo Co Collection, Indiana Historical Society
View Source 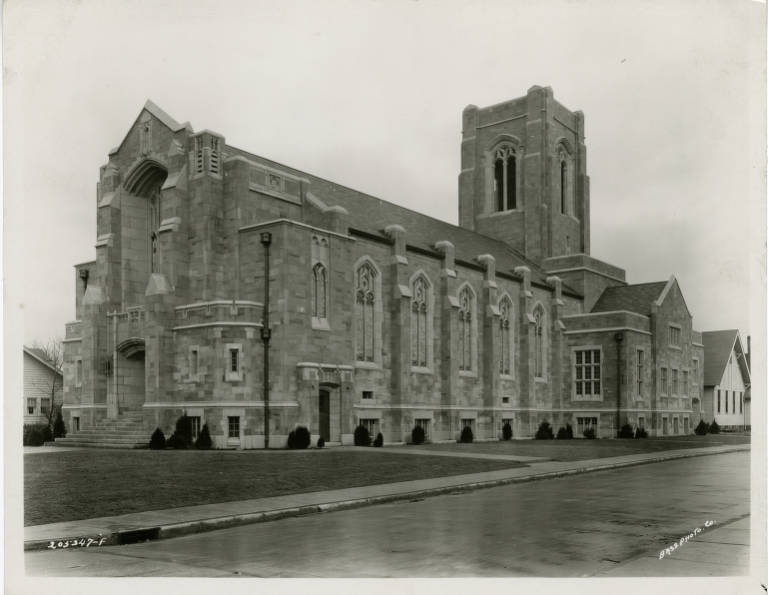 In the early-20th century, Presbyterians became embroiled in controversies over doctrinal and theological issues, such as premillennialism and postmillennialism (differing interpretations of Christ’s second coming as described in the book of Revelation, chapter 20) and fundamentalism (a belief in the strict, literal interpretation of scripture) versus modernism (which emphasizes freedom and progress in religious thought). The debates were hottest in national assemblies and seminaries, but local congregations also experienced them.

Following World War II. churches paid off indebtedness and expanded facilities. New congregations in that vital period were Northminster (1945), Covenant (1949), St. Andrew (1955), Orchard Park (1956), and Faith (1960, from historic New Providence-Southport, 1833). In 1958, after years of patient work, the United Presbyterian Church of North America came under the umbrella of the United Presbyterian Church U.S.A.

Like other Protestant denominations, issues of race and racism have plagued Presbyterianism in Indianapolis. The Rev. Martin Luther King Jr. could have been speaking about Presbyterian worship in Indianapolis throughout the 20th century when in 1960 he said that 11 am on a Sunday morning was perhaps the most segregated hour in America. Two city United Presbyterian U.S.A. congregations, Witherspoon and Immanuel, were predominantly African American, while many predominantly white churches had only a sprinkling of members of color. Black and white Presbyterians worshipped in neighborhood churches separated by redlining, school segregation, and other forms of institutional racism. With the claim that he wished to head off dispute and conflict in his congregation, one white pastor actively discouraged African American worshippers from joining his church. A legacy of discouragement and distrust of white worshippers existed among Black believers, but some Black Presbyterians showed determination to attend predominantly white churches in their neighborhoods.

Reverend Howard Warren, a Presbyterian minister, stands among signs that advocate inclusivity for the LGBT community in the Christian faith. He came out as gay and having AIDS in 1987.
Credit: Mark A. Lee LGBT Photo Collection, Indiana Historical Society
View Source

In the middle of the 20th century, Presbyterians numbered over 4 million in the United States, the fourth-largest Protestant denomination in the country. In 1969, talks began between the major northern and southern denominations, which came to fruition in 1983 as the merged Presbyterian Church (PC) (U.S.A.). Controversies over such issues as the ordination of women, however, led some conservative congregations to leave the “mainline” national Presbyterian denomination in 1973 to form the Presbyterian Church in America (PCA), which considers itself more faithful to the Calvinist tradition. Still later, as Christians debated whether congregations should call openly gay or lesbian persons as pastors, more Presbyterian congregations left the PC (U.S.A.) and joined the PCA or became independent. A Korean Church was organized in 1981.