In the early 1800s, philanthropic interest in health was sporadic, peaking during epidemics. In 1847 an early Indianapolis board of health raised $1,000 to construct a hospital for smallpox victims, but interest passed when the epidemic subsided. In 1866 the Common Council at last established City Hospital (Eskenazi Hospital) as a permanent, acute-care hospital to be operated at city expense, governed by the Board of Health and Charities which in turn hired the medical staff.

In the late 1800s, religious and other volunteer organizations in Indianapolis led the way in addressing health needs, with hospitals becoming a major focus for philanthropy. The women of the Indianapolis Flower Mission Society, formed in 1876, delivered flowers and provided volunteer nursing services to the patients in City Hospital. The Flower Mission raised funds through fairs, bazaars, and balls for a training school for nurses, the first of its kind in Indianapolis.

Colonel and Mrs. Eli Lilly underwrote a short-lived children’s hospital, Eleanor Hospital (1895-1909). In 1881 four sisters from the Daughters of Charity of St. Vincent de Paul came to Indianapolis to operate St. Vincent Infirmary, the forerunner of St. Vincent Hospital, supported by the local bishop, Silas Chatard. Methodist church members established Methodist Hospital in 1908. St. Francis Hospital was founded in 1913 by Father Killian of the Holy Name Catholic Church, supported by the order of the Poor Sisters of St. Francis Seraph of the Perpetual Adoration.

Once the Indiana University School Of Medicine (IUSM) was established in 1907, private philanthropy provided capital for new facilities and the Indianapolis campus rapidly expanded: Long Hospital to serve the rural poor (1914), made possible by $240,000 donated by Dr. and Mrs. Robert Long, and Coleman Hospital for Women (1927).

Following the death of Hoosier poet James Whitcomb Riley in 1916, his close friends decided to commemorate his life by building a pediatric hospital for Indiana children. The James Whitcomb Riley Memorial Association was formed and conducted a statewide campaign, raising $1.2 million for the new Riley Hospital For Children, which opened in 1924. African American individuals, excluded from most hospitals, opened and operated Lincoln Hospital from circa 1909-1915 to serve their own community. Protestant Deaconess Hospital operated from 1899-1935. 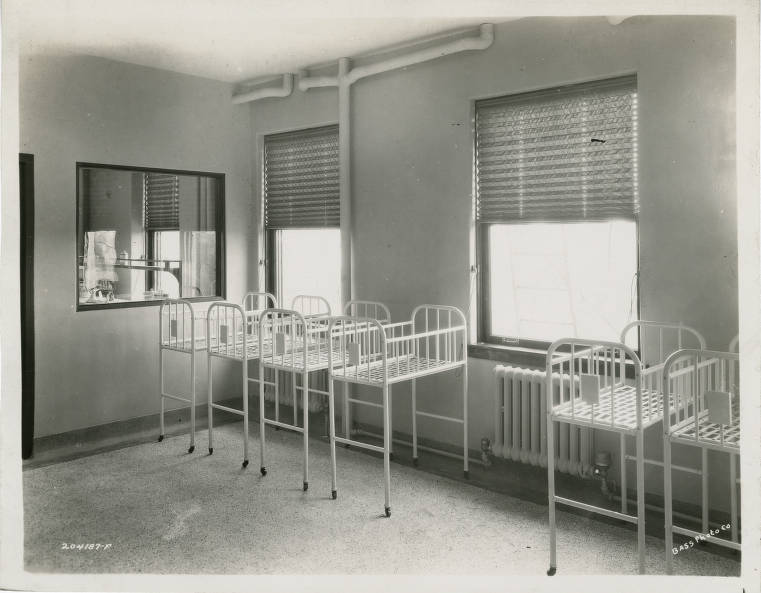 The hospital guild movement began in Indianapolis in the early 1900s, with members supporting hospitals through fundraising and volunteer service. In 1907 the St. Margaret’s Hospital Guild was founded to serve the City Hospital. Guilds formed at Riley, St. Francis, St. Vincent, and Methodist hospitals in the 1920s and 1930s.

After World War II, there was renewed philanthropic interest in health and hospital campaigns. Complementing the federal aid programs were substantial corporate and private gifts. In addition, major medical discoveries during the war led to a renewed interest in medical research and to the expanded development of voluntary health organizations.

Many voluntary health agencies formed in Indianapolis as local affiliates of national agencies. Volunteers provide community service, education, and fundraising activities. Local chapters included the National Foundation for Infantile Paralysis (March of Dimes) in 1938, the American Cancer Society in 1945, the Little Red Door in 1945, the American Heart Association in 1948, the Marion County Mental Health Association in 1949, the Muscular Dystrophy Association in 1952, United Cerebral Palsy in 1953, and the Multiple Sclerosis Society in 1954.

The Indianapolis Hospital Development Association (IHDA) was formed in 1950 by a group of civic, medical, business, and industrial leaders to raise funds both to build new hospitals and expand existing hospitals. In 1953 the IHDA launched a citywide campaign to raise $12 million in contributions. Financing was provided for Methodist Hospital, St. Francis Hospital, and the new Community Hospital, which opened in 1956. In the mid-1960s, a second campaign was conducted, raising $15.5 million. The internationally known Krannert Institute of Cardiology was founded in 1963 through the financial support of Mr. and Mrs. Herman C. Krannert. The Winona Memorial Foundation of Indianapolis, formed in 1956, built the physician-owned Winona Memorial Hospital, which operated from 1966-2004.

In the late 1960s, funds from the Cornelia Cole Fairbanks Trust Fund, created by Charles Warren Fairbanks (U.S. vice president during the Theodore Roosevelt administration) to honor his late wife, went toward the Indiana Home for Alcoholic Men, one of the oldest addiction treatment facilities in the country. Fairbanks’ grandson Richard M. Fairbanks Jr. persuaded the trust to give the money to the organization, which subsequently was renamed the Cornelia Fairbanks Home. The organization moved to a building next to Methodist Hospital and began to include services to women struggling with addiction. It became Fairbanks Hospital when the facility received accreditation for addiction treatment. It opened in a new location adjacent to Community North Hospital on the city’s northeast side in 1982 and merged with the Community Health Network at the end of 2019.

Sam Regenstrief, owner of the Design & Manufacturing Corporation (D&M), then the largest manufacturer of residential dishwashers, formed the Regenstrief Foundation in 1967 and in 1969 the Regenstrief Institute partnered with the Marion County Health and Hospital Corporation (HHA) to create the Regenstrief Institute, established to partner with a working clinic at Wishard Hospital (Eskenazi Hospital) to allow physician-scientists to test systemic improvements to healthcare as they were developed. Through Regenstrief, Wishard became the world’s first fully computerized hospital. In 1994, the Institute created the freely available international standard for identifying health measurements, observations, and documents, known as LOINC. This standardized health and research communication across borders. Regenstrief became independent and moved to a new building on the north side of the IUPUI campus in 2015. Its research patient outcomes and to streamline care delivery through the effective use and management of health information. The Regenstrief Foundation continues to provide annual financial support the Institute’s research.

In 1985, Winona’s founder Dr. Joseph E. Walther sold Winona Hospitial and used the proceeds to establish the Walther Medical Research Institute, which in 2007 became the Walther Cancer Foundation. By 2000, the Walther Cancer Institute had provided over $38 million for research, collaborating with major universities throughout Midwest. Because of these funds, researchers have contributed to a range of significant research, including the development of stem cell transplants and the coordination of Indiana’s participation in a large-scale study testing a new drug for the prevention of breast cancer. The Walther Cancer Foundation has partnered with the IU School of Medicine, the Community Health Network, IU Health, the IU School of Nursing, Purdue University, Notre Dame, and the Regenstrief Institute.

Before World War II, philanthropy and public subsidy accounted for more than half of hospital revenues in the United States. By the 1970s only 9 percent of hospital construction funds came from philanthropy. Despite this trend, ongoing development activities continued to be an important part of hospital fundraising in Indianapolis during the 1970s and 1980s. Foundations have also continued to play an important part in supporting health care. In 1990 the Indianapolis Foundation distributed approximately 29 percent of its more than $3 million in grants to health, disability, and rehabilitation organizations.

To control soaring healthcare costs, Congress passed the Tax Equity and Fiscal Responsibility Act of 1982 (TEFRA). The act moved hospitals from retrospective to prospective cost reimbursement. Hospitals could no longer bill payers their actual expenditures for patient care but had to seek reimbursement based on a fixed schedule of diagnoses. Private philanthropy has funded many nonprofit and proprietary hospitals in the U. S., but fee reimbursement provides most of the revenue. Philanthropy, therefore, fills a supplementary role in health and hospital funding, more appropriate to augment business lines or targeted initiatives.

Individual philanthropy has contributed to hospital development in addition to foundations.  Peyton and Ashley Manning donated to Ascension to establish the Peyton Manning Children’s Hospital at Ascension St. Vincent’s flagship location in 2003.  The IU Health Melvin and Bren Simon Cancer Center is a partnership between the IU School of Medicine and IU Health, named in 2006 in honor of the Melvin and Bren Simon family’s philanthropy.  IU School of Medicine Department of Ophthalmology opened the Eugene and Marilyn Glick Eye Institute in 2009, named for the Glick family’s philanthropy.

In 2010, the Richard M. Fairbanks Foundation, established by Fairbanks in 1968, contributed $20 million to IUPUI to open a school of public health on that campus. Using faculty from the IU School of Medicine and the IUPUI School of Public and Environmental Affairs, the Richard M. Fairbanks School of Public Health opened the following year. The gift not only provided money to launch its operations but also to establish an endowment to assure its sustainability.