Perry Township is located in southern Marion County. In 1822, county commissioners defined boundaries for the township they named after naval hero Commodore Oliver Hazard Perry. Among the first to settle was Jacob Smock, who farmed the area now known as Southport in 1822. Southport was platted in 1849 and incorporated in 1853 as the township’s first community; it was served by the Madison And Indianapolis Railroad. 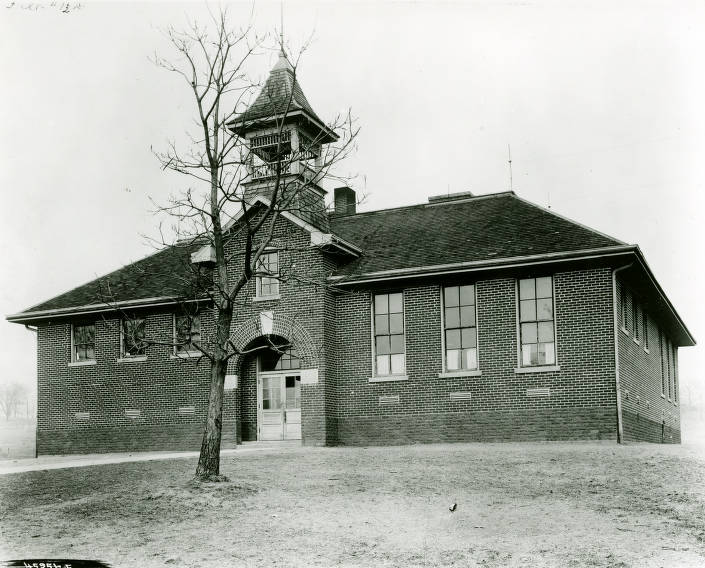 At the toll gate where Bluff and Morgantown Roads met, Archibald Glenn founded the settlement of Glenns Valley in the 1820s. The community counted about 80 residents and a few businesses by 1923.

In 1905, track elevation was mandated on the south side of Indianapolis, relieving congestion and opening Perry Township to intensive development. Realtor William Elder planned two residential neighborhoods in the district. In 1902, he donated land and a campus building for a church-affiliated college (now known as the University Of Indianapolis). In exchange, members of the Church of the United Brethren in Christ sold lots in Elder’s nearby subdivision, incorporated in 1907 as University Heights. At the same time, Elder platted the town of Edgewood, originally Stop 7 on the Interurban line, and promoted it as a quiet residential community with a small business district along Madison Avenue, the township’s main north-south thoroughfare.

German Americans built greenhouses, nurseries, and truck farms along Bluff Road and South Meridian Street in the early 20th century (see Germans). Refrigerated railroad cars transporting southern produce later led to the decline of the local farms, yet the legacy of the German growers on the southside continues.

A mammoth Big Four locomotive shop was opened in 1907 in Franklin Township, while the adjacent town of Beech Grove was platted across the boundary line in Perry. Beech Grove grew as the railroad shops expanded and prided itself as an independent community, a role it retained in the 1990s as one of the Excluded Cities under unigov.

Developer Frank Gates laid out the town of Homecroft in 1923. Most of the bungalow-style homes were constructed between 1930 and 1950. Incorporated in 1949, Homecroft has the status of an Included Town under Unigov.

The increasing popularity of the automobile in the 1950s and 1960s led to improvements in existing roads and the construction of new highways, with Madison Avenue widened and the northern segment transformed into an expressway in the 1950s. South Meridian (S.R. 135), S.R. 37, and U.S. 31 accommodated increased commuter traffic, while I-465 and I-65, constructed in the 1960s and 1970s, offered easy access to Indianapolis.

The township’s peak period of growth coincided with the emergence of Greenwood in adjacent Johnson County as a population center. From 1950 to 1970, Perry Township’s population nearly tripled, from 25,000 to 74,000, and it has continued to grow rapidly. While many residents commute, others are employed in local commercial establishments.

The district’s largest employer is the Metropolitan School District of Perry Township. The school district was not included in the Unigov city-county consolidation of 1970. The school system has a diverse student population in the 21st century. Students enrolled in its 4 preschools, 11 elementary schools, 2 sixth-grade academies, 2 middle schools, and 2 high schools, represented 67 countries and spoke 72 languages.

Perry Township has experienced a surge in student enrollment due to the increased number of Burmese-Chin refugees settling in the area since the 1990s.

Indiana is home to the greatest number of Burmese ...Read More »

Prior to 1824, all cemeteries in Marion County were rural ...Read More »