(July 2, 1843-Dec. 10, 1891). Social gospel minister, civic leader, and social worker Oscar McCulloch was born in Fremont, Ohio, the eldest of five children. McCulloch received his education in Portage, Wisconsin; Eastman Business College in Poughkeepsie, New York; and the Chicago Theological Seminary. In 1870, he was ordained as a minister of the First Congregational Church in Sheboygan, Wisconsin.

In 1877, McCulloch arrived in Indianapolis as pastor of Plymouth Church and began leading the congregation with a Social Gospel Mission. Like other Social Gospel ministers, he called for structural solutions, social justice, and equal employment opportunity, not merely palliative charity that only alleviated symptoms of social inequities. 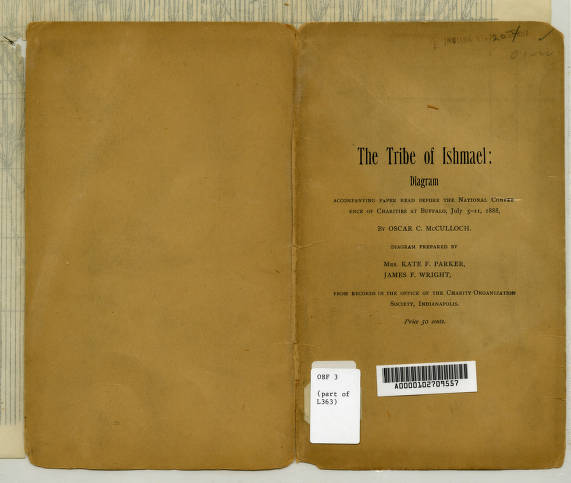 James Frank Wright of the Township Trustee’s office and McCulloch worked for 10 years compiling histories on 250 families and 5,000 individuals. Wright and McCulloch presented their findings at the 1890 National Conference of Charities and Correction as the so-called Tribe Of Ishmael (1888). The publication reflected the intellectual movement of the time, Social Darwinism, arguing that indiscriminate public relief and private benevolence fostered chronic, intergenerational poverty. Social Darwinism merged Charles Darwin’s biological theory of evolution with theories about humans and societies. In Indiana, it underpinned poor laws and Eugenics.

Once considered McCulloch’s greatest legacy, this publication was deeply flawed and lacked scientific merit. McCulloch believed that charities should work to prevent paupers from either having or raising children. Although he later changed his mind and saw social and environmental factors, not genetic determinism, as the cause of poverty, his work was used by others who supported Indiana’s late-1890s sterilization efforts and 1907 Eugenics Law.

Those who knew McCulloch described him as energetic, inquisitive, charismatic, intellectual, and ambitious. He catalyzed the evolution of charity in Indianapolis from informal charity toward organized philanthropy based on scientific principles. The Indianapolis Benevolent Society (IBS) talked of disbanding, so McCulloch invited Reverend Gurteen of Buffalo’s Charity Organization Society to speak at the IBS 1879 annual meeting.

Gurteen’s presentation compelled civic leaders to create the Charity Organization Society (COS), with McCulloch as president of both the IBS and COS. The new COS built upon the IBS structure and incorporated hallmarks of the COS movement: centralization, the prevention of begging and pauperism, paid staff, and the sharing of the results of investigation among potential donors and city officials.

The line between Plymouth Church, IBS, and COS became blurred during McCulloch’s tenure as he led all three institutions until his death in 1891. McCulloch contributed to the development of City Hospital’s training school for nurses (1883) and the Board of State Charities. His social welfare work culminated in his presidency of the National Council of Charities and Correction (NCCC) in 1891. As NCCC president he advocated a national registration of persons in need and the implementation of scientific methods of investigation to collect data on the underlying conditions of poverty.

Oscar McCulloch’s legacy as a charity organizer remains complex. With the advent of eugenics studies, the 2007 Indiana Eugenics Project, in particular, historians recently have found that his influence was greater in the Indiana eugenics movement than as a benevolent social worker. McCulloch’s untimely death cut short his opportunity to fully develop his theory and practice of poverty relief. Indianapolis Public Schools dedicated Oscar C. McCulloch School No. 5 in 1922 to serve disadvantaged children and to improve their neighborhoods.