Newspaper investigations into governmental corruption or social ills have produced three Pulitzer Prizes for the Indianapolis Star and one each for the former Indianapolis News and Indianapolis Times. Recognized as the highest honor that can come to a newspaper, the awards to the Times and the News were for “the most disinterested and meritorious public service rendered by an American newspaper during the year.” 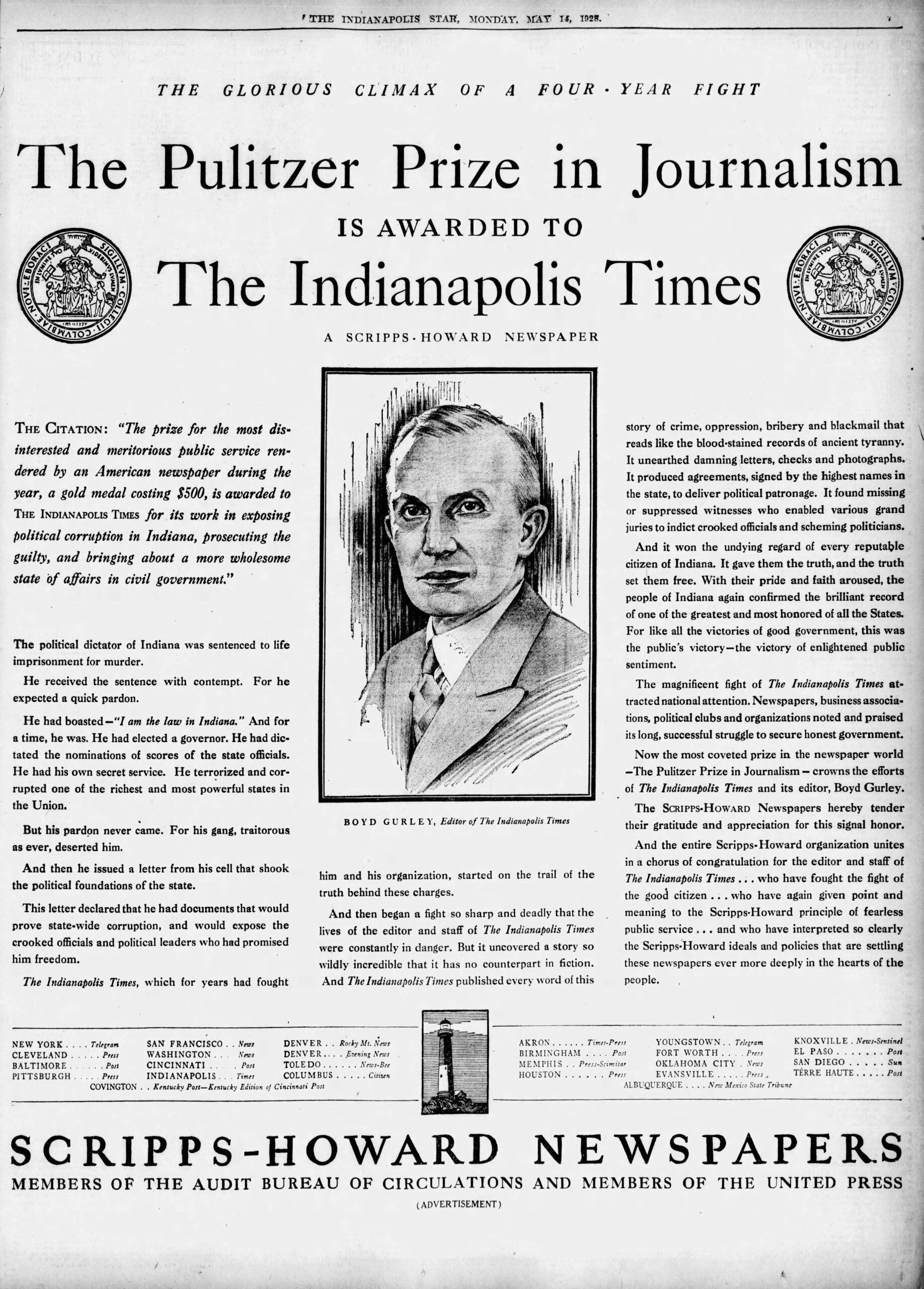 In 1928, the Times won a Pulitzer for exposing Ku Klux Klan-connected political corruption in Indiana. The   News received the award in 1932 was for a campaign to reduce waste in city and county governmental management and to lower tax levies.

The Star ‘s 1975 Pulitzer was given for “local specialized reporting” and honored a three-member investigative team that disclosed local police corruption and lax law enforcement. Recognition of the Star in 1991 was for the “investigative reporting” of two reporters on medical malpractice in which repeat offenders escaped discipline by licensing authorities. The Star’s third Pulitzer Prize came in 2021 after a team of reporters, photographers, visual journalists, and editors led an investigation into police dog bites.

The foremost Pulitzer accomplishment was that of the Times, whose disclosures shook the foundations of city and state government. Its articles revealed the influence of David Curtis (D. C.) Stephenson, Grand Dragon of the Indiana Ku Klux Klan, over local and state Republican administrations. Times editor Boyd Gurley directed investigations conducted primarily by reporter Frank J. Prince. Prince’s most notable revelation concerned a $10,000 bribe offered by Secretary of State Ed Jackson to Governor Warren T. McCray if he would appoint a Klan-connected lawyer as Marion County prosecuting attorney. McCray refused. At the time of the exposure, Jackson was governor of Indiana. He was indicted by a Marion County grand jury but the statute of limitations had expired.

The Times also produced evidence under which Indianapolis Mayor John L. Duvall was indicted and convicted of violating the Corrupt Practices Act. He resigned as mayor. Six city councilmen were indicted on charges of accepting bribes and later pleaded guilty to lesser charges, paid fines, and resigned their offices. 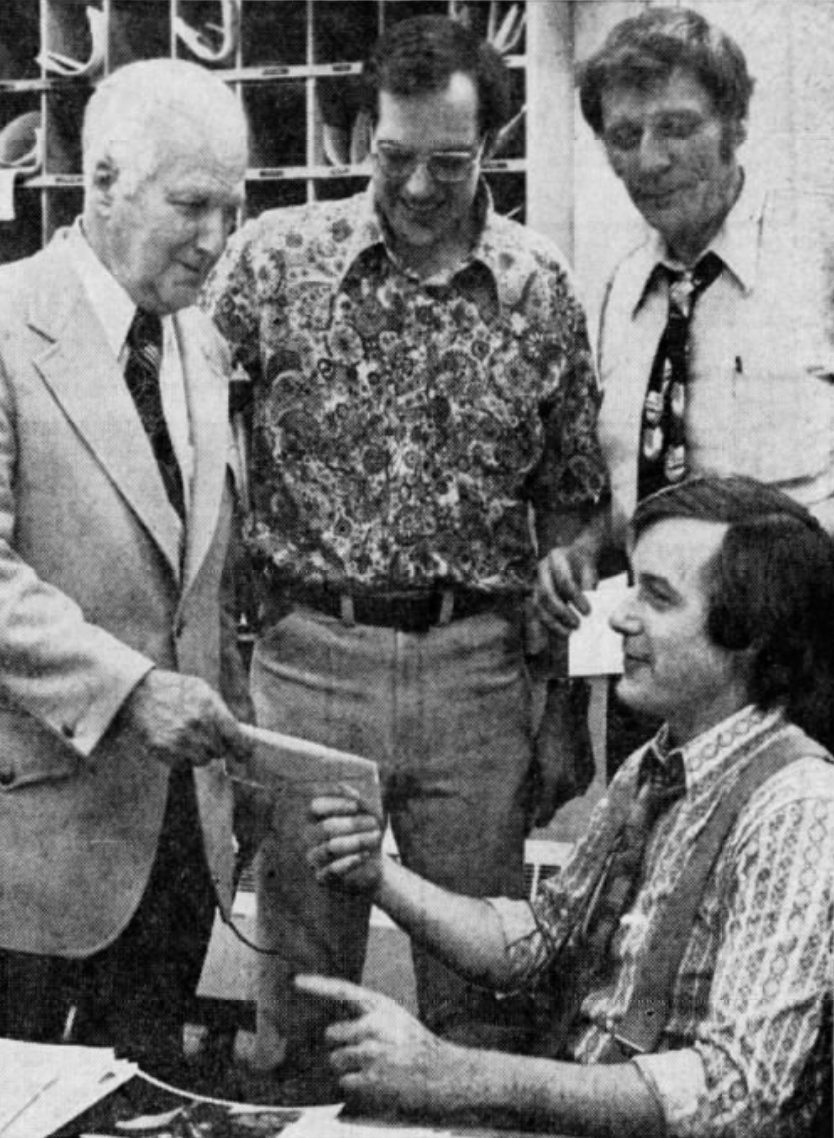 The News’ 1930-1931 campaign for better government, based on extensive studies of city and county budgets and tax rates, revealed wasteful management practices. Reporters under city editor Wayne Guthrie disclosed wide variations in the cost of similar services by one unit of government compared with another one. The efforts of the News led to budget changes in 86 counties that saved taxpayers approximately $12 million over two years. 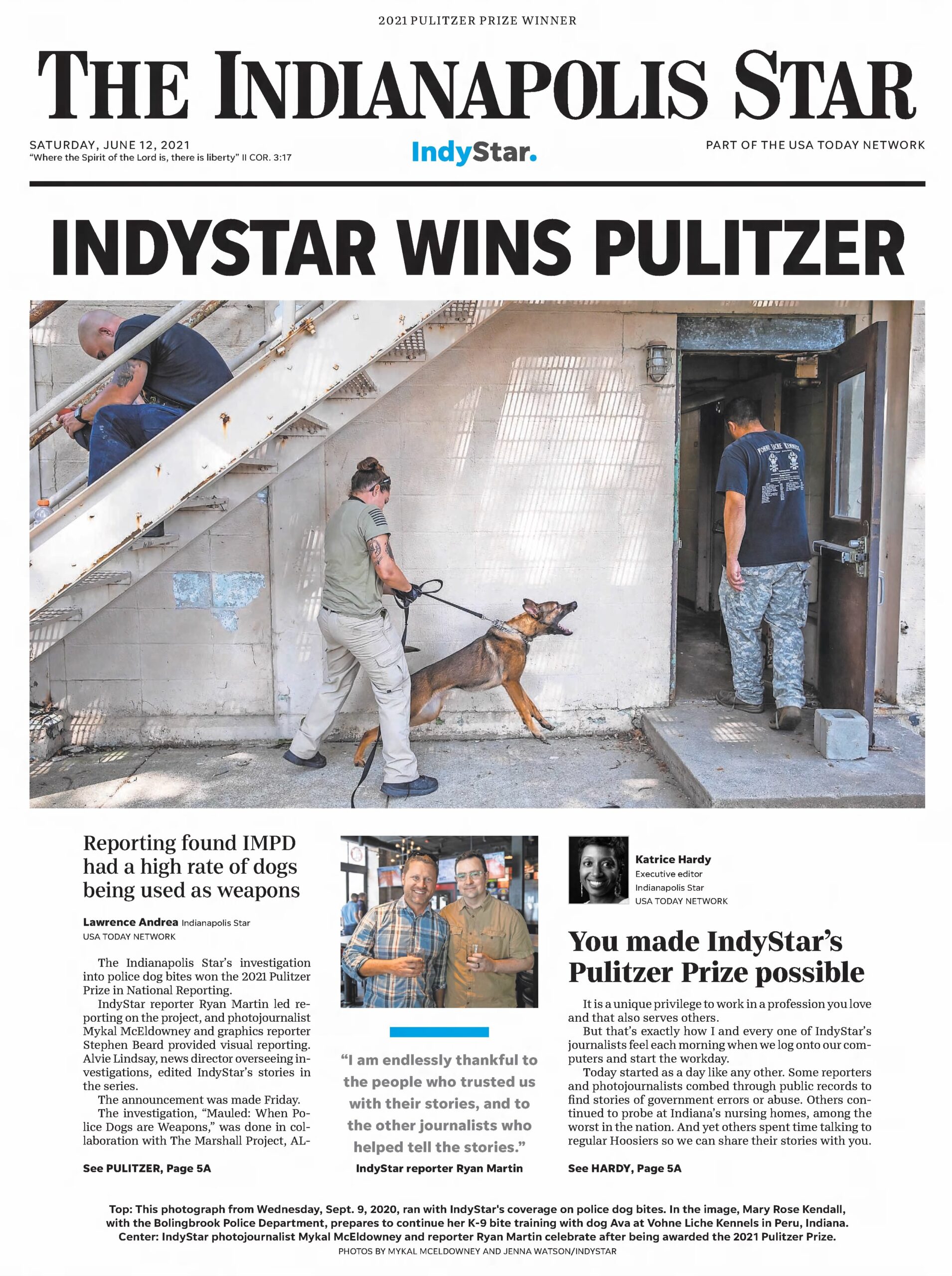 The 1991 Pulitzer recognized the investigative reporting of Star reporters Susan M. Headden and Joseph T. Hallinan. Their stories documented medical malpractice cases in which a small number of Indiana doctors had lost multiple civil suits against them but suffered no later form of punishment from licensing authorities. Following the awards, the reporters noted that their articles apparently had had no effect on the system.

The 2021 award followed an investigation the previous year that explored the Indianapolis Metropolitan Police Department’s use of K9s. It found the department had the highest rate of dog bites among police departments in the largest 20 U.S. cities. The journalists involved were reporter Ryan Martin, photojournalist Mykal McEldowney, graphics reporter Stephen Beard, and Alvie Lindsay, news director overseeing investigations.

Two other Pulitzer awards have gone to Indianapolis figures. A dramatic photograph of a crazed Anthony Kiritsis holding realtor Richard Hall hostage at gunpoint won a Pulitzer Prize for spot news photography in 1978 for John H. Blair, a free-lancer for the United Press International at Indianapolis. Charles G. Werner, the Star ‘s editorial cartoonist since 1947, won the Pulitzer Prize for editorial cartooning in 1939 when he worked for the Daily Oklahoman of Oklahoma City, Oklahoma. His subject was Hitler’s march into the Sudetenland.