Well into the 20th century, ownership of franchise automobile dealerships was almost exclusively the domain of white males. Indianapolis fit this pattern until the 1970s. 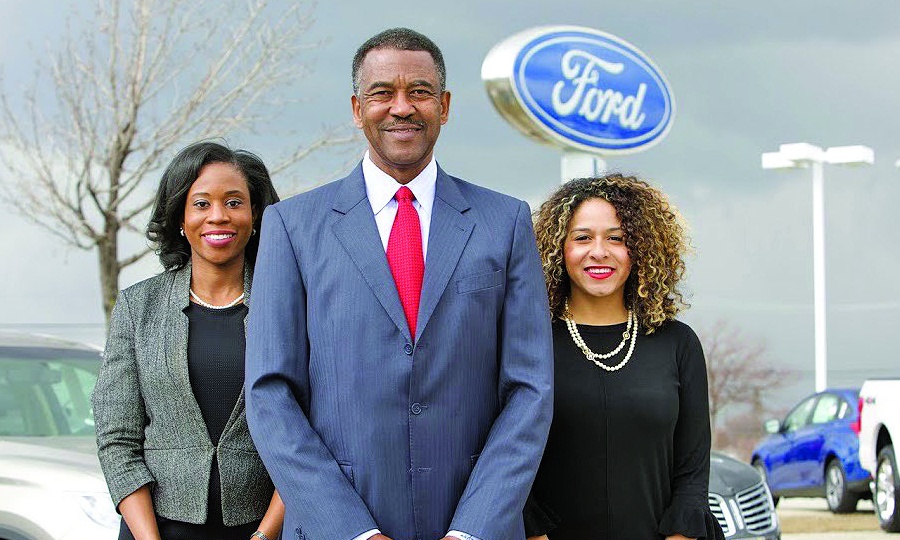 Lockhart operated her dealership at 5550 North Keystone Avenue. It won numerous industry awards and later added the General Motors brands Hummer and Saturn to its lineup. Until her retirement in 1999, Lockhart led her enterprise into becoming the largest Cadillac dealership in both sales and service in the state of Indiana.

Frank Kennedy, an African American, became owner of the popular Hoosier Chrysler-Plymouth at 3700 Lafayette Road. Ultimately, the dealership took the name Kennedy Chrysler-Plymouth, Inc. and sold cars with the tagline, “A name you know … A product you trust.”

In 1989, Kennedy built a new 40,000 square-foot sales and service facility at 5346 Pike Plaza Road. Opened with great fanfare in the press, it was the city’s first new Chrysler facility in 15 years. It was located along a row of dealerships that became a bustling center of commercial activity.

By the early 1990s, there were three dealerships operated by ethnic minorities selling new cars in Indianapolis. They were Wells, Kennedy, and West Indy Jeep-Eagle on the city’s west side.

Between 1989 and 1993, Wells expanded his business to the nearby city of Anderson with dealerships that sold Ford, Chrysler, and Nissan products. He also began selling the Daewoo, a South Korean import that was new to the United States market.

In 2000, Payton Wells organized his impressive dealership holdings into the Payton Wells Automotive Group. However, financial and legal challenges forced the company to close its dealerships in 2007.

Between 2000 and 2010, other minority-owned dealerships began to emerge, including Eric Dickerson Buick at 7250 North Keystone Avenue. The business enjoyed rapid success, and twice ranked first place in sales for Buick’s 10-state sales district. However, Dickerson sold his dealership in 2006 and entered politics. He was a candidate for the 7th District Congressional seat, losing a close race to incumbent Representative Julia Carson.

In 2003, Fernando Falcon, a veteran sales executive, partnered with Chrysler under its Minority Dealership Program and opened Champion Chrysler-Jeep-Dodge-Ram, at 4505 West 96th Street. He started with a minority stake in the business. However, in 2007 Falcon became the sole owner and expanded the enterprise with quality service and a highly successful marketing campaign.

By the end of the decade, a national recession, higher operating costs, and downsizing by auto manufacturers caused extreme difficulties for dealerships across the country, regardless of the race or gender of the owners. Many local enterprises were forced to become smaller used car dealerships or to close.

Among the Black-owned dealerships, only Falcon’s Champion Chrysler survived. As of 2021, it remained the only African American dealership selling new vehicles in Indianapolis. However, Champion continued to grow quickly with the resurgence of the economy. In 2012, Falcon and his business partners formed Quattro Auto Group, a new venture committed to growing the number of minority-owned new car dealerships across the country.

Freda Lockhart’s family continued to operate the dealership she developed, overcoming massive challenges in the industry. In 2010, General Motors ended its contract with Tutwiler Cadillac, Lockhart’s rival dealer. This left Lockhart standing as the only Cadillac dealer in the Indianapolis market for several years. By 2011, the Lockhart Automotive Group included the Indianapolis auto center, as well as locations in the suburban areas of Fishers and Greenwood.

Other women who have owned dealerships in the Indianapolis area include sister co-owners Courtney Cole and Monica Peck of Hare Chevrolet, a dealership located in Noblesville. Their family started in the transportation business building wagons in 1847. Hare began selling cars in 1912 and added the Chevrolet brand in 1921.

Cole and Peck purchased majority ownership of Hare Chevrolet from their parents in 2008. Despite a crushing recession, the sisters led Hare to become one of Chevrolet’s top 25 dealerships in the country. Cole and Peck sold their business in 2017.

Kathy Martin Harrison has achieved success as owner and CEO of Ed Martin Automotive Group. The company was started in 1955 by her father and mentor, Ed Martin. Harrison took over after his death in 2005. As of 2021, Ed Martin Automotive Group was one of the city’s largest female-owned businesses with nine car dealerships representing 12 auto manufacturers in Indianapolis, as well as the suburban areas of Carmel, Fishers, Noblesville, and Anderson.