When Unigov was considered during the 1969 session of the Indiana General Assembly, State Representative E. Henry Lamkin Jr. (R-Indianapolis) introduced a companion bill to allow for smaller-scale community governments. This so-called Minigov bill proposed the creation of organized communities within Indianapolis, with community councils elected to decide certain neighborhood affairs. Its sponsor and supporters promoted Minigov as enhancing representation and preserving neighborhood identification, while Unigov extended the scale of the city of Indianapolis and its governmental structure. 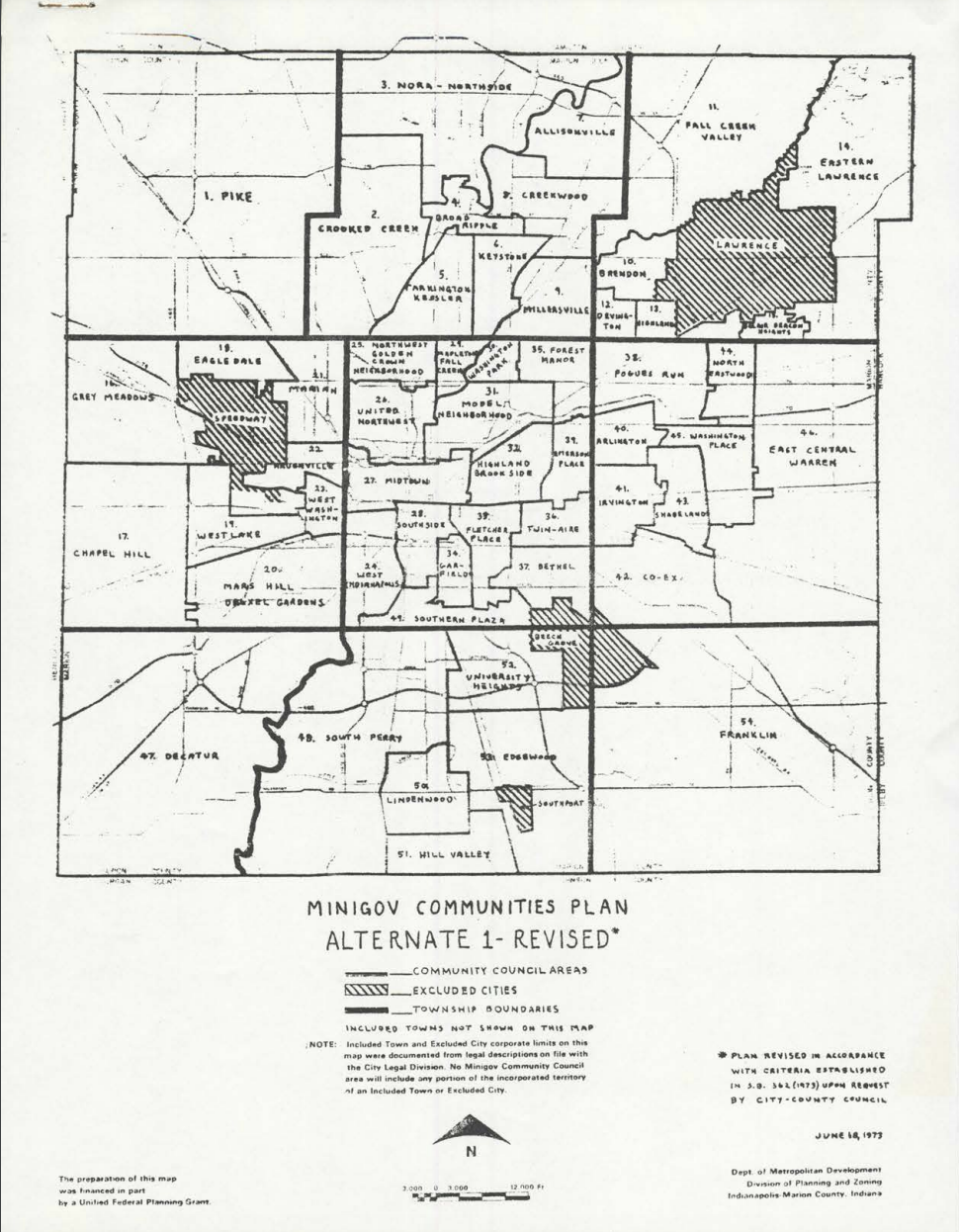 Under the original bill, community councils would have had the same general powers as town boards of trustees, except for those powers that were specifically denied to them by either the Unigov law or actions of the City-County Council. Among other things, community councils would be authorized to: adopt traffic flow and parking regulations for residential side streets; spend funds appropriated to them by the City-County Council or raised from other sources; contract with city-county government or with private organizations for neighborhood services such as supplemental police and fire protection, community improvements, and park and recreation facilities; and propose changes to the county’s Comprehensive Land Use Plan as well as hear and decide upon requests for zoning variances.

The Minigov bill passed the House but did not come up for a final vote in the Senate during the 1969 session. It was reintroduced in 1971, but its passage was neither pursued nor opposed vigorously, largely because the attention of local officials and political groups in Marion County was focused on the initial implementation of Unigov. 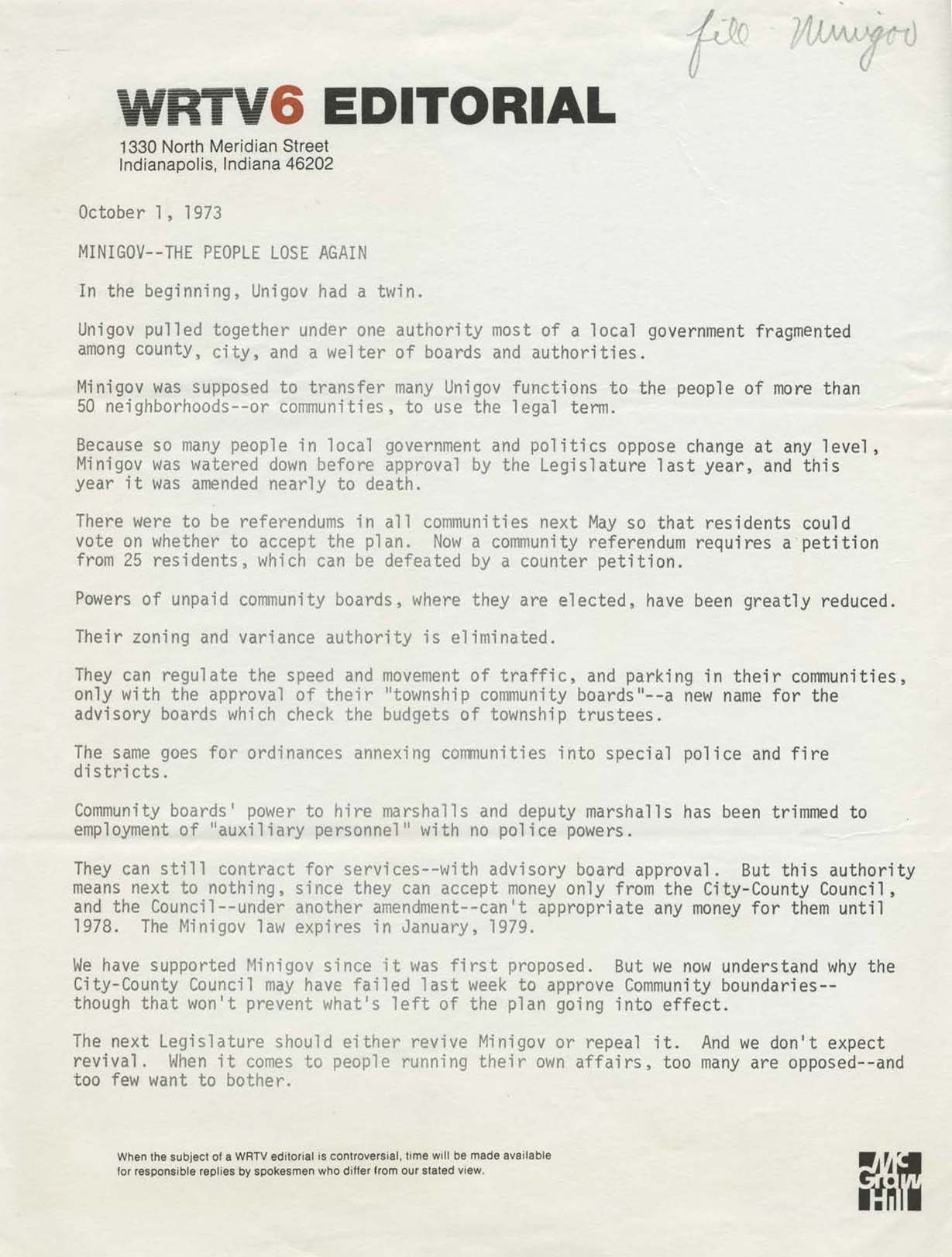 During the 1972 legislative session, a modified version of the Minigov bill passed both chambers and became law. The modifications stripped the councils of their authority to decide zoning and traffic issues, leaving them only the right to be advised of and comment on proposed traffic or zoning changes in their neighborhoods. The 1972 law kept the community councils’ powers to receive and spend funds and contract for supplemental services. The law contained an expiration date of April 1, 1979, after which Minigov would remain in effect only if reauthorized by the state legislature.

The Minigov law directed the Metropolitan Development Commission to prepare and submit to the City-County Council a community plan, dividing the entire area of the Consolidated City into communities. Each community was to contain at least 5,000 persons and at least two precincts, and each was to conform as nearly as possible to existing natural and political boundaries.

More substantial and organized opposition to Minigov mobilized during the remainder of 1972. Some existing neighborhood organizations and political party officials feared that their influence in city-county government would be diminished by the elected community councils. Several members of the City-County Council perceived themselves to be the proper representatives of residents’ interests and concerns and thus opposed Minigov.

During the 1973 legislative session, State Representative Doris Dorbecker (R-Indianapolis) introduced a bill to repeal Minigov. The bill’s original sponsor, Rep. Lamkin, avoided the repeal by introducing and obtaining passage of additional amendments to the Minigov law. Township advisory boards were inserted into the process of developing the community boundaries, community boundary lines were required to conform to precinct boundary lines, and the minimum size for a community was increased to three precincts. Community councils were redefined as advisory to the township advisory boards, and any contracts for services proposed by a community council had to be approved by its corresponding township advisory board. Funding allocations could come only from the City-County Council, and expenditures would have to be administered through the city’s Purchasing Department.

Despite these changes, Minigov was not implemented. The City-County Council refused to approve any submitted community plans or to recognize and appropriate funds to any community council. The provisions of the Minigov law expired in 1979. The Unigov law still authorizes the City-County Council to designate community councils and to define their powers, but there has been no widespread attempt to revive Minigov.