Originally known as the Merchants National Bank building, the structure was the tallest building in Indianapolis from its completion in 1913 until 1962. Situated on the southeast corner of Meridian and Washington streets, the 17-story Chicago School building was designed by Daniel H. Burnham. Built of Kittanning brick (brick made from clay from the Allegheny River basin and manufactured in Kittanning, Pennsylvania), Indiana limestone, and architectural terra-cotta over a steel skeleton, it was constructed in two phases beginning in 1904. 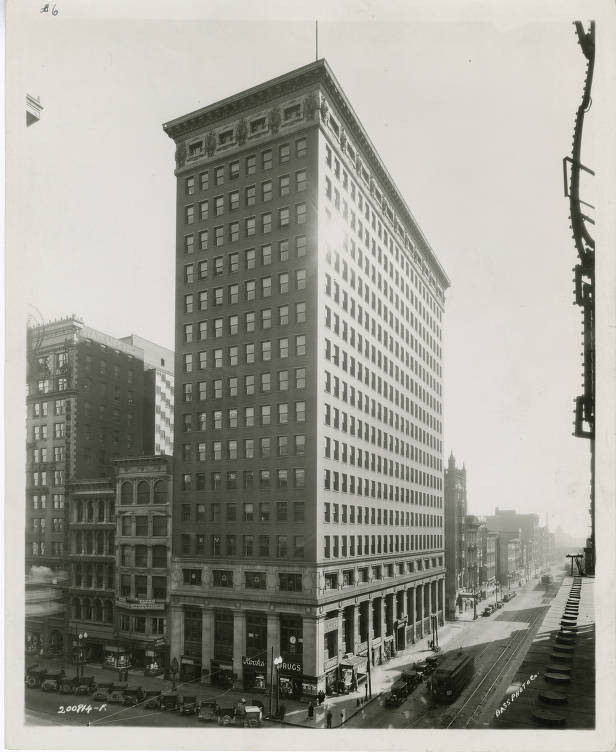 The original four-story structure forms the banking hall and first three floors of the building, with the principal facade facing west on Meridian Street. The north (Washington Street) facade incorporated the Merchants National Bank Annex, built in 1938 by F. W. Woolworth, from two earlier buildings. At that time, an Art Moderne (a streamlined style that developed out of 1930s Art Deco to emphasize simple geometry) limestone facade was added. The Kirk Furniture Company altered it in 1969. The structures are connected to the original building on the upper floors. The roof was once used by city firemen to check the area for fires and is the site of the tower used to transmit the first television broadcast in Indiana in 1949.

Of particular interest is the extensive use of green Georgia marble and ornamental bronze in the banking hall. The bank counters are formed of marble, as are eight Doric columns (columns with simple circular capitals) supporting the coffered ceiling and second-story balcony. Ornamental bronze is found in six globe ceiling lights, teller cages, and counter screens of statuary bronze decorated with shields and rosettes. The U-shaped structure also contains a 16-story open well, an ornamental iron and marble stairway with the original marble wainscoting, as well as many other original interior details designed by Burnham. The location was listed on the National Register of Historic Places in 1982.

United Mine Workers Of America

The National Federation of Miners and Mine Laborers was ...Read More »