Marshal Ferdinand Foch, commander-in-chief on the western front during World War I, toured the United States in 1921 as a guest of the American Legion. Leadership from Indianapolis, Marion County, and Indiana jointly planned for the visit, in cooperation with the American Legion. Legion and National Guard units from across the state participated, and Governor Warren McCray invited dignitaries from across the nation. 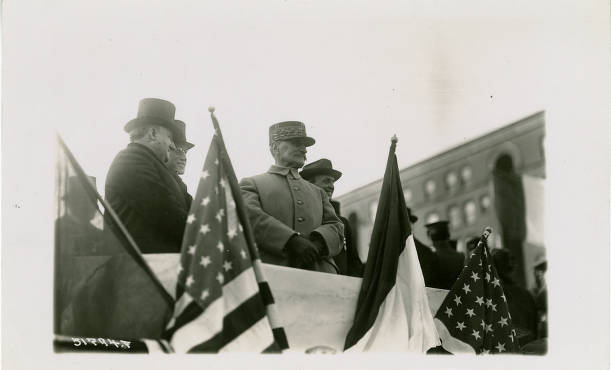 Foch’s special train arrived at Union Station at 9 A.M. Governor McCray and Mayor Charles W. Jewett spoke, and the marshal responded through an interpreter. The official reception committee and 200 citizens greeted him while thousands waited outside. The day’s events began with a reception at the Claypool Hotel and included a 25-mile race at the Indianapolis Motor Speedway, the governor’s luncheon at the Indianapolis Country Club, a mammoth parade, the dedication of the cornerstone of the planned Indiana World War Memorial, a brief visit to the American Legion National Headquarters, and a banquet at the Claypool. Foch also planted a tree at the Indianapolis Country Club.

A mass meeting at Cadle Tabernacle climaxed the day’s events, with 12,000 seated and 2,000 standing. Foch returned to Union Station at 9 P.M., where a crowd again waited to catch a glimpse of him, and he then departed the city. 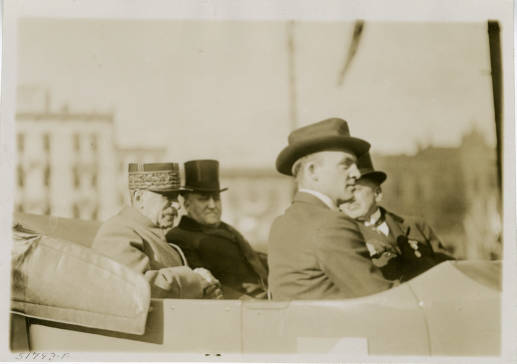 Surviving mementos of Marshal Foch Day include a stone salvaged from a destroyed bridge over the Marne, dedicated on that day as the cornerstone of the future War Memorial, and a 16th-century pillar from the Belleau Cathedral that was used as an altar during the cornerstone dedication. Both may be seen at the American Legion Museum. The actual cornerstone of the Indiana War Memorial was laid by General John J. Pershing in 1927.