La Plaza, Inc.’s history began in 1971 with the Hispano-American Center (HAC). Members of the Mexican American Community and Catholic Social Services founded the center to address the needs of the growing Hispanic community, particularly migrant workers. Six years later the Catholic Archdiocese of Indianapolis donated a building in downtown Indianapolis to HAC to serve as their home.

La Plaza, Inc. formed almost 30 years after HAC’s founding as a coalition of three existing Latino organizations. A fourth organization, created after LaPlaza’s launch, joined later. Each organization had different missions and provided different types of services, but they shared a common goal was to enhance services to Latino and Hispanic communities.

In 1980, with the help of HAC, FIESTA Indianapolis was formed to promote awareness and understanding of the city’s Hispanic heritage and celebrate National Hispanic Heritage Month. FIESTA incorporated as a separate entity in 1984. In 1981 the Indianapolis Hispanic Chamber of Commerce (IHCC) was founded to promote Hispanic businesses. With help from St. Mary’s Church and the Hispanic Methodist and Apostolic churches, the Hispanic Education Center was founded in 1988 to provide educational programs to the growing Latino community. These services became critical in the wake of the Immigration Reform and Control Act of 1986 that granted millions of unauthorized immigrants to apply for legal status amid federal budget cuts made during the Reagan administration.

In 2000, at the same time, United Way Of Central Indiana released a comprehensive study of the Indianapolis Hispanic community. The Indianapolis Foundation, Lilly Endowment, Inc., United Way, and the Indianapolis Private Industry Council funded the study. La Plaza’s first goal aimed at utilizing each of the four organization’s strengths while allowing them to maintain a degree of autonomy. By 2003, La Plaza functioned as a single organization with Carmen DeRusha of the Purdue Extension and Fiesta Indianapolis as its first executive director. A year later in 2004, Miriam Acevedo-Davis became the next and current executive director. 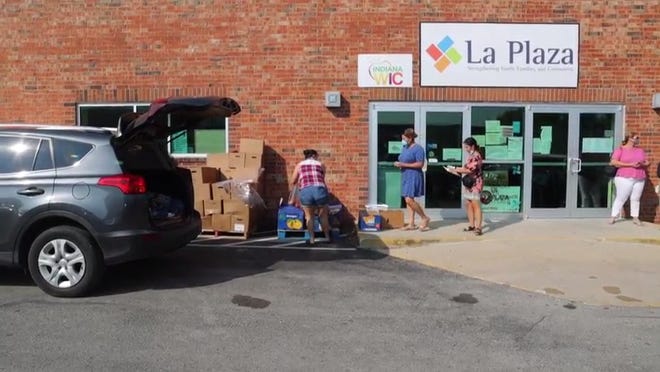 Shortly after La Plaza, Inc.’s organization, traditional funders cited its lack of cohesion and lack of political clout. Funders used this perception to withhold financial support, which led to large deficits for the organization. Exacerbating La Plaza, Inc.’s dire financial situation, the Great Recession of 2008 affected attendance at FIESTA resulting in long-term losses ($196,100 in 2008 to $95,415 in 2017).

By 2016 an economic recovery and La Plaza, Inc.’s endurance through the recession resulted in significant new funding. The Lilly Endowment granted La Plaza, Inc. $5 million and VOCA (The Victims of Crime Act) yielded $450,000. A year later, 2017, the Walton Family Foundation gave the group $400,000. VOCA continued its support of La Plaza, Inc. in 2018 with a $400,000 grant. La Plaza, Inc. has used the two VOCA grants it has received to increase safety, self-reliance, and independence of Latina women who are victims of violence. La Plaza, Inc. provides advocacy and case management services to these women.

Though La Plaza, Inc. continues to coordinate the annual FIESTA celebration, it is its outreach work that has changed the lives of many in the community. Services offered to the Latino community range from education to a broad range of onsite and referrals support through their Access to Health in Social Services program. La Plaza’s education programs include help for school-age children from 1st to 12th grade and a college scholarship through the Latino Scholarship fund.