The architectural firm Mcguire And Shook designed this Gothic Revival building in 1925, at 941 N. Meridian Street, to house the insurance department of the Supreme Lodge of the Knights of Pythias. The steel-skeleton, three-story structure features elaborate ornamentation with glazed crosses along its roof perimeter and a different horizontal design along the base of each story. The entrance is flanked by large brass lanterns. 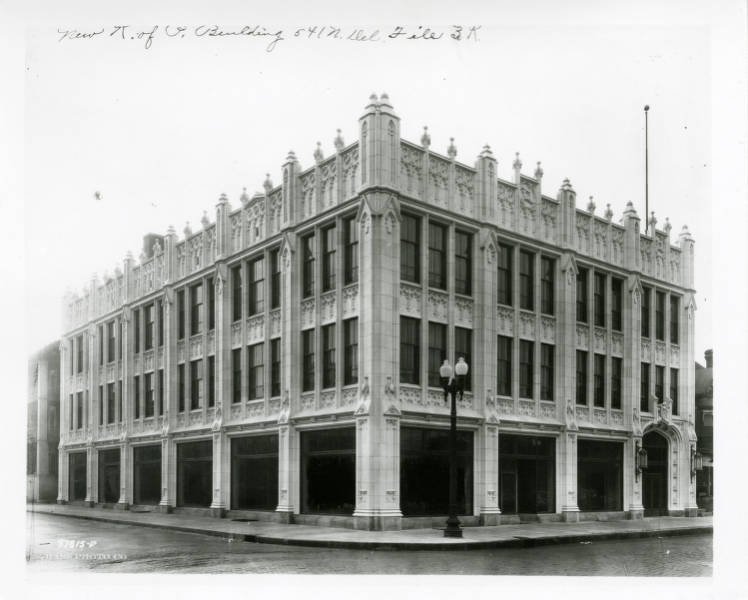 At the time of its construction, the building’s interior was opulently appointed. The lobby and vestibule walls were yellow Verona marble with alpine green marble bases. The lobby ceiling was an intricately detailed gold-painted plaster. The second and third-floor walls were wainscoted with white Alabama marble.

In 1946, Stokely-Van Camp purchased the 24,000-square-foot building to use for offices. During remodeling, the company removed the marble paneling and wainscoting and installed a dropped, acoustic tile ceiling throughout. In 1958, the company added a plain limestone extension at the rear of the original building.

A major renovation occurred in 1987 after Stokely sold the building in 1985 to Mid States Engineering (MSE). A new lobby was added and the original lobby was divided into a vestibule and conference room.

Wallpaper and oak replaced the marble walls on the first and second floors, while mahogany covered the third. MSE left the space after selling their firm to Analytical Surveys Inc., in 1997. The new company leased space in the building until moving out of state in 2002.

In 2007, Buckingham Companies purchased the three square blocks of downtown real estate that included the building. Buckingham renovated the interior, put new windows on the first level, restored the white terra cotta exterior, and moved its headquarters to the upper two floors. The lower level was reserved for future expansion, tenants, and retail space.