(May 31, 1846-Oct. 20, 1921). Founder of the Indianapolis News and the Union Trust Company, civic leader and philanthropist John Holliday was born in Indianapolis to the Rev. William A. and Lucia Shaw Holliday. He went to local public schools, North Western Christian University (Butler University), and earned A.B. and M.A. degrees from Hanover College. Holliday served in the Civil War in the 100-day 137th Regiment, Indiana Volunteer Infantry. John Holliday married Evaline Macfarlane Rieman in 1875. The couple had six children. 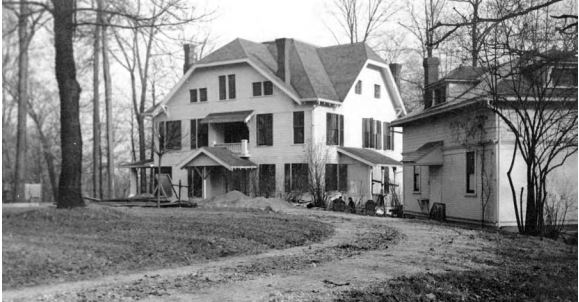 Holliday apprenticed as a reporter and editor for the Indianapolis Journal. In 1869 he founded the Indianapolis News, a departure from the popular daily newspapers. It cost two cents (half the price of any other daily in Indiana), ran in the evening, and was written to appeal to women as well as men. His daring business model was doomed to failure according to the journalism conventions of the day: no one read the paper in the evening, its editorials refused to take on a partisan slant, and it avoided a circulation alliance with either political party.

News from the East Coast came in via telegraph, which cost more during the day than overnight, driving up operating costs. The first issue of the News was an “extra” edition that covered President Ulysses S. Grant’s first Congressional address. Holliday scooped the other papers and the News was off and running. He hired top-quality reporters, he wrote and edited well, and citizens bought the paper for its reasonable price and lack of political bias. The paper thrived and had to invest in new printing presses twice to keep up with demand. Circulation rose to 4,000 within two years and 25,000 by 1892.

The success of the Indianapolis News translated into tremendous personal and professional rewards for John Holliday. His business acumen and willingness to take a stand on difficult matters brought financial security and access to virtually all the social networks in the city. He led several charitable organizations institutions including the Charity Organization Society (in 2020 Families First). Among many philanthropic pursuits, Holliday served as a trustee of Crown Hill Cemetery, president of Hanover College, and cofounded the Indianapolis Foundation.

John and Evaline were both leaders of First Presbyterian Church, and he laid the cornerstone for its new location on Delaware Street. They cofounded the Society Of Indiana Pioneers, and he served as its first president. Holliday was active in the Indiana Historical Society, which published his Indianapolis And The Civil War (1911). Holliday donated $25,000 to Emmerich Manual Training High School, the last major gift of his lifetime. He received an honorary LL.D. degree from Wabash College.

The Holliday’s participated in the Indiana (1916) and Indianapolis (1920) centennial celebrations. As part of the state’s centennial, John and Evaline Holliday bequested to the city their 80-acre estate on the west bank of White River near Crows Nest. The 1916 announcement described the estate’s purposes to be “for recreation and the study of nature… as a public park and a playground.” The estate became Holliday Park, John and Evaline Holliday’s best-known philanthropy.