(May 7, 1940-Aug. 24, 2021). Jerald (Jerry) Harkness was born in Harlem, New York, to Lindsey and Lucille (Bailey) Harkness. Harkness’ parents divorced when he was young, and he and his sister moved with his mother to the Bronx. 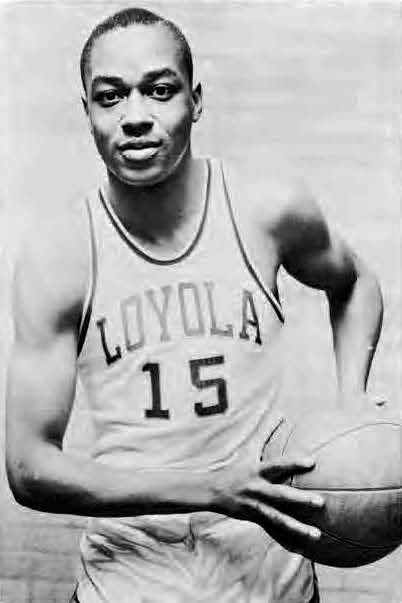 Multi-talented athletically, Harkness was more a runner than a basketball player in his youth. At DeWitt Clinton High School, he won the 1,000-yard event in track and field and placed third in the city cross country championship. He credited a chance encounter with Jackie Robinson at the Harlem YMCA with changing his life course. Robinson remarked on Harkness’ skill, telling him, “You know, you’re not that bad of an athlete, you might be able to get a scholarship to college.”

Loyola University of Chicago offered Harkness a full athletic scholarship to play for the college’s integrated basketball team. He led the team in scoring for three consecutive years, averaging 21.6 points per game. His collegiate record of 1,749 points remains the third-highest in Loyola’s history. As team captain in 1963, he led Loyola to the National Collegiate Athletic Association (NCAA) Championship and was named the NCAA’s Most Valuable Player and Consensus All American. Loyola inducted him to its Loyola University Athletic Hall of Fame and his number 15 jersey was retired.

The 1963 tournament put a spotlight on the racial tension prevalent in sports in the 1960s. Loyola’s second-round game against the all-white team of Mississippi State in the NCAA championship on March 11, 1963, is known as the legendary “Game of Change.” Loyola’s coach violated the prevailing unwritten rule of playing no more than three Black players when he chose to start four. Mississippi state law prohibited its sports teams from crossing state lines to play integrated teams, but in the dead of night the team coach and players spirited away to Lansing, Michigan, to play Loyola. In an iconic civil rights moment, team captain Harkness shook hands with Mississippi State’s captain Joe Dan Gold at center court. Harkness also shook hands with Mississippi State’s center Stan Brinker prior to tip off, a groundbreaking moment captured and shared by national wire service photographers. Loyola won the game, 61-51.

Later that year, Harkness graduated with a B.S. in sociology, and the New York Knickerbockers chose him in the second round of the National Basketball Association (NBA) draft. He played only five games during the 1963-1964 season, and the team released him. Harkness then spent three seasons with the Twin Cities Sailors of the North American Basketball League (NABL), where he was named All-League (second team). He then secured a contract with the Indiana Pacers in the inaugural season of the American Basketball Association (ABA) in 1967.

Though he only played 81 games in the two seasons he was with the team, he made basketball history on November 13, 1967, when the Pacers played the Dallas Chaparrals. Trailing by two points with one second left on the clock, Harkness heaved the ball 88 feet away from the basket to lift the Pacers to a 119-118 victory. Many of the fans thought Harkness’ goal tied the game, but the ABA, unlike the NBA, permitted the three-point shot. Harkness’ buzzer-beater goal remains the longest game-winning shot ever made in a professional basketball game in the United States.

Jerry Harkness captain of the 1963 Loyola Ramblers is introduced at half time of the game between the Loyola (Il) Ramblers and the Mississippi State Bulldogs, 2012
Credit: David Banks-USA TODAY Sports
View Source

Despite all these contributions, Harkness still may be remembered most for the pioneering civil rights moment at the Game of Change. In 2009, Harkness’ son, Jerald Harkness Jr. produced a documentary about the Loyola-Mississippi State game. On July 11, 2013, Harkness and his former Loyola teammates met with President Barack Obama to commemorate the 50th anniversary of the school’s 1963 championship. That same year, the entire team was inducted into the Chicagoland Sports Hall of Fame, as well as the College Basketball Hall of Fame, while individually, Harkness was awarded the Muhammad Ali Athlete Award. In an impactful moment, Jerry Harkness and Mississippi State’s Stan Brinker also reenacted their landmark handshake in 2013 to commemorate the 50th anniversary of their matchup.